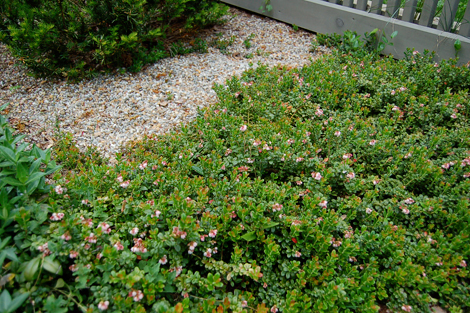 Each Spring, when the snow melts away, one of the first plants to appear is one of my favorite little groundcovers with a long Latin name.  It's Vaccinium vitis-idaea L. ssp. minus and we have a large patch of it growing just off the stone path at the entrance to the courtyard garden.  Also known as 'northern mountain cranberry,' you can tell by its Latin name that it is a member of the blueberry family.  Among its relatives are Vaccinium macrocarpon, the American cranberry, Vaccinium angustifolium, the lowbush blueberry, Vaccinium myrtillus, bilberry, and Vaccinium vitis-idaea, which is lingonberry (aka cowberry).


The mountain cranberry grows in northern climates as an understory plant in a variety of forest habitats and is able to survive poor soils and harsh conditions. In its native habitat, it can often go unnoticed.  But, here in mountainous New Hampshire, hikers and climbers usually spot it as they're sitting on a rock, trying desperately to catch their breath, while cursing whoever it was that talked them into such a difficult climb in the first place.  In at least four states, including Massachusetts, the plant is listed as endangered.  In the wild, the small berries of mountain cranberry are an important food source for a variety of birds and mammals.  The berries are also palatable for humans and, in Japan and Europe, the fruit is widely processed and marketed.  I have tried them.  They're not horrible but I'll stick to my Vacciniums in the form of blueberry pie, thank you.
In our garden we have mountain cranberry planted in soil that contains heavy amounts of gravel.  We started our approximately 30 sq. ft. patch in the courtyard garden with three very small plants and we have since divided many of the offspring of these parents to begin new planting areas in other parts of the garden. Here in our Zone 5, the plant has had no problem with the cold winters.  However, we get plenty of snow here ( plenty meaning enough, already! ) and new plantings of mountain cranberry can be at risk if the temperatures dip too low in the absence of protective snow cover.
The plant is evergreen and at this time of the year, the foliage of mountain cranberry takes on a wonderful burgundy tint.  As for warm summer days (where are you, by the way?) our plantings don't seem to be bothered at all with summer heat. They are all in full sun, with a good mulch of pea gravel which helps to retain adequate moisture.
Mountain cranberry is very low growing (2-6 inches) and grows in dense rhizomatous colonies that typically form mats.  The roots are extremely fine, fibrous, and shallow growing and so, until established, it is fairly easy to dislodge young plants if care is not taken.  Flowering occurs for us here beginning in late May.  It's not the kind of plant that will stop photographers in their tracks, but the small, pinkish, bell-shaped flowers are quite attractive as they appear in little clusters at the end of branch tips; fruit ripens in late August, early September. 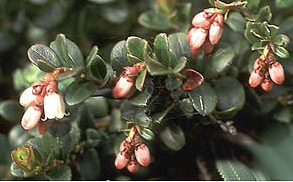 I have a love-hate relationship with a lot of ground covers.  Many of them are like relatives who have come to spend the weekend and end up staying a week.  Things start out pretty good but, before long, they've completely taken over the place.  Mountain cranberry is not like this.  It's polite, minds its manners, is easy to control and, unlike some relatives I know, doesn't drink all of your beer and wine.
Vaccinium vitis-idaea minus can sometimes be hard to find at local nurseries.  We obtained our first three plants from Uncanoonuc Mountain Perennials, in Goffstown, NH.  A little extra care has to be taken to get young plants feeling comfortable in their new location.  However, once established, mountain cranberry makes a beautiful spreading evergreen groundcover that brings with it both flower and fruit.  How many relatives do that?
Posted by Juniperhillfarm at 6:10 PM