The Featured Garden- The Gardens of Colonial Williamsburg 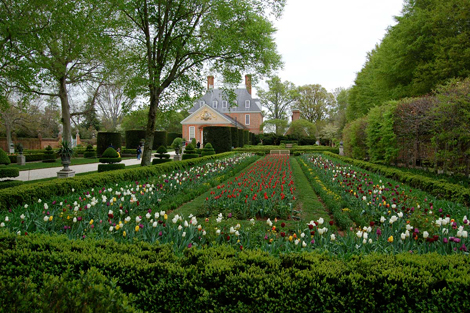 Last week marked the 65th annual Garden Symposium at Colonial Williamsburg which usually takes place during the first or second week of April.  Unfortunately, we didn't make it to Virginia this year but during our attendance at last year's symposium we had a chance to visit many of the wonderful colonial gardens scattered throughout the Historic Area.  For someone like me who is in love with colonial architecture, kitchen gardens, Williamsburg paint color charts, unique outbuildings, beautiful fences and gates, symmetry, and especially boxwood--this was heaven!

On the day before the symposium, we met Laura Viancour, Manager of Garden Programs at Williamsburg, who was to be our guide for the day.  And the first thing that Laura said to us was..."we need to get off the streets."  I did a double take, wondering if we were about to come under some sort of colonial attack?  What she really meant was that all of the interesting gardens at Williamsburg are behind the houses, not in front of them facing the streets, where most of the people hang out. How right she was.  And so, as the crowds of people continued to march up and down the main thoroughfares, we weaved in and out, cross-lots style, through gates and fences enjoying garden after garden that our little group practically had to ourselves. 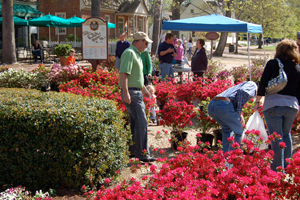 The first thing you notice about the gardens of Williamsburg is that almost all of them are enclosed by fences or walls.  Fences were actually required by colonial law to be built around each dwelling to keep out straying livestock.  The responsibility of protecting property and gardens from being destroyed by wandering animals rested squarely on the shoulders of the individual homeowner rather than the farmer who owned the livestock. 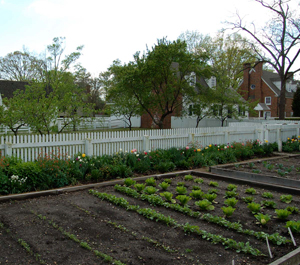 Most of the gardens are laid out in a geometric or symmetrical pattern with direct walkways connecting different parts of the garden.  Kitchen gardens were typically located closest to the house, for ease of access, with fruit and flower gardens in the middle, and meadow, grass or paddock areas furthest from the house. Outbuildings were typically located at these outer margins, as well. We have tried to adopt that same arrangement here at Juniper Hill, where useful kitchen gardens and more formal pleasure areas are located close to the house whereas meadows, utility areas, and livestock paddocks make up the boundaries. 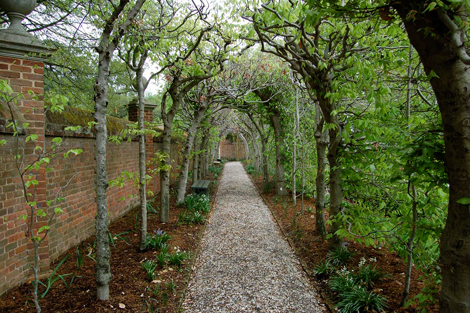 Colonial Williamsburg has come under heavy criticism for its idealized, manicured look that was certainly not typical of towns, or even individual homesteads, during that period of American history.  However, in 1926, when John D. Rockefeller, Jr. agreed to finance the restoration of Williamsburg, it was a time in our nation's history when there was a renewed interest in our colonial heritage, and many of the restoration projects that took place during this "colonial revival" period that immediately followed World War I, represent  a 1930's and 40's view of our past, rather than any accurate representation.
As for the gardens of Colonial Williamsburg, when the restoration of the town first began, there was little physical evidence of any 18th century gardens remaining.  The Colonial Williamsburg Foundation recruited the internationally known landscape architect, Arthur Shurcliff to help them with the design and plans for the gardens.  Shurcliff was a student of Frederick Law Olmsted, Sr., and helped with the design of Old Sturbridge Village, in Massachusetts.  Shurcliff began by documenting thirty-eight different southern colonial sites and the gardens that were associated with them. As a result of this intensive study, he came across a wealth of eighteenth-century garden plans drawn for North Carolina towns by the French landscape gardener, Claude Joseph Sauthier, who came to North Carolina in 1767.  The style and pattern of these early North Carolina gardens served as the inspiration for Shurcliff's final design plans for many of the gardens at Williamsburg. 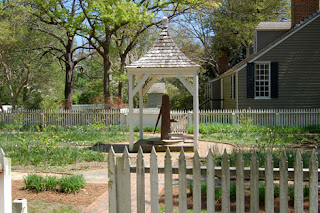 Today, at Colonial Williamsburg, there is an increased emphasis on archaeological research and as new information surfaces, many features of the gardens are often reconsidered in light of these findings.  As one writer put it, the historic area of Colonial Williamsburg "is a compromise between historical authenticity and common sense, between brutal realism and gentle ambience."
To see some Spring photos of Colonial Williamsburg gardens taken during our trip last year, click on the gate below.

To see more Featured Gardens, click here.
Posted by Juniperhillfarm at 11:23 AM