It's The Tall Season 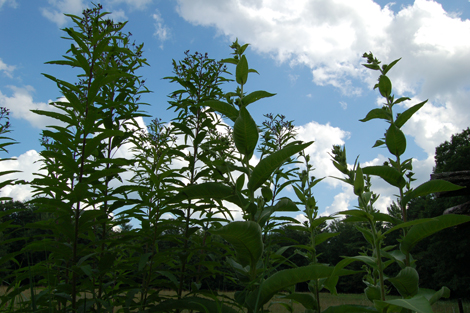 It's the tall season in the garden.  A chance for us to lift our eyes; to redirect our attention from all those front-of-the-border plants to those giants that have been gathering energy all summer long and now tower over the garden.

Read more »
Posted by Juniperhillfarm at 1:27 PM No comments: 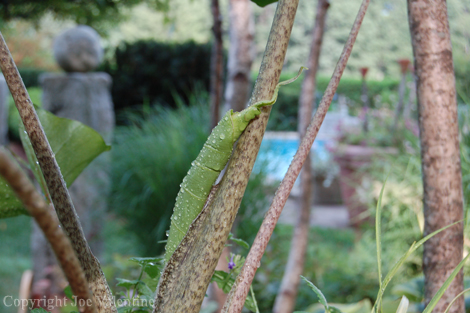 Being the "pest-imist" that I am, I'm always convinced that my garden is under attack from one insect pest or another.  I have therefore become pretty good at spotting many of these little evildoers, although usually not until they've destroyed most of what they set out to destroy while still having enough time left over for sex, thus guaranteeing that there will be another ten million of them for me to worry about next season.  That's why the other day, while walking through the garden, I stopped dead in my tracks when, out of the corner of my eye, I spotted what looked like one of those big, thick, green disgusting tomato hornworms (Manduca quinquemaculata) on one of my potted ornamental plants.  You see, it's tomato season and I've been having tomato hornworm nightmares every night so I thought maybe this was not so completely far-fetched.  Perhaps they've developed a taste for things other than tomatoes?  After all, their cousins (the equally disgusting Manduca sexta) eat tobacco plants even though I'm sure they know it's bad for their health. So, I immediately jumped to the only conclusion that an anxiety-ridden, sleep-deprived gardener could make, which was that the entire garden is now under attack from thousands of hornworms that will probably destroy everything from the asters to the arborvitaes.

Just Trying To Blend In 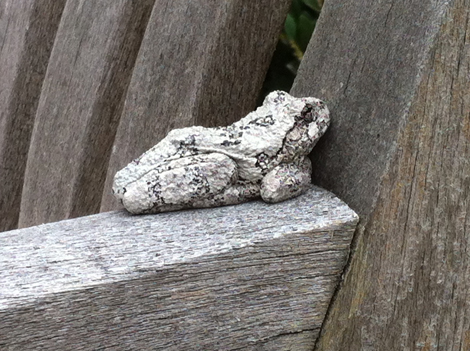 Often, the greatest entertainment in a garden comes not from the plants, but from unexpected sources.

Read more »
Posted by Juniperhillfarm at 10:26 AM 3 comments: