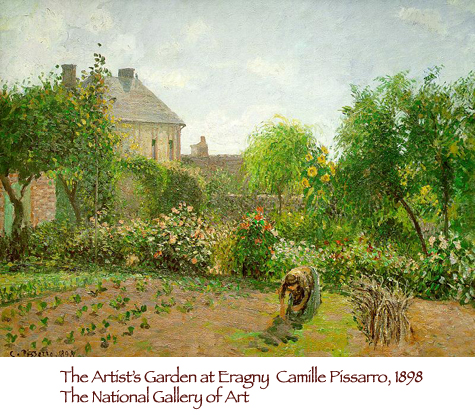 Known as the "Father of Impressionism", Pissarro painted rural and urban French life, particularly landscapes in and around Pontoise, as well as scenes from Montmartre. His mature work displays an empathy for peasants and laborers, and sometimes evidences his radical political leanings. He was a mentor to Paul Cezanne and Paul Gauguin and his example inspired many younger artists, including Californian Impressionist Lucy Bacon.

Pissarro's influence on his fellow Impressionists is probably still underestimated; not only did he offer substantial contributions to Impressionist theory, but he also managed to remain on friendly, mutually respectful terms with such difficult personalities as Edgar Degas, Cezanne and Gauguin. Pissarro exhibited at all eight of the Impressionist exhibitions. Moreover, whereas Monet was the most prolific and emblematic practitioner of the Impressionist style, Pissarro was nonetheless a primary developer of Impressionist technique. 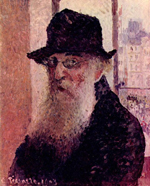 Pissarro experimented with Neo-Impressionist ideas between 1885 and 1890. Discontented with what he referred to as "romantic Impressionism," he investigated Pointillism which he called "scientific Impressionism" before returning to a purer Impressionism in the last decade of his life.
(text from Wikipedia.org)


For more from The Gallery, click here.
Posted by Juniperhillfarm at 9:33 AM

Email ThisBlogThis!Share to TwitterShare to FacebookShare to Pinterest
Labels: Pissarro, The Gallery