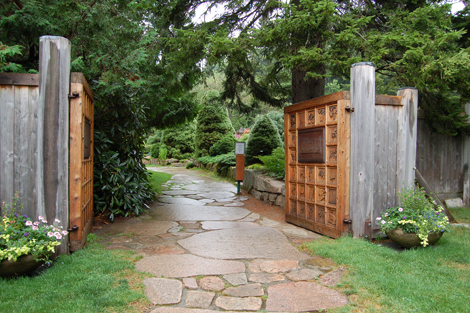 The Thuya Garden, in Northeast Harbor, Maine, was created by landscape designer Charles K. Savage in 1958, shortly after he created nearby Asticou Azalea Garden (see this earlier post).  However, where Asticou Azalea Garden is styled after a Japanese stroll garden, Thuya has a completely different feel.  Here, Savage gave a nod to the English style of gardening when he created an artful blend of semi-formal herbaceous borders framed by native eastern woodlands.  Like Asticou, some of the impetus to create Thuya can be attributed to Savage's efforts to save a part of the collection of plants belonging to landscape architect, Beatrix Farrand when her Reef Point estate in Bar Harbor, Maine was dismantled in 1956. Many of the original trees and plants in Thuya today were purchased from Reef Point and when you walk through the garden you can feel the influence of Beatrix Farrand as well as Gertrude Jekyll, the English gardener she most admired.

The bulk of Thuya Garden was constructed on what was originally the apple orchard belonging to Joseph Henry Curtis, a Boston landscape architect and civil engineer.  Curtis summered in this spot in Northeast Harbor from 1880 until his death in 1928.  He built a small rustic cottage here in 1916 that he named Thuya Lodge after the northern white cedar, Thuja occidentalis, which is so prevalent in this part of Maine.  He was one of the first of the 'rusticators', a group of wealthy, educated Bostonians who summered on Mount Desert Island in pursuit of the relaxation and inspiration that the landscape and seascape could provide.  However, the crowd that Curtis traveled with could hardly be said to be living the simple life.  Along with Harvard president Charles Eliot and philanthropist John D. Rockefeller, Curtis was instrumental in the establishment of Acadia National Park in 1901.


Shortly after moving to Thuya Lodge, Curtis constructed a 1/4-mile meandering trail, composed of switchbacks, that traverse the hillside leading from the Asticou Terraces boat landing to the lodge.  Thuya is one of the few public gardens in the country that is accessible by boat.  Today, visitors who use the Asticou Terrace Trail to access the garden (you can also drive) are treated to a a number of scenic views of Northeast Harbor as they make the ascent up the hillside.

Joseph Curtis passed away in 1928 but before that, in 1912, he bequeathed 140 acres of his property to the residents of Mount Desert Island that included Thuya Lodge, the Asticou Terraces and Landing, as well as the land on which Thuya Garden now sits.  Following Curtis's death, his long-time friend Charles Savage, owner of the nearby Asticou Inn, was appointed a trustee of the estate and held this post for 37 years.  During his tenure, Savage had an expansive vision for the property and launched a series of projects that would eventually transform Thuya into what we see today.  He renovated Thuya Lodge to accommodate a growing collection of botanical books and papers and installed Thuya Garden where the Curtis orchard once stood.  Savage would complete the garden in 1962. 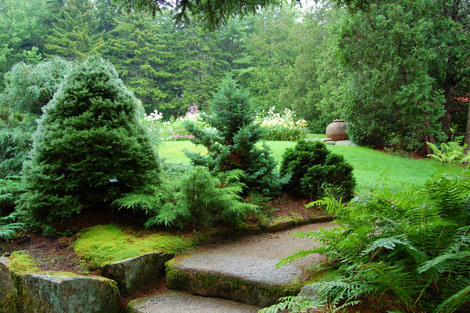 In the early 1990's, Landscape designer, Patrick Chasse, former garden curator at Boston's Isabella Stewart Gardner Museum, a resident of Mount Desert Island, and a noted authority on Beatrix Farrand, redesigned some paths and edited the two long perennial borders at Thuya.  Chasse altered the color palette of the borders to shift from warmer to cooler colors as the eye is lead toward the Upper Pavilion.

Although not a large garden, Thuya rewards the visitor with a unique, artistic blend of semi-formal English borders and indigenous woodland plants. It is also famous for its lilies and over 65 different varieties of dahlias.  Many of the older rhododendrons that border the garden were rescued from Beatrix Farrand's garden at Reef Point, in nearby Bar Harbor. 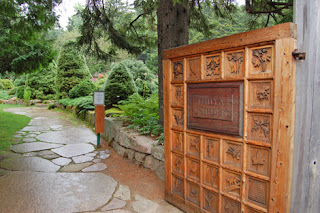 At the entrance to the garden are two beautifully carved gates that are comprised of forty-eight natural history images.  The gates were designed and carved in cedar and mahogany by Charles Savage with assistance from Augustus D. Phillips, a Northeast Harbor resident who would later establish a publishing business specializing in maps and postcards of Maine. 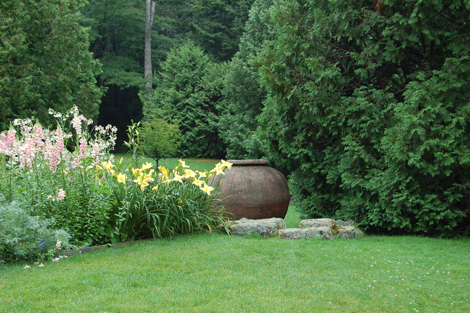 One of the focal points in the garden is the large jar that sits just adjacent to the Reflecting Pool.  It belonged to Beatrix Farrand and was designed and made by Eric Ellis Soderholtz, a pioneer in the art of pottery making using concrete as a medium.  Soderholtz was originally a photographer who began experimenting with methods of making concrete pots at his home in West Gouldsboro, Maine at the turn of the 20th-century.  On a visit to Gouldsboro, Beatrix Farrand stumbled upon his pottery making business and was so taken with his designs that she began to commission copies for herself as well as for some of her clients.  Original Soderholtz pieces are now in high demand by collectors (Martha Stewart has a collection at her Skylands estate on Mount Desert Island), however several replicas of his pots are being produced today by Lunaform pottery, in Sullivan, Maine.  There are several original Soderholtz vessels displayed throughout Thuya Garden.

Thuya Garden is open to the public from May 1st through October 31st and Thuya Lodge from mid-June through mid-September.  Both the Thuya Garden and the Asticou Azalea Garden are owned and operated by the Mount Desert Land and Garden Preserve, a Maine non-profit corporation.

For a photographic tour of the garden, click here.

Posted by Juniperhillfarm at 11:51 AM