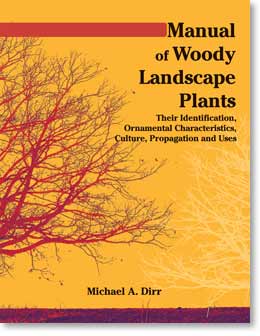 The Dirt on Dirr

Over 15 years ago my garden mentor and friend, Michael Gordon introduced me to Michael Dirr’s, Manual of Woody Landscape Plants, Their Identification, Ornamental Characteristics, Culture, Propagation and Uses. For me, a relatively young and aspiring gardener at the time, this book was not only expensive (and the most I had ever spent on a single book), but also daunting. Michael assured me that I would not regret this purchase. Suffice to say that my now tattered, dog-eared, and dirt-smudged copy, is testimony to Michael’s promise. It was first published in 1975, and has had many updates and revisions since that time, selling over 500,000 copies in this country and abroad. It is probably the most widely used and valued reference book on horticulture and landscape education, and considered to be the ‘bible’ for professionals, students and serious gardeners.

Recently I had the opportunity to hear this legendary horticulturist, prolific author and researcher who has dedicated his life to studying and educating others about the importance of using woody plants and trees in landscape design. 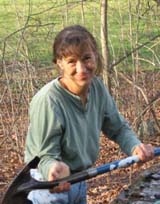 Dr. Michael Dirr holds both a Bachelor of Science and a Masters degree in Plant Physiology from Ohio State University. He earned his PhD in Plant Physiology from the University of Massachusetts. He has served as the Assistant Professor of Ornamental Horticulture at the University of Illinois, was a Mercer Fellow at the Arnold Arboretum at Harvard University, and the Director of Botanical Gardens at the University of Georgia, where he eventually returned to teach, from 1981 until 2007. It was here he fostered the Georgia Plant Introduction Program that gave birth to over 100 new plants, 13 of which he holds patents on. Although now retired from the University of Georgia he continues his work and research in plant propagation and development. He has received over 20 awards, including the highest honors from the American Horticultural Society, Garden Clubs of America, American Nursery and Landscape Association, and the American Society for Horticultural Science. A professorship has been created in his name at the University of Georgia in recognition of his accomplishments. And if that isn’t impressive enough he has also published more than 300 science and landscape articles, and 12 books.

As Dr. Dirr walked onto the stage in his well-worn baggy cargo pants, knit shirt and fleece vest he immediately engaged the audience with his wit and humor. This is not how I envisioned Dr. Dirr to look or act.  Somehow I was expecting a very scholarly looking and acting man. It was to my delight to discover how down to earth, gracious and funny he is. Brilliant goes without saying. In hand with my pen and notebook I had the intention of taking copious amounts of notes --a hope that I quickly relinquished. He speaks very fast giving a great deal of information dotted with jokes and stories I did not want to miss. So I put down my pen and listened, only jotting down a few important facts. 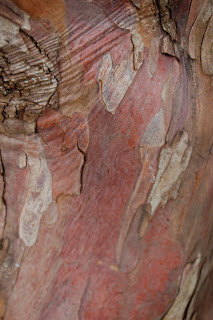 I cannot do full justice to his lecture from my notes, but I can tell you a few things he likes and dislikes and why.  He began by showing photographs of landscapes that were lacking interest. They were of houses framed with only one species of evergreen clipped to boring “meatball perfection.” He said never commit “The Three H’s” by planting any one of these as the only shrub in a landscape: “Hyews, Hollies, and Hunipers. Much laughter filled the room. He stressed the importance of using color. At first, this statement surprised me, but in this he means not only the colors of the flowers of shrubs and trees, but also the colors of the leaves and bark.

He has worked to propagate many of the plants he discussed in collaboration with Bailey Nurseries in St. Paul, Minnesota. He is absolutely ‘gaga’ for hydrangeas, and introduced the ‘Endless Summer’ (Hydrangea macrophylla) series, a Bigleaf, mophead Hydrangea which blooms on new and old wood in USDA, Zone 4 and above, from July to frost. His favorite: ‘Twist and Shout’ because it blooms all season and has a lovely red-burgundy fall foliage. 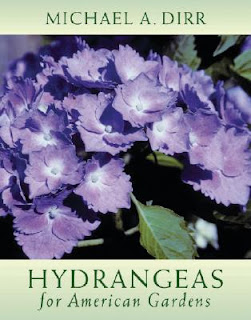 For bluer flowers he says to add aluminum sulfate to the soil and if pinker flowers are preferred add lime. Among these he likes ‘Lady in Red’ for its strong stems, red fall color and lacecap blooms. Also ‘Blushing Bride’ for its cold hardiness and remontant blooms. He said ‘Bounty’ and ‘Mary Nell’ also have strong stems. ‘Mary Nell’ is noted for its showy sepals. He advises against ‘Invincible Spirit’ because it’s prone to flop. He spoke highly of ‘Little Lime,’ but noted it needs sun. He likes ‘Quick Fire’ better than ‘Pinky Winky’ for our New England climate. He recommends full white, strong-stemmed ‘Silver Dollar’ (Hydrangea paniculata), a RHS Garden Merit Award winner, noted for its quality of flowers, foliage and habit. For more information on hydrangeas see Michael Dirr’s book, Hydrangeas for American Gardens, and you can read his article, “Hydrangeas: Breedings, Selection, and Marketing.” 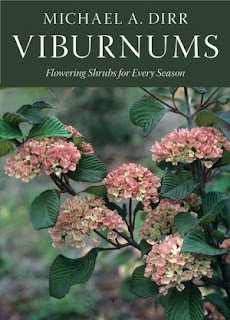 As for Viburnums, Dirr says, ‘they have an understated beauty and that a garden without viburnums is like a life without the pleasures of music and art."  There are too many cultivars to mention here, but much more can be found in Dirr’s book entitled, Viburnums, Flowering Shrubs for Every Season. You can also read more of what he says about viburnums for American gardens by clicking here.  He stressed that Viburnums are invaluable for their fruits and flowers (some being fragrant), growth habit from shrubs to trees, foliage textures and colors, ability to adapt to different environments, and are virtually pest free. Most are drought-tolerant and can also handle wet conditions. There are over 200 species worldwide, with over 120 in North America alone. A few he mentioned as favorites were, ‘Viburnum rafinesqueanum ‘Louise’s Sunbeam’ with shiny yellow foliage in the spring turning bronze in the fall make it a good choice especially for a shady border or woodland under-story shrub, or planted en masse for its magnificence. Also Viburnum plicatum types for their showy flowers, such as ‘Popcorn’ (also resistance to beetles), ‘Pink Sensation’ and ‘Spellbound’ (available soon) for their ability to tolerate heat.

Here are a few plants that Dirr likes:

Hypericums because they are essential for bees and butterflies. Buddleias for butterflies, hummingbirds and fragrance. He spoke highly of the “Buzz Series” for their scent and repeat blooming ability with ‘Red Attraction,’ ‘Miss Molly,’ and ‘Miss Ruby,’ being hummingbird favorites. Dirr wants every garden in New England to have a Lilac. He mentioned Syringa 'Betsy Ross’ for its white flowers and because it’s disease and mildew resistance. Dogwoods for winter bark color and adaptability.  Also Clethra ainifolia ‘Ruby Spice’ a native shrub which is tolerant to a variety of conditions, no known diseases and very fragrant. He is among many of us who love Boxwoods, but warned of the boxwood blight with no current cure. See Joe’s earlier post here on Notes from Juniper Hill, “Confessions of a Boxwood Lover.”

... yellow spiraeas, except for Spiraea thunbergii 'Ogon.' Actually he is not fond of pink spiraeas either but did give a thumbs up for Spiraea thunbergii ‘Fugino Pink’ for its lime-colored foliage and pale pink flowers.  He said there are too many red maples and the Bradford Pear is over-used and invasive. And you all remember not to commit to the dreaded “Three H’s,” right?

Michael Dirr had a few comments on “Noble Trees” and you can read his article In Praise of Noble Trees by clicking here. Some of the reasons, and there are numerous, for planting noble trees is for their aesthetics, shade, storm water mitigation, landscape value, and food and shelter for wildlife. They span generations, are architecturally elegant, inspiring, spiritual, and beneficial to the environment. He refers to a great book on trees entitled, New Trees: Recent Introductions to Cultivation with outstanding descriptions on trees, which have landscape merit.

Cercidiphyllum japonicum-Katsura with its blue-green leaves which turn yellow-apricot-orange in the fall when its leaves give off a cotton candy aroma. I fell in love with this tree when Mike Gordon took me to see a magnificent stand of them, lining the drive to the entrance of Regis College in Weston, Massachusetts. This is worthy of a road trip as it’s an unbelievable sight and aroma in the fall.

Betula nigra-River Birch, which is resistant to borer, heat tolerant and hardy to Zone 3 and compliments many garden landscapes.

Cercis Canadensis-Redbud, which he said, “should be the national tree.” There are over 35 cultivars. Dirr recommends ‘Ruby Falls’ for a weeping habit, ‘Hearts of Gold’ for yellow foliage, and ‘Columbus,’ ‘Joy’s Pride,’ ‘Northland Strain’ and ‘Royal White’ as the most cold-hardly, white flowered forms. He notes if the leaves are pinkish in hue, the flowers will be pink, and if the leaves have white in them, the flowers will be white.

One of his favorites for exfoliating bark is Corylus fargesii-Farges Filbert, which he feels has been overlooked as a viable shade and ornamental tree. In Arnold Arboretum there is a 20’ specimen of this tree. This tree is resistant to eastern filbert blight.

Another favorite is Parrotia persica ‘Persian Spire’ for its year-round interest, ease in growing, reddish-purple leaves in the spring, green in summer and yellow to scarlet in the fall. The bark exfoliates with age in tones of gray, green, white and brown, and it has tiny red flowers in winter.

Again, the list is vast, so do take a look at his article entitled,  In Praise of Noble Trees.  Of course, for more in depth information do get yourself a copy of Dr. Dirr’s Manual of Woody Landscape Plants. I can now pass on Michael Gordon’s wise words, “you will not regret it.”

As a side note to the lecture, I must mention Michael Dirr’s wife, Bonnie, who was in the audience. He bantered back and forth with her during the lecture in a delightful manner. She appeared soft-spoken and humble, but it should be noted that she illustrated many of his books and periodicals, and quite beautifully I might add. It was clear that their marriage is quite a unique collaboration of many passions.

Finally, on the screen at the end of the lecture were these words, which I did manage to jot down.

The true meaning of life is to plant trees under whose shade you do not expect to sit. – Nelson Henderson


Note:  There is good news for all you mobile device users.  Dirr's Tree and Shrub Finder, which is based on the Manual of Woody Landscape Plants, and includes over 10,000 woody plants, 7600 photos, and the ability to search across 72 unique criteria, is now available for the Iphone, Ipod Touch and the Ipad through the Mac App Store.  To preview, click here.

Posted by Juniperhillfarm at 11:11 AM