It's time to mark your summer calendars for visiting some of the best private gardens in New Hampshire and Vermont.  On three separate weekends in June, July and August, The Garden Conservancy will open the gates to seventeen beautiful and unique gardens in Vermont and New Hampshire as part of their annual Open Days Program. 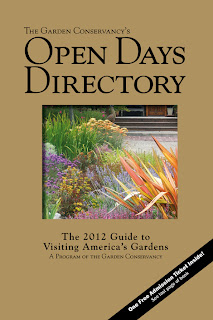 Since 1995, nearly 3,000 gardens nationwide have participated in the Garden Conservancy's Open Days Program welcoming close to 1 million visitors.  The Garden Conservancy is a national organization with a mission to preserve American gardens for the education and enjoyment of the public. The organization seeks to develop and deepen public appreciation of gardens as integral elements of our national artistic and cultural heritage.  The Open Days Program serves as the primary educational outreach for the Conservancy.

Following is a list of this year's Open Days gardens in New Hampshire and Vermont with descriptions written by the gardeners themselves.  For up-to-date, detailed information on these gardens and how to order tickets or your copy of the 2012 Open Days Directory, which lists hundreds of gardens open across the country, visit the Garden Conservancy's website at www.gardenconservancy.org.

Originally a hillside farm with a rambling house, barns, stone walls and fields, and views of neighboring farms and distant mountains, the garden has grown to include perennial and shrub borders, rock gardens, and a vegetable garden. The main flower garden began as an old-fashioned mixed border of delphiniums, hollyhocks, phlox, and shrubs. Other borders feature shrubs and perennials for texture and foliage with willows, dogwoods, aralias, rhubarbs, and acanthus being the main focus. The remnants of the barn foundations offered a good setting for rock plants, ferns, and ornamental grasses.

This is a dynamic garden that has evolved over the past thirty years. It combines an extensive collection of plants in a natural setting, giving it year-round interest, continuity of style, and an intimate appeal.  The various garden areas are defined by the meandering paths and the creative use of native stone.  The vast variety of plant material and its arrangement will interest the seasoned collector, the student of design, as well as any garden enthusiast. Hundreds of alpines, dozens of dwarf conifers, countless bulbs, interesting ground covers, native and exotic woodland species, unusual trees, and many old favorites make this garden unique. A cutting garden of mixed perennials and annuals, a vegetable garden, and apple trees provide beauty and bounty.

The gardens were designed and installed by Wayne Winterrowd and Joe Eck in 2003. Entry to the gardens is through a woodland garden path (Cyperpedium reginae should be blooming) and a white garden. The main gardens are terraced on a slope leading down to Occom Pond. There is a trough garden at the top with many different alpines, followed by terraces devoted to strawberries and a cutting garden, dwarf conifers, a large border at the bottom level together with a vegetable garden, and woodland gardens on either side.

The herb, vegetable, and flower gardens that surround my 1816 farmhouse and barn are always a work in progress. Since last on tour five years ago, I have added two large retaining walls, a forty-foot arbor, and increased the size of all of the beds. Recently I have been refining my gardens by decreasing the number of plant varieties in each bed and increasing, by division, the size of the plants remaining.

NELSON, NH
The Garden of Rebecca Henderson and Harry Huchra

Presently the garden is a robust and charming infant, changing and developing rapidly, not even on the threshold of adolescence, and far from the confident and blissful maturity which surely lies ahead. Ground was first broken in the summer of 2010, when the formal arrangement surrounding the house was laid out. There is a stunning view of Mount Monadnock to the south, which was enhanced by clearing trees to broaden the sloping meadow. In 2011, the important edible theme was expanded to include formal kitchen gardens, orchards, nut trees, and contrasting woodland. The owner, Rebecca Henderson, has an English background and a love of Italian landscapes. Her vision, which is being realized by designer Jenny Lee Hughes and company, combines parkland qualities of English estates and the formality and gaiety of Italian design.

The garden consists of more than forty garden areas connected by staircases, pebbled or grass walkways, and spread over a twelve-acre site. They include level spaces and terraced areas designed to accommodate the significant elevation changes on the property. Styles range from formal near the house to less structured closer to wooded areas, a number of water features including numerous pools and two ponds, and a large perennial garden. Some striking features are a 300-foot sycamore allée, a series of semi circular terraces bordered by standard Korean lilacs, an arboretum, an allée of 110 crabapples that border an acre garden, and an orchard of twenty fastigiate hornbeams underplanted with European ginger. Designers Gordon Hayward and Doug Hoerr have contributed to the design.

The Garden of Michael and Betsy Gordon

This is a small village garden designed by a plantsman to be an extension of the house. The house and garden are situated on a hill and the garden is terraced on three levels. The two upper levels are laid out formally with yew and boxwood hedges. The lowest level is an informal woodland garden and is a work in progress. The garden is planted with a mixture of unusual trees, shrubs, perennials, annuals, and bulbs. Plants were selected primarily for interesting foliage and textures.

With dramatic views of Mount Monadnock and the Pack Monadnock range, the large open spaces, woods and colorful gardens of this sixty-acre, ridge-top property afford a variety of ways to enjoy the New Hampshire landscape. The current owners bought the property as a country retreat in 1989 and have worked extensively with their landscape designer, ZEN Associates, to establish an environment that complements and enhances the natural topography.

The vision of our garden flows from the wonderful natural setting of the original farmstead with its rolling hills, open grassy fields, ledge outcroppings, mixed hardwood and pine woods, and mountain views. Utilizing this landscape as the backdrop, a series of planting areas branch out from the house into the fields. These areas feature flowering trees, shrubs, and perennials. Old stone foundations and border walls have been reworked into freestanding fieldstone walls and terraces, which serve as integral elements tying together the total design.

The gardens were started in 1990 and planted slowly over the years. The many shrubs, small trees, and stones have transformed a rolling hay field into a four-season sculpture garden. A refuge where the combined forms, textures, and shapes of the plants and stone are at least as important as the numerous flowers and their colors. Neither wild nor formal, the gardens are an attempt to take the beauty of the natural world and add to it the creativity of man. Learn more at www.distanthill.org.

Self-designed and composed amid private grounds in southern Vermont. The North Forte is filled with classic perennials and shrubs, native Vermont bluestone walls, and striking architectural elements.  Stroll the paths by the two waterfalls and koi ponds and continue over the garden bridge while viewing the Knot Garden. Continue through the garden gate to the roses and hydrangeas to the pergola and the Sculpture Garden.

Created by landscape designer Robert Gillmore, Evergreen is an “idealized” woodland comprised of mature white pines, broadleaved evergreen shrubs—including sweeps of 172 Rhododendron maximums and 112 Catawba rhododendrons—plus colorful evergreen groundcovers and other low-maintenance, shade-tolerant plants. The one-acre garden is ringed with berms, some of them twelve feet high and all planted with rhododendrons which screen the garden from neighboring houses.

Stone paths lead from the beautiful Japanese gate into a mounded and sculpted garden. Large granite slabs and boulders were used to separate the area into garden rooms, including a thyme garden and Zen garden. Groundcovers and dramatic weepers dominate. The back of the house, where you will arrive, is the focal point from inside where there are large wood elements with an Asian flair. A stone gateway, cleared ledges, two small ponds, and a ten-acre pond in the distance create tranquil vistas.

An old-fashioned flower garden, based on the English style. There are flower borders, a vegetable garden, an herb and rose garden, a pond garden, and a rock garden. The gardens are characterized by abundant free-form plantings bordered by straight edges and geometric evergreens.

Tiffany Gardens is a one-acre residential garden named after the most beautiful flower in our lives, our daughter. More than twenty garden beds are connected by grassy paths that wind throughout the property, revealing one spectacular view after another. Each garden features a large stone topped with whimsical garden art collected over the years. Water features include a fish pond, waterfall, fountain, and reflection pool. More than 300 varieties of evergreen and deciduous trees and shrubs are labeled, making this garden adventure as educational as it is delightful.

This garden began fourteen years ago as a clean slate. Over the years, the expanding collection of unique perennials needed more beds quickly so she worked with a landscaper to design and incorporate natural stone walls, a multi-tiered pond, and a patio constructed of native fieldstone and hand-cut granite. The stonework provides a structural sense of permanence to the property, but perhaps the most impressive aspect of these Windham gardens is the vast, ever-changing display of perennial color punctuated by specimen varieties of conifers and flowering shrubs that is the result of Danielle’s artistic eye and persistent hard work.

Gordon and Mary Hayward’s one-and-one-half acre garden surrounds their 240-year-old farmhouse in southern Vermont. Over the past twenty-six years they have developed a hybrid of Old England and New England gardens to reflect Gordon’s past growing up on an orchard in northwestern Connecticut and Mary’s past growing up on a farm outside Chipping Campden in the North Cotswold Hills of England. The garden, the subject of their book The Intimate Garden (WW Norton, 2005) is comprised of fourteen garden rooms.  For more on the Hayward garden, visit www.haywardgardens.com.

Self-designed and composed amid private grounds in southern Vermont. The North Forte is filled with classic perennials and shrubs, native Vermont bluestone walls, and striking architectural elements.  Stroll the paths by the two waterfalls and koi ponds and continue over the garden bridge while viewing the Knot Garden. Continue through the garden gate to the roses and hydrangeas to the pergola and the Sculpture Garden.

Posted by Juniperhillfarm at 5:01 PM