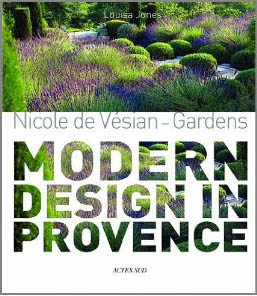 by Louisa Jones with photographs by Clive Nichols and Vincent Motte
Actes Sud, 2012

Everyone has their list of favorite gardens that they have visited over the years.  And most of us also have a wish list of gardens that we would like to visit someday.  Sitting at the very top of my wish list for many years has been La Louve, the Provencal garden of Nicole de Vesian.  I have collected many photos and magazine articles about this garden but the new book by Louisa Jones, with many of the photographs by Clive Nichols, is the first complete monograph to date on de Vesian's contemporary masterpiece and probably the closest I will come to a real visit to this garden without actually hopping on a plane to France.


Nicole de Vesian (1916-1996) was a prominent fashion designer in Paris and New York.  After her retirement at age 70, she turned her skills to the creation of several gardens in France.  She purchased La Louve--a ruin in the hilltop town of Bonnieux that was named after the last she-wolf seen in the Luberon region of Provence--in 1986, without ever having seen the inside of the house.  At the time, Nicole was attracted more by the surrounding landscape, with all the interesting rocks and stones strewn about the property, than the architecture of the house. I suspect that her keen instincts as a designer told her that it would be a relatively easy job to reconstruct a house to her liking.  Yet, to make a garden that would blend seamlessly with its surroundings would be a totally different matter; one that deserved some deliberation. The site was important.  According to Louisa Jones... "In current jargon, [Nicole de Vesian's] gardens were always 'site-generated' and 'site-determined', inspired by the character of each place, never the result of an abstract plan or some pre-established model to which everything was adjusted to fit."

Along with her attraction to the natural rock and stone that characterizes the heavily terraced countryside in the region of France that she would call home, Nicole also had a preference for the soft and subtle hues of the native plants that grew there; especially the muted greens and blue-grays of the trees, herbs and shrubs whose colors are only enhanced by the special light in that part of the world. As if part of a long-hatched plan for La Louve, Nicole came to rely on that subdued color palette of greens and grays in her choice of plant material which she would then blend artistically with the more neutral colored rock and stone that was used in the construction of the terraces, pathways, stairs, benches, containers, and many separate rooms that made up her garden. Together, an emphasis on the use of stone and a tapestry of gray-green plants would come to define her style of Provencal gardening.

Nicole de Vesian always embraced and assimilated nature (even in the style and color of the clothing she wore) rather than trying to be at odds with it.  As Jones recalls, "Once established at La Louve, Nicole had begun to resemble her garden: hair pulled back tight, burnished face, clothes in rough linen or wool, perfumed only with lavender essence."  She took inspiration from the way the native plants of the region were shaped, and often misshaped, from recurring drought and the sometimes relentless, desiccating winds of Le Mistral; and through her own interpretation of this look she became famous for her clipped, sculpted, and minimalist style of gardens that blended harmoniously with the surrounding French countryside.  In turn, her work inspired a whole new generation of artistic landscape sculptors like the late Alain David Idoux and Marc Nucera who would eventually become part of a burgeoning landscape art movement in France.  It was a style of gardening, almost completely devoid of flowers, that in a very short time influenced garden designers and gardeners around the world and truly defined what it meant for a garden to be imbued with a sense of place. As Louisa Jones put it..."Nicole de Vesian had a feeling for space the way some musicians have perfect pitch--for volumes, planes and textures, all transformed by the liquid Mediterranean light."

Louisa Jones has been called the doyenne of French garden writers, even though she is Canadian by birth.  She has been living and gardening in France since 1975 and during that time has chronicled the world of French gardening, garden history, and the culture of southern France in over twenty books.  She was a close friend of the late Nicole de Vesian and the special intimacy that they shared is certainly evident in the beautifully written text.  The 160 pages in this masterful book include a foreword by Christian Lacroix, remembrances by gardening friends of Nicole's like Christopher Lloyd and John Brookes, Gardening tips from Nicole herself, and page after page of gorgeous photos by Jones, French photographer Vincent Motte, and one of my favorite garden photographers, Clive Nichols, whose photos of La Louve practically radiate off the page. This book already assumes a prominent place in my own gardening library and it's one that I'll refer to again and again for inspiration.

For more featured books from The Garden Bookshelf, click here.

Posted by Juniperhillfarm at 10:34 AM