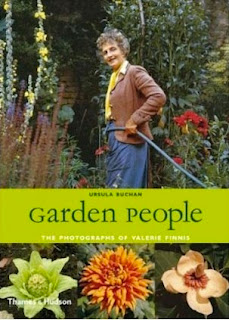 I simply loved this book!  Although not a recent release--it was published in 2007--it's a photographic history of a class of gardeners who pre-date the "age of the garden designer."  These were real plantsmen, as both men and women were referred to in those days, whose knowledge of horticulture was only complemented by their eccentricities.

For many years, Valerie Finnis was a teacher at The Waterperry School, in Oxfordshire, UK, a "school of horticulture for ladies" that was run by the famous and indomitable Miss Beatrix Havergal.  The school was established as a training ground to educate women in every aspect of horticulture which, up to that time, was a field of endeavor dominated by men.  Some of England's most famous and influential gardeners were graduates of Waterperry, including Sibylle Kreutzberger and Pam Schwerdt of Sissinghurst fame (see recent post on Sibylle Kreutzberger by clicking here).  There is a wonderful article on the gardens of Waterperry, as they look today, by Alison Hoblyn in the recent issue (November, 2011) of The English Garden magazine.  To check out the Waterperry Gardens website, you can click here.

Below, is a review of Garden People from IndieBound.

A charming photographic record of the English gardening scene by one of the best-known figures in postwar British horticulture.

Nancy Lancaster, society hostess and interior designer, sports an elegant straw sombrero and snips delicately at her roses, while Mr. Shepherd, her gardener, wields his shears and neatly clips the topiary at her house, Haseley Court. They and many other dedicated gardeners are captured here by the discerning eye of Valerie Finnis—with just the gentlest touch of humor—in her photographic portraits.

A well-known and well-loved figure in postwar British gardening, Finnis was also a talented photographer. With great skill and verve, she took photographs of gardeners, gardens, and plants from the mid-1950s on, using a Rolleiflex camera that had been given to her by a friend.

Together with her husband, Lord David Scott, Finnis traveled through Great Britain, meeting the famous—Vita Sackville-West at Sissinghurst, Lady Birley at Charleston Manor, Roald Dahl and his family at Great Missenden—as well as less-known gardeners, nurserymen, plant enthusiasts, designers, and artists. All are seen at home in their gardens, weeding, inspecting, watering, and standing proudly by their plants, wearing the fashions of the day, epitomizing life and society in the second half of the twentieth century. 200 illustrations, 100 in color.


For more featured books from The Garden Bookshelf, click here.

Posted by Juniperhillfarm at 2:00 PM