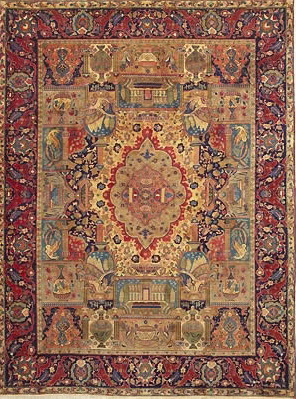 I don't usually think of carpets when I think of garden art but perhaps I should.

In his latest book, Harmony: A New Way of Looking At Our World, Prince Charles talks about the transmission of certain "patterns of life" that have remained unchanged since neolithic times.  Apparently, there are women in Turkey today who are weaving kilims (small carpets) using the very same patterns that have been found on some of the oldest neolithic cave murals known to man.  When asked about the patterns, these semi-nomadic women have no idea how they know them.  They carry their small looms with them from one location to another and, once set up, their fingers simply begin to move without referring to any design.  The patterns are not written down anywhere.  The young girls sit by their mothers as they weave and the counting of the knots is passed along from one generation to another as a kind of language. Prince Charles goes on to say:

"Something as practical as a Persian carpet shows how these patterns have remained true to what they once represented.  The textile museum in Washington DC has a vast collection that spans 5,000 years of history.  Many of them are the famous Persian 'magic carpets'.  This name has more meaning than might first appear.  They were called 'magic carpets' because they have the capacity to transport us to another place.  The carpets represent the designs of Islamic gardens which are based upon the grammar of harmony...  So, in effect, these carpets were mobile gardens.  When people journeyed through the desert they would take these carpets with them and roll them out under their tented pavilions at night so that they could once more benefit from contact with a garden.  Not because they wanted to have flowers in the desert, but because a garden in the Islamic tradition is symbolic of the inner sanctum of the heart.  The soul itself is seen as a garden, the garden of paradise, and so the 'magic' carpets transported the desert traveller to humanity's true home, to the paradise within."

As an aside, the 17th-century carpet pictured in the photo above generated it's own sort of magic when, not long ago, it broke a record by selling at Christie's to an anonymous bidder for $9.6m.

I find all of this stuff about the transmission of certain patterns of life and textiles fascinating.  Because, up until now, all I ever knew about magic carpets I learned from Steppenwolf.  And, I might as well head off the one big question that's bound to come up after some of you click on the video below:  Yes, kids--except maybe for Prince Charles--at one point not too long ago we really did look like that!

Email ThisBlogThis!Share to TwitterShare to FacebookShare to Pinterest
Labels: The Gallery