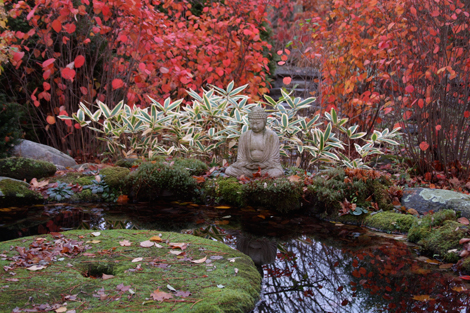 The Fall Garden on November 7

I was walking in the garden yesterday late afternoon. With sunlight raking in through a cloudless sky, I was struck by the fact that this is one of my favorite times of year out there. Leaves on native trees such as maples and ashes have fallen yet the garden glows. (In large part this is because so many garden worthy shrubs and trees hold their foliage in the autumn well beyond those of native plants.) We’ve cut back all herbaceous perennials and stored pots, garden ornaments and furniture in the barn. In doing so, we’ve revealed the pure structure of the garden: trees, shrubs, hedges and built structures all set on a much more apparent lawn. The garden at this point in the year is so spare that the clarity of the late afternoon light reaches every corner. 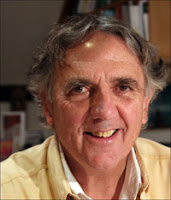 In doing so it lights up certain plants and their fall foliage so you really can say that many woody shrubs are at their annual peak in late October or early November here in the North Country.  The foliage of Fothergilla gardenii, Acer aconitifolium and Acer pseudosieboldiana turn a deep, sometimes shocking red here in our garden. Spirea thunbergii ‘Ogon’ turns yellow pink; Hamamelis ‘Pallida’ goes yellow, as does the cascade of needles on the weeping larch we planted next to the red-leaved Acer palmatum ‘Twombly’s Red Sentinel’. 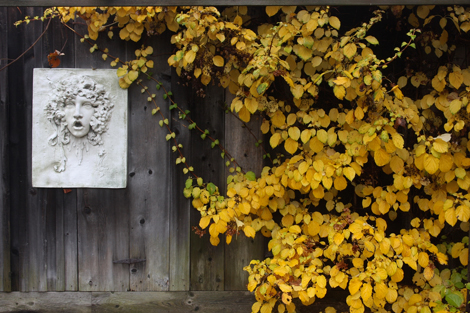 Many of our magnolias turn bronzey brown as do the leaves of Acer triflorum and our young American beech hedge. We can see the bright yellow leaves of Clethra alnifolia across the garden as well as the yellow-brown leaves of the three pin oaks out in our bright green meadow. (The leaves of our fastigiate ginkgo fell in unison ten days ago.) The foliage of Physocarpus ‘Diablo’ turns an even deeper purple this time of year and sets off the lasting foliage of our pollarded silver willows. 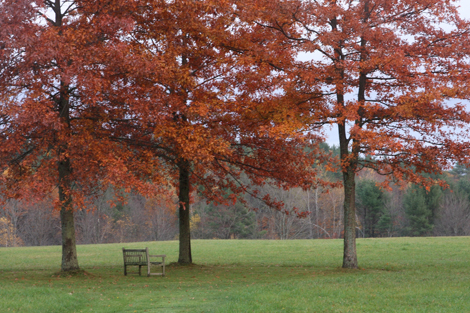 Hedges of taxus and buxus take on new meaning too. All spring, summer and early fall, their role was to act as a backdrop for showier perennials. But now, with herbaceous material cut back, they move forward. Their role of containing and defining space is strengthened, yet some still act as backdrop. One 6’ taxus hedge by the barn sets off the striking red fruits of Sorbus alnifolia. Another hedge of 9’ high Viburnum prunifolium that encloses the herb garden turns a deep red this time of year. From countless places in the garden, we see yellow, orange or red foliage in the foreground and the deep red of the tall and long Blackhaw Viburnum hedge in the background. 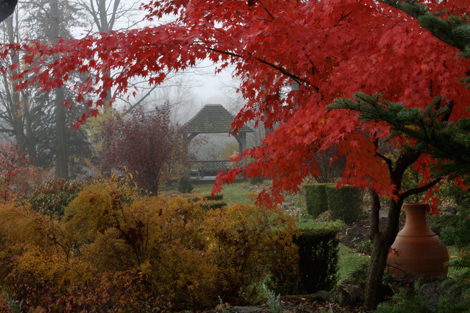 Because of the sheer size of shrubs and trees and their dramatic late fall foliage, the garden takes on a new drama when seen through the windows of the house. As I walk from window to window, I look out at color combinations that simply are not there during the rest of the year and on such a scale. As I sit here in my second floor office in the barn, the window panes and sashes, all of which look out on the garden, act like picture frames. Out of a south-facing window I see a layered painting of red fruits on the gray branches of the Sorbus alnifolia against the green of a yew hedge as well as the bronze leaves of Magnolia ‘Miss Honeybee’ behind which is the deep red of the black haw hedge.

All photos of the Hayward gardens in Westminster West, Vermont by Gordon Hayward.

Posted by Juniperhillfarm at 10:19 AM