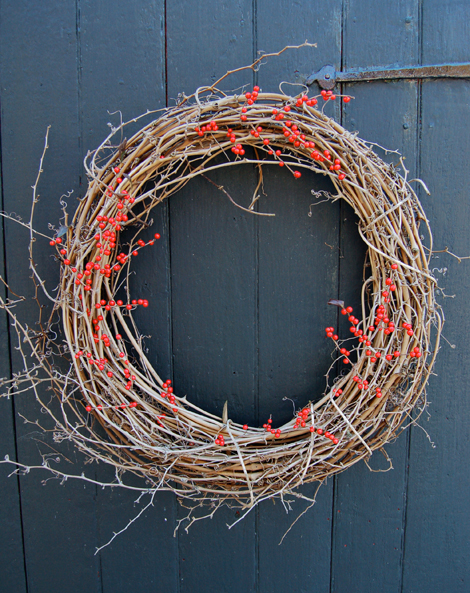 It's that time of year when the winterberries are beginning to stand out like bright red flags along the edges of many of the wetland areas.  I have already seen several people in their wellies, wading ankle deep into the marsh, with pruners in one hand and a copy of Martha Stewart Living in the other, cutting them for holiday decorations. 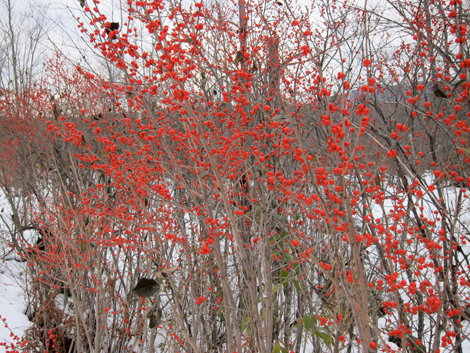 Winterberry is actually a native holly (Ilex verticillata).  It's the most northern growing holly and is sometimes called black alder or northern holly.  There are lots of plants in the northeast with red berries but winterberry is one of the most popular for holiday decorating.  There's no doubt that much of its popularity as a garnish for pine, balsam and fir is due to the fact that it often grows close to roadsides within plain sight of scurrying holiday motorists and, with just a minimum amount of sneakiness required, is free for the taking at a time of the year when it's the only thing on the planet that's free for the taking. 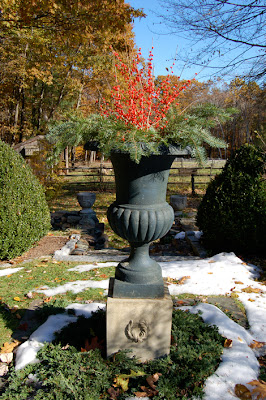 This multi-stemmed shrub is more than happy to have its roots submerged in water and thus is often found at the edges of ponds, steams and marshes. It spreads fairly quickly, grows in colonies, and given its affinity for wet spots, I wouldn't be surprised if I found it growing in our basement someday during the spring thaw. Unlike the other hollies that grow further south, winterberry sheds all of its leaves during the winter.  The plant spreads by suckering, layering and seeds, and only the female plants produce the red berries.

Unlike many of the modern cultivars of holly, winterberry is a very popular plant with the birds,  providing winter food as well as shrub cover in the spring for species like red-winged blackbirds.  So, as we prepare to put together our fall floral arrangements or add a little red zing to our holiday wreaths, we need to remember to go a little easy on the glue gun and leave some of those bright red berries for the birds.

Posted by Juniperhillfarm at 9:49 PM

Email ThisBlogThis!Share to TwitterShare to FacebookShare to Pinterest
Labels: Winterberry