Even if the only gardening you've ever done was to hang a pot of petunias on the side porch, you have probably heard of Tovah Martin.  She is a legendary and passionate gardener with experience that runs deep.


For 25 years she was with the famousLogee's Greenhouses in Connecticut and then with White Flower Farm.  She is the author of over a dozen gardening books, including the best-selling Tasha Tudor's Garden, and her latest book, The New Terrarium, has been recommended reading by the New York Times Book Review.
She is a prolific writer and contributes to many of the top-selling home and gardening magazines, including Country Gardens, Horticulture, Garden Design, and Country Living.  She also writes her own gardening blog, Plantswise, and is a regular contributor to the popular blog, Gardening Gone Wild.

When she's not writing, lecturing, or appearing on TV and radio, she is singlehandedly maintaining her own 7-acre organic property that includes perennial borders, berry, vegetable and herb gardens.

In the entry below, Tovah describes that wonderful interplay between light, shadow and the mid-season garden. 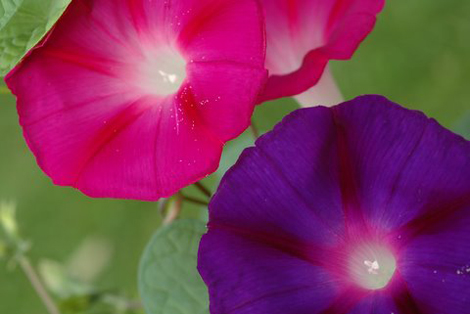 Let There Be Light
In the beginning, there were morning glories.  Even before the first day crept in, a morning glory unfurled in the fond expectation that there would be light.  And sure enough, dawn followed.  Somehow, morning glories have always held that trust.

Dawn slips in on pussy toes, just as dawn always does.  It’s a furtive thing, initially noncommittal.  It’s full of promise, but slow on action.  There’s a hush, the faintest color glows in the vastness, and then a gradual brightening highlights the dark.  Like expression overcoming a deadpan face, like discovery prevailing over mystery, a blush enhances the sky until, before you know it, the day is nearly full blown.  It’s all painfully subtle, that’s illumination for you.  The soul of discretion. But when, it comes, the morning glories are ready. 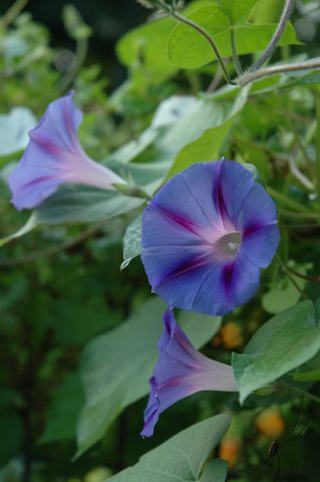 Maybe morning glories inspired all of creation, and then light made the whole outlandish idea possible.  Faced with a void – with a gigantic cow pasture or a wide, gapping gravel ditch, or an equally unpromising backyard – you look out and watch as the dawn overtakes the gloom and think, “There might be morning glories here.”  But then, of course, they’ll need something to clamber up.  So in comes the structure.  And because morning glories don’t bloom until midseason, there should be crocuses followed by pansies and Johnny-jump-ups and peonies and love-lies-bleeding and the entire shebang until the last aster is smitten by frost.  But they’ll need light.  Not everything has the faith of the morning glories.  Take poppies, for example – they need convincing. Promises aren’t sufficient for a poppy.  It requires sunshine.  Dawn has come and gone and you’re well into day before a poppy swells and bares its heart.  Poppies don’t take risks. 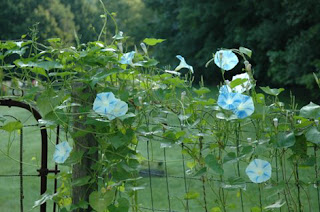 So just when the morning glories are exhausted, the poppies pick up the torch.  And just as the poppies are thinking that the light is getting too low for their liking, well, the four o’clocks are unfurling. The beauty of light, as I see it, is not so much that the phenomenon exists.  No.  The wonder of light is that it moves gradually through the sky.  So everything has its moment in the sunshine, so to speak.
And everything receives some welcome shade.  It’s all so democratic.  The balance of light makes the mullein dart up straight and tall.  Likewise, even when there isn’t a cloud in the sky, every mullein leaf casts shade on the surfaces below as the light moves.  And the shadow time is just as precious as the basking.  You need a respite every once in a while.  You need hostas, astilbes, Solomon’s seal and that sort of thing.  You need a place to wallow and chew blades of grass when the hay baler breaks down.  The shadows are filled with that sort of opportunity.
So the light travels and gathers converts as it goes, working miracles while it moves. Something offstage beckons the pre-dawn morning glories and tells the nicotianas to spew their perfume at dusk. You might imagine that you’re the producer in the garden, and well you might be. But the light is the director, there’s no question about that.
But then, gradually, they fall by the wayside because the light is getting weak in the sky. Because the fireball that orchestrates the whole symphony is winding down.  The roses are shedding petals, the lilies are shattering, the bees are numbed, groggy and drunken. And the gardener is exhausted.  Not least of all, the gardener is exhausted.  The light itself has grown weary, with its shadows stretched long. And you can’t lift the hoe up for one more swing at the cursed witch grass or carry one more weed to the compost.  But you have an excuse.  Because darkness has overcome the day, and it’s gone.  Day is done.
Thank God for night.


For other posts by Tovah, you can click here.
Posted by Juniperhillfarm at 1:35 PM