Pierre-Joseph Redouté (1759-1840), was a Belgian painter and botanist, known for his watercolors of roses, lilies and other flowers at Malmaison. He was nicknamed "The Raphael of flowers". He was an official court artist of Queen Marie Antoinette, and he continued painting through the French Revolution and Reign of Terror. Redouté survived the turbulent political upheaval to gain international recognition for his precise renderings of plants, which remain as fresh in the early 21st century as when first painted. 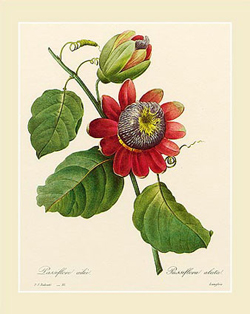 Paris was the cultural and scientific center of Europe during an outstanding period in botanical illustration (1798 – 1837), one noted for the publication of several folio books with colored plates. Enthusiastically, Redouté became an heir to the tradition of the Flemish and Dutch flower painters Brueghel, Ruysch, van Huysum and de Heem. Redouté contributed over 2,100 published plates depicting over 1,800 different species, many never rendered before.

(biographical text on Redoute' from Wikipedia.org)

For more from The Gallery, click here.
Posted by Juniperhillfarm at 1:18 PM

Email ThisBlogThis!Share to TwitterShare to FacebookShare to Pinterest
Labels: Redoute, The Gallery