"I think of hedges as enclosures, and it is with hedges that you may best articulate the bony structure, and skeleton as it were, of a garden."
Russell Page from The Education of A Gardener.


I am a big fan of using hedges to define the architecture of a garden.  I'm not entirely sure why hedges never caught on in American gardens the way they did in Europe.  I suspect part of it has to do with our country's history and our early association with agricultural hedges.  Lumber was always so plentiful in this country that, from the very earliest days, wooden fencing supplanted the more time consuming practice of installing living hedge material to enclose livestock and define property boundaries.  Patchwork landscapes defined by hedges--as you still see across Europe today--rarely existed here. 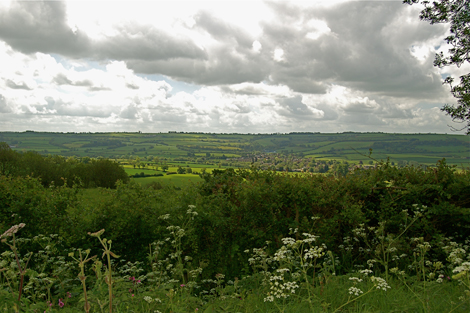 Then, with the growth of suburbia, sprawling lawns soon became the sought after look and it didn't take long for this affection for greenswards to find its way into the garden where an open look was encouraged and any division of the garden into separate "rooms" or areas through the use of hedging fell completely out of vogue. We are still suffering from this 20th-century fashion trend today as is evident in so many suburban American gardens that consist mainly of a few squiggly-shaped beds of plants plopped down in the middle of vast lawns, with little or no architecture holding things together.

Garden hedges can fill a role in the garden that goes beyond simply serving as boundaries, or room dividers, however.  They can become important design elements in their own right, especially if used in a layered composition.  If you google "hedge layering" you will undoubtedly come up with lots of references to "hedge laying," an equally fascinating topic but one that refers to the proper way to "lay" an agricultural hedge which, by the way, is rapidly becoming a disappearing art.  Hedge laying is not what I'm talking about.  Hedge layering is accomplished when multiple hedges are planted at some specified distance apart (this can vary greatly), yet when viewed from a certain perspective in the garden they appear as a single design element. The different hedges can be snuggled right up close to each other or they can be separated by a distance of many feet.  They can be of the same hedging material or consist of different species but they are usually either grown at different heights, or are shaped to accentuate their unique differences.

The legendary garden designer Russell Page understood the concept of hedge layering and used it to great effect in many of his designs.

As did Lawrence Johnston at Hidcote Manor... 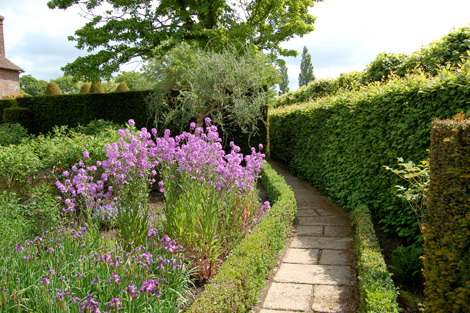 ...and Harold Nicolson and Vita Sackville-West when they laid out Sissinghurst.

Lucky for us all, hedge layering has become fashionable with many modern garden designers. The photo above is a view of plantsman and garden designer Piet Oudolf's showcase private garden and nursery in the Netherlands, where curvaceous layered hedges form a curtain-like backdrop to many of his signature plants in the foreground. But beyond serving as a backdrop, the entire planting of clipped hedges form a powerful feature in this garden; a rigid architecture against which the more free flowing perennials can stand out.  And, when all those perennials succumb to winter cold, the evergreen hedges will continue to carry the garden.

But perhaps the modern masters of the art of using hedges are Belgian designers, Jacques and Peter Wirtz, whose use of curvaceous and layered hedging is often on a grand scale.

In our own garden, we use hedge layering in a much more modest way.  Above is an example of the use of two layered hedges at the end of the pool which are designed to accentuate the shape of the Lutyens bench. Although the curved yew hedge and the taller privet hedge behind seem to be planted right up next to each other, there is a "hallway" of at least ten feet in width between the two of them. 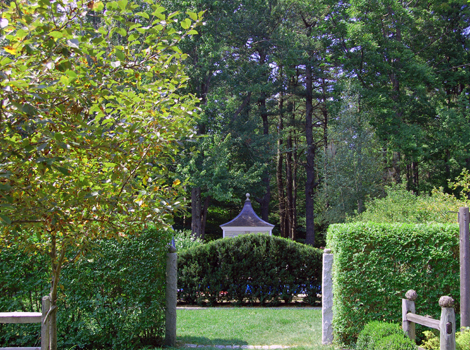 Here is a view of the same two hedges, looking from the opposite direction where the break in the privet hedge also serves as one of the entryways into the garden. 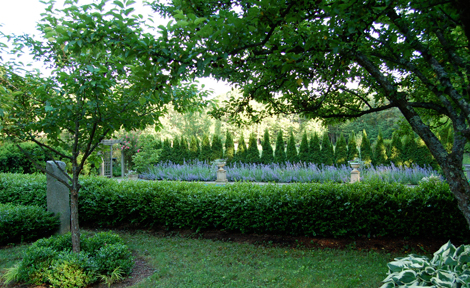 This is another example where we have used the layering effect.  From this perspective in the garden, the low, rounded hedge of 'Winter Gem' boxwood in the foreground, the flowering hedge of Nepeta 'Walker's Low' and the tall spires of the Thuja hedge all work together to disguise the fact that there's a full-sized pool in the middle. Although the spacing between the hedges is considerable, when viewed from a distance across the garden, they look like they are layered right next to each other and appear as a single design element. 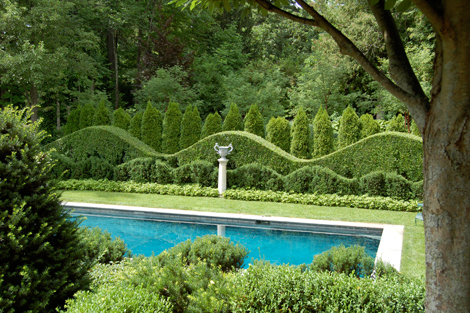 And finally, here's a wonderful example of the layering of four different hedge species in the Peterborough, NH garden of Stan and Cheri Fry.  The undulations of the two clipped hedges suggests a rippling effect which plays perfectly with the adjacent pool.

Posted by Juniperhillfarm at 10:10 AM