There was never a sound beside the wood but one,
And that was my long scythe whispering to the ground.
Robert Frost

Conservation biologists in eastern North America have a huge job on their hands trying to manage two opposing trends in native wildlife.  On the one hand, the populations of animals indigenous to our forests are on the increase while those of the grasslands are rapidly disappearing.  It is an ironic twist of fate for these grassland species since, for at least several centuries, they have had the upper hand. 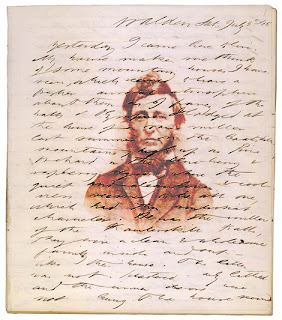 Those of us who have had the experience of having garden or landscape plants nibbled to the bare ground in the middle of the night might find it hard to believe but, in the 1840’s, the sighting of a single deer was news that spread from town to town. Remarkably, the muskrat was one of the largest mammals typically seen during the nineteenth century. It is instructive to read reports of naturalists during this time period.  Henry David Thoreau, for example, speaks of the decimation and loss of species like beaver, deer, fisher, and moose in terms that we would now reserve to describe the extinction of a species.  Yet, he devotes endless pages in his journal to the description of wildlife that are relatively unknown to us in our modern New England landscape.  He refers to the song sparrow many times and describes it as the most common of New England birds. Equally, his descriptions of meadow and field species of birds such as the bobolink, meadowlark, field sparrow, and bluebird fill page after page in his daily journals.  Indeed, he often describes several of these species occurring in dense flocks along fencerows and in thickets at the edges of fields.

Today, rural New Englanders have largely become forest dwellers.  Since the late 1800’s, the regional proportion of forest and agriculture in New England has made a complete shift and wildlife populations have reflected this change.  The deer, and other forest-dwelling mammals and birds like bear, turkey, coyote, beaver, and woodpeckers have made spectacular comebacks.  But, like the sighting of a deer in the 1840’s, today the glimpse of a bobolink or a meadowlark is something that can make news.  Because of the disappearance of grassland fields we are rapidly losing grassland birds, mammals, butterflies, and beneficial insects that were once common in our landscape.

Within our region of New England we are fortunate in that we still maintain some small percentage of open fields to offset the ever encroaching woodland.  In particular, the Monadnock region of New Hampshire has benefited over the years because of the foresight of its residents to preserve and protect its farmlands. However, with the passage of time, these valuable open spaces continue to face a new and different threat.  As hard as it has been in preventing the forest from encroaching on our fields, it is proving even more difficult to curb the tide of development. 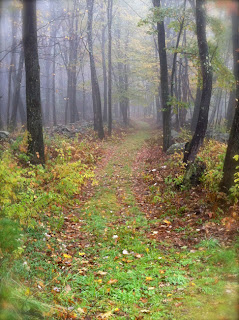 Many of us are fortunate enough to be stewards of both open land and forest.  Over the past several decades, forest management has received a great deal of attention and we have benefited from sound practices applied to both the commercial and recreational use of our forests.  However, similar practices regarding fields are less widespread and the management of these dwindling natural resources can sometimes seem very confusing and complex.  For example, how do we balance the intended use of open space with what’s best for wildlife?

Fields are generally divided into four distinct use categories.  They are usually either pasture, hayfield, cultivated land, or orchard.  All can be successfully managed to increase the diversity of wildlife. 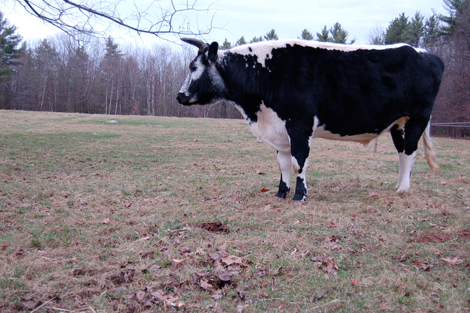 Of the four use categories, pastures often make the worst habitat for wildlife simply because they are usually overgrazed during the summer months, which leads to a loss of plant diversity and density.  However, with rotational grazing practices many small mammals and nesting birds can make good use of pasture land. 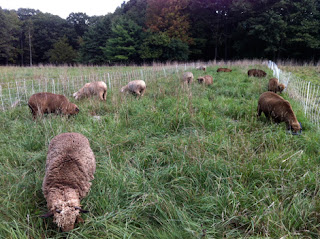 New innovations in portable electric fencing now make rotational grazing much easier and more efficient.  In grazed pasture it is recommended that 40% of the vegetative cover be kept at knee height until after the nesting season ends which, for birds like bobolinks and eastern meadowlarks, is usually August 1.  Alternatively, setting aside an entire section of field as “ungrazed” is a good practice.

Hayfields are often the best habitat for grassland dwelling birds and mammals but are the most difficult to manage for wildlife simply because of the pressures of time and economy. Most of the birds that inhabit our hayfields were native to the tall-grass prairie.  As eastern woodland was cleared for farming, these birds continued to broaden their range eastward adopting the newly created hayfields and meadows as home.  During the early days of farming in the United States, fields of hay were cut by sickle and scythe.  The first practical “mowing machine” was not invented until the mid 1840’s and it was years after that before the machine age of farming reached the small subsistence farms that dotted most of our landscape. The slower pace of mowing by hand created much less disturbance and destruction of grassland dwelling wildlife.  However, as farming practices changed and became more mechanized, many thousands of acres of hayfields disappeared under the plow.  Even on livestock farms, hayfields of mixed grasses gave way to pure stands of alfalfa without any interseeded grasses.  Finally, the development of powerful mowers and conditioners with blades and teeth only inches from the ground ensured that most field-dwelling wildlife ended up as little more than masses of mangled flesh and feathers. 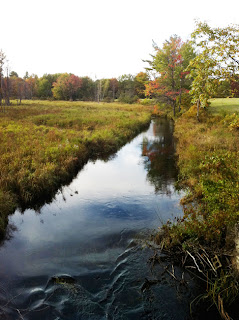 If you are mowing a field primarily for aesthetics you can make it aesthetically more appealing to wildlife by leaving strips of unmowed field that are 30 to 50 feet wide. Only mow these strips every 3-5 years to prevent the establishment of woody growth.  They will provide both cover and food for a variety of birds and mammals.

New Hampshire and Massachusetts Audubon make the following recommendations for the mowing of hayfields:  Avoid mowing areas with ground nesting birds before the first week of August. Now, of course, most farmers will laugh at this suggestion because it makes it just about impossible to get enough hay into the barn to sustain livestock over the long New England winter.  So, if mowing is essential prior to August 1, try to avoid those areas where birds have been seen, or leave small patches or edges unmowed to provide nesting areas.  Leave mowing to every one to three years in fields not harvested for high quality hay. Skipping mowing for a year or so allows for the development of late-blooming wildflowers which will, in turn, increase the numbers of butterflies and beneficial insects.   Leave some patches of bare ground since some species of birds, like killdeer and horned lark, require bare ground for nesting and feeding.  Either divide fields or choose some adjacent fields that are not used for hay production for wildlife habitat.  And, finally, use conservative mowing practices where possible.  These include raising the mower blade to six inches, avoiding night mowing, and using flushing bars on haying equipment to move birds hiding in the grass.

As any farmer or gardener knows, foods grown on cultivated land will, like it or not, provide a source of food for wildlife.  It’s a tricky business, however, picking and choosing your wildlife dinner guests.  Unfortunately, many species you’d rather not invite to dine are the ones that show up.  Turkeys, deer and raccoon almost always crash the party, especially if corn is on the menu.  However, the planting of perennial crops of legumes, clover, alfalfa and sunflowers will encourage songbirds and other species.  It’s all a matter of developing a mindset of sharing. 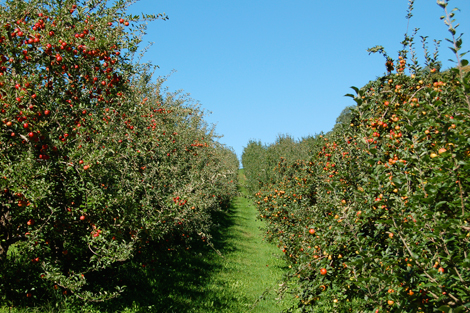 Orchards, with their stands of fruit trees and grasses below provide a wealth of food for a variety of birds and mammals.  Adding a small orchard adjacent to, or as part of, an existing field will dramatically increase the variety of wildlife.  With just a few fruit trees planted for wildlife you can eliminate the spraying of insecticides and fungicides.  And, even in established larger orchards, organic methods or a program of integrated pest management (IPM) will greatly reduce the use of chemicals.

For information on how to prepare a grassland management plan for your own property, contact your local County Extension Office.  For more detailed information on grassland bird and mammal habitat here in New England, visit the web sites of New Hampshire, Massachusetts, Vermont, or Maine Audubon.

And, for more of Thoreau's observations on the 19th-century landscape, check out a copy of my book, Thoreau On Land: Nature's Canvas, with a forward by Bill Mckibben.

Posted by Juniperhillfarm at 5:17 PM