Let's face it, the Red Pine (Pinus resinosa) is not a glamorous tree. Its most notable characteristic is that it grows fast and straight and tall.  If you recently made a trip to the nursery looking for a tree to plant in your garden or front yard, chances are you didn't come home with a red pine; even if you could have found a red pine at the nursery.  Yet, most of the red pines in this part of New England didn't arrive here through the chancy process of seed dispersion.  They were actually planted.

In 1930, America was in the midst of a great depression and when Franklin D. Roosevelt was elected in 1932, one of the first things he did as part of his New Deal was to establish the Civilian Conservation Corps (CCC).  The CCC was designed to provide work for unemployed young men between the ages of 18 and 26 whose families were on relief.  In return, CCC enrollees applied all their young muscle and determination to the rebuilding of the nation's rapidly declining infrastructure and did what they could to restore some of the country's depleted natural resources (does a troubling economy, a crumbling infrastructure, and a job plan to aid in the recovery sound in any way familiar?).

The Civilian Conservation Corps quickly became known as Roosevelt's Tree Army because in a period between 1933 and 1942 it is estimated that they planted three billion trees!  One of the major programs of the CCC was to renew decimated forests across the country in an effort to battle erosion.

In New Hampshire and Vermont alone, an estimated 62,000 men worked here as part of the Civilian Conservation Corps and they planted hundreds of thousands of red pine seedlings that eventually grew into the mature red pines we see in the region today. Although most of the red pines that were planted by the CCC were targeted for government owned land, the government further subsidized the planting of red pine seedlings throughout the twentieth century in an effort to provide New England hill farmers with a cash crop that they could grow on their depleted and worn-out pasture land.  The red pine was chosen because it grows fast (about a foot per year) and is relatively immune to diseases that affect many other pines.  It also grows very straight and, among other uses, over the years it found a niche as a chosen softwood species for utility and telephone poles.

The Civilian Conservation Corps wasn't the first to do mass plantings of Pinus resinosa, however.  In 1851, Henry David Thoreau spotted the first red pine he ever saw growing in Concord and just three years later was amazed to discover several red pine plantations on the island of Nantucket. In December of 1854, on a sojurn to the island, Thoreau was staying with Captain Edward Gardiner, who told him that he had several large tracts of land on the island where he was growing red pines.  As Thoreau recounted..."he showed me several lots of his, of different ages,-- one tract of three hundred acres sown in rows with a planter, where the young trees, two years old, were just beginning to green the ground."  After seeing Gardiner's plantations, Thoreau surmised that the red pine might very soon change the entire aspect of the treeless island.

Ecologists tell us that the consistent morphology and lack of genetic variation found in Pinus resinosa indicate that the tree must have come very close to extinction at some point in its recent evolution.  In nature, red pines prefer to grow in sandy soil and stands of red pine only become established following fire.  Red pine seedlings need sun to thrive and thus are incapable of flourishing under a mature tree canopy. 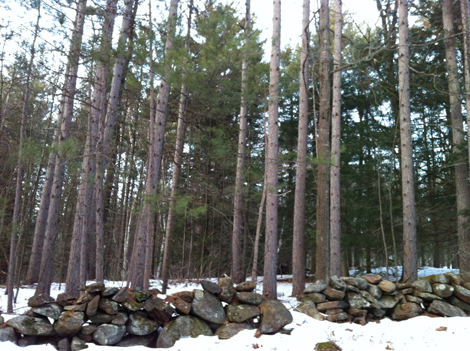 It's easy to spot a red pine plantation like those planted by the Civilian Conservation Corps.  Like all monocultures, they are geometric and stiff, devoid of the natural layering or, as Thoreau put it, the "perfect renovation" that the forest attains in its later stages of developent.  We have two remnants of red pine plantations that were planted on old pasture land here at Juniper Hill and every time I come upon them on a woodland walk, I feel as though I've just entered a forest environment artificially constructed by the heavy hand of man.

Nevertheless, even though some people like myself find red pine plantations jarring and unnatural, and the red pine will probably never be crowned a winner in any woodland beauty contest, it's a tree that provided many young and desperate men of the 1930's with a sense of purpose during one of the darkest periods in our nation's history. And in that, there lies a great beauty.

Posted by Juniperhillfarm at 12:57 PM