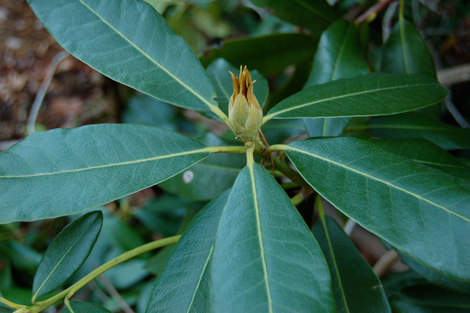 On cold winter mornings, I don't have to consult a thermometer to tell me what the outside temperature is and whether or not I need to put on an extra layer of clothing.  All I need to do is take a look at the rhododendrons that are right outside our bedroom window. 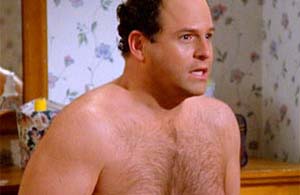 I'm certainly not the first gardener to notice that the leaves of rhododendrons change shape depending on how cold it is.  When the thermometer starts to dip, the leaves begin to curl up like little green cigars. And how tightly they're curled seems to depend on how cold it is. But they don't just curl up, they also droop. Every time I witness this phenomenon I'm reminded of the Seinfeld episode where Jerry, George and Elaine talk about cold temperatures and the scientific principle of shrinkage. But that's an entirely different story.

I became curious about what it is exactly that makes rhododendron leaves curl up and droop in the face of cold weather, looking like little evergreen Chinese finger puzzles, and so I did a little research.  Here's what I found:

Charles--don't judge him by the size of his forehead--Darwin was the first to point out that the movement, or alteration in shape, of plant leaves could occur in response to a number of extrinsic factors including their sensitivity to temperature (thermotropic movement).  However, in most plants, thermotropic movement usually occurs in response to hot and dry environments where leaves change shape in order to avoid excessive light absorption.  The curling and drooping response of rhododendron leaves to cold temperatures is rather unusual. 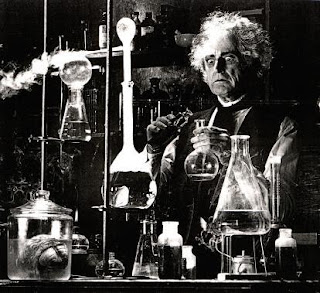 For more than 200 years, plant explorers, botanists, and physiological ecologists have been scratching their tousled heads, theorizing about leaf curling in rhododendrons.  Some have suggested that it's an evolutionary phenomenon we are witnessing; that leaf movement in rhododendrons evolved in response to climatic conditions in our past and actually has no adaptive significance in today's very different environment.  Others have suggested that the leaves curl and droop in order to protect themselves from the mechanical damage that can occur when ice and snow build up on the leaf surface.  Still others theorize that leaf movement is a mechanism that prevents desiccation during cold, dry periods. Then there are the heat-balance theorists who say that the curling and drooping of the leaves reduces exposure to the sky and is thus a way for the plant to regulate leaf temperature.  There's also the photoinhibition theory which postulates that drooping and curling protects the leaves from photosynthetic damage during cold weather when leaf cell membranes are more susceptible to injury from intense radiation.  And, finally, there's the freezing damage theory that says that leaf curling reduces the leaf area exposed to light and thus slows the rate of thawing which protects the leaf from freeze damage. 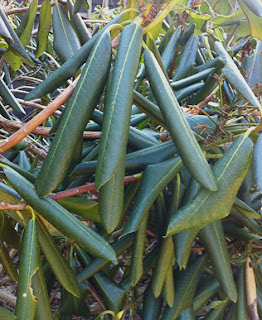 Now, as a way of building up a little more suspense in this torturous tale, I could easily drone on and on about how each one of these theories has been either supported or refuted by the evidence.  However, at the risk of giving the story way more space than it actually deserves, I will show all of you readers who have stuck with me up to this point how merciful I really am by simply saying that ...[drum roll, please]... current research suggests that leaf curling and leaf drooping in rhododendrons are two totally distinct behaviors in the plant that have two very different purposes and possibly different adaptive significances. Whew!  If that doesn't sound scientific, I don't know what does.

It appears that thermotropic leaf curling is a specific response to leaf temperature and serves to prevent damage to the leaf's cellular membranes during the processes of winter freezing and re-thawing.  Leaf drooping, on the other hand, most likely serves to protect cell membranes from damage due to radiation during cold temperatures when they are at most risk; and the amount of droop, or leaf angle, is controlled by a combination of water availability from the soil and atmosphere, as well as air temperature.

So, there you have it.  Curling most likely prevents damage from freezing and drooping prevents damage from radiation.  Of course, as in all scientific discourse, you'll notice that I peppered almost every sentence with phrasing like..."it appears that"...and "it is most likely"...and "current research suggests."  So, don't even think about suing me if tomorrow night on the evening news you hear Brian Williams say..."new research indicates that the drooping and curling you see in your rhododendron leaves are actually caused by all that hydrofracting they're doing in Pennsylvania and New York."

Now that I've looked into this leaf curling thing in rhododendrons a little more and have satisfied my curiosity, I'm not exactly sure how I will apply my new discoveries to my daily life.  I think I will just continue to stick to my current routine when I arise on cold winter mornings.  That is, take a look at the rhododendrons outside the bedroom window and then dress accordingly.  Here are my rules, based on the conditions:

Condition 1. Rhododendron leaves flat out and facing the sun, with no droop = shorts and sandals.

Condition 2. Leaves moderately curled, with a 45 degree droop = layer of Tech Wick underneath everything and a wool hat.

Condition 3. Leaves curled tighter than a cigarette and pointed directly at the ground = stay inside by the woodstove, curled up in a comfortable chair with a good book and a glass of wine.  Hey, I'm no idiot... I can curl up, too!  After all, I have my own membranes to protect!

Posted by Juniperhillfarm at 2:24 PM