I go positively gaga over barns.  I love them.  And, the older the better.  When the freezing cold of winter seizes up almost everything in these north woods and there's not a whiff of herbal fragrance in the air to remind me of summer pleasures, I go into the barn where the smell of hay still lingers.  Our big red barn has been around for almost 200 years and during that time the earthy aroma of livestock and herbage has seeped into just about every pore of the old beams, rafters and floorboards. And I love it there.

We actually have two barns here at Juniper Hill but the oldest, and smaller of the two, was turned into living space long before we arrived.  When we recently remodeled the kitchen, which now makes up one end of the smaller barn, we tore up the floor and underneath it found, in one corner, the most beautifully hand-crafted stone well that still contained water some twenty-feet below its surface.  I believe this was the first well dug on the property, dating from the late 1700's, as it was positioned just outside what would have been the back door to the original gambrel house.  When the small barn was constructed sometime after the house was built in 1789, it was connected to the house and the well was then simply incorporated into the interior of the barn and used as a source of water for the animals, while a new "drinking well" was dug elsewhere on the property.  This incorporation of a water source for livestock right inside the barn was apparently a common practice in New England as connecting outbuildings were added to primary dwellings and new wells were dug.

Around 1830, as the farm grew, our big red barn was built which was then connected to the older but smaller barn by the addition of two carriage sheds.  The big barn was used primarily for storing hay but it also accommodated livestock. All of the original pens, hay-holes, and troughs used for the winter quartering of animals are still in place.  This entire design--often referred to as the big-house, little-house, back-house, barn style-- was repeated over and over across New England as farmers did everything they could to keep themselves under roof and avoid having to wade through deep snow in the winter in order to complete their chores.  And I thank them every winter day for sticking to their architectural guns!

The evolution of the barn in America would make for an interesting interdisciplinary study in architecture, agricultural practice and local culture and could probably keep a Ph.D. candidate busy for a couple of years, if you could find one these days that was interested.  Early settlers in America who were eager to escape the tyranny of one overlord or the other wanted nothing to do with structures that resembled the old tithe barns of Europe, where at least ten-percent of their hard-won harvest would end up.  After all, one of the reasons they fled to America was to escape taxation (and you know how that worked out).  So, they rejected many of the architectural elements of those ancient structures, like the large "cruck," or curved brace, and the long roof which rested its entire weight on uprights within the barn.  Many of the old tithe barns were extensions of Abbeys and held "contributions" destined for the church, and the construction of the interiors of those old barns was very church-like.


In America, most barns were first built by the craftsmen farmers themselves with help from their communities, rather than by a specialized labor force of housewrights or carpenters.  And so, vernacular styles began to develop that were dictated mostly by the types of building materials that were available, the climate, and the kinds of crops that the farmer needed to protect from the weather.  There were the stone, banked barns of Pennsylvania, the log barns of the southern mountains, the English type and connecting New England barns, the Dutch gambrel-roofed barns of New York, the round barns of the Shakers, and the tobacco barns of Connecticut and the southern states.  And then there were corn barns, sugar houses, corn cribs, smoke houses, forge barns, sheep barns, cider houses, wagon sheds, ice houses, wash houses, summer kitchens, hop barns and oast, milk, and pig houses.

In 1830, when our big red barn was built, farmers made up about 75% of the labor force compared to about 2% today.  And, if you didn't identify yourself as a farmer in those early days--even if you were a doctor, lawyer, or village idiot, you still farmed. Quite simply, it was the only way to sustain yourself.  So, there were barns and outbuildings everywhere, of all shapes and sizes.

Sadly, today the old barns around the country are crumbling before our eyes. Most of the outbuildings have already disappeared.  The rapid decrease in the number of farms, the availability of more "modern" building materials, and the cost of upkeep and maintenance of the old wooden structures have all contributed to their decline. Luckily, some states like New Hampshire have recognized that many old barns and farm buildings are important scenic landmarks that help tell the story of our nation's agricultural heritage and they have thus instituted tax incentives that encourage the preservation of these buildings.  If you're the owner of one of these treasures and you get as ga-floofy as I do over them, you can click here for more information on the New Hampshire program.


The barn was usually the first structure that was erected when a family moved to a new land.  The timbers and materials used were almost always better than those used in the house.  From the roof--the most important element--to the threshing floor used for the preparation of grains, to the sidebays, used for the winter storage of hay and livestock, the barn served as the architectural link to a family's survival. It seems almost impossible to think that, with the passing of just a couple hundred years, these old sanctuaries of life now represent little more than a curious collection of wood and stone in the lives of most people.

Further Reading: (click on book's image for more info or to order) 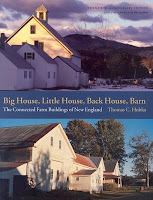 Endersby, E., Greenwood, A., and Larkin, D.  Barn: The Art of a Working Building. 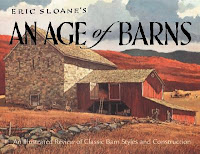 Sloane, Eric  An Age of Barns.
Posted by Juniperhillfarm at 11:26 AM