Who Are These People and Why Are They In My Garden? 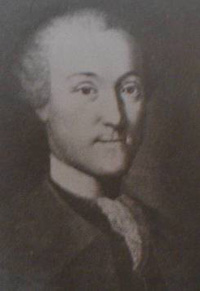 Johann Gottfried Zinn (1727–1759) was a German anatomist and botanist and a member of the Berlin Academy.

Considering his short life span, Zinn made a great contribution to the study of anatomy. In his book Descriptio Anatomica Oculi Humani, he provided the first detailed and comprehensive anatomy of the human eye.

In addition to his medical career, Zinn was also an ardent botanist. Perhaps because of his interest in the human eye, in 1750, the German Ambassador to Mexico sent Zinn some seeds of mal de ojos, which was considered a weed in Mexico.  The plant (Kalanchoe daigremontiana), also known as Mother of Thousands, is used in many cultures as an ingredient in a potion to "ward off the evil eye" (mal de ojo).

In 1753 Johann Gottfried Zinn became director of the Botanic garden of the University of Göttingen, and in 1755, professor in the medical faculty.  In 1757 Zinn described the orchid genus Epipactis that belongs to the family Orchidaceae.

It was Botanist Carolus Linnaeus who designated a genus of flowers in the family Asteraceae, native to Mexico, as Zinnia in his honor.

There are around 20 species of zinnias occurring in the wild.  Most are annuals but there are a few that are perennials and shrubs.  To learn more about some of the most popular zinnias today, see Fergus Garrett's recent article on Zinnias in the September, 2011 edition of Gardens Illustrated as well as Tovah Martin's post on zinnias at her blog, Plantswise, by clicking here.

Information on Johann Zinn from wikipedia.org.

Posted by Juniperhillfarm at 10:25 AM