Out With The Veggies and In With The Ornamentals 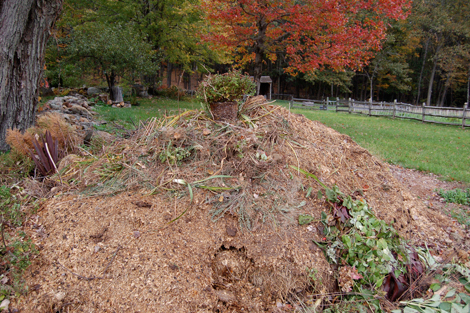 It's that time of year again when we are emptying containers around the garden. Some of the container plants are way past their prime and will look better sitting on top of the compost pile than they're looking right now in their pots.  Others, however, are still looking pretty spiffy and it's a major decision whether to disassemble them, wanting to hang on just a while longer to any little bit of summer flower color in this season dominated by halloween orange.  Still, I know that if I don't take care of this chore right now, I'll be running up against the changing seasons (which can happen in the blink of an eye here) and I'll be stuck out there in the wind and cold trying to extract a bunch of half-frozen plants from a bunch of half-cracked pots with chilled, half-numb fingers.


In trying to manage what, in our case, has become a rather extreme case of pot-o-philia we have had to learn to be resourceful in our use of garden space.  One of the areas of the garden that does double duty for us is the potager. During the height of summer it, of course, serves its main function of housing most of the food that we grow.  But, right now, all but a few of the raised beds in the potager are sitting vacant. If we haven't harvested pretty much what we need from them by now, well... it's getting a little late.  The only beds that are still reserved for produce are a few in which we will plant next season's crop of garlic (one of my last official poatger chores for the year, and one I usually do with cold, half-numb fingers, by the way). 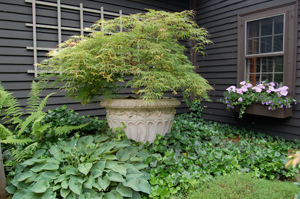 So, we use quite a few of those vacant raised veggie beds, with all that rich, loose, easy-to-dig-in soil, to heel in many of the perennial plants that we've removed from their containers but plan to use again next year.  We have had great success with this method and, with a little covering of salt-marsh hay to help, everything usually survives these harsh New Hampshire winters very nicely.  To our surprise, we have been especially successful with wintering over many of the Japanese Maples that we display around the garden in containers.  Some have been popped in and out of pots and their winter home in the potager for many years now. We dig them up in the Spring, before they leaf out and then, to keep them at a manageable size, do a little bonsai root trimming on them before we repot them in new soil and potting mix.  A nice use of vacant garden real estate!

Posted by Juniperhillfarm at 9:26 PM