During the gardening season, I try to visit as many gardens as time allows; there is no better way to learn about plantsmanship and garden design. And, if I see a particular plant or good design idea that strikes my fancy, I am not ashamed to say that I will often "borrow" it directly or translate it somehow to fit our own gardens. If there was such a thing as "garden plagiarism" then, I admit, I could possibly find myself in a little trouble. On the other hand, it was the English author Charles Caleb Colton (1780-1832) who first said "imitation is the sincerest form of flattery" and since at one point in his lifetime Colton was the vicar of Kew (the location of the Royal Botanic Gardens), I'm assuming he knew a little something about gardening and thus also had the realm of horticulture in mind when he came up with that little ditty. That kind of reasoning probably wouldn't hold up in a court of law, defending against a suit of garden plagiarism, but it's good enough for a gardening blog. 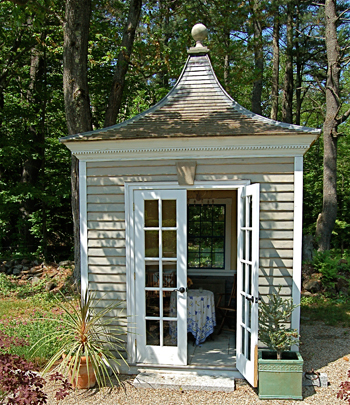 Here is an example of an idea that I borrowed practically whole hog.  It's our New England translation of one of the garden pavilions at Hidcote, the world famous garden in Gloucestershire, England.  Instead of brick and stone tile, it's done in clapboards and cedar shakes, the building material of choice for our part of New England, but the dimensions and roof lines are very similar. 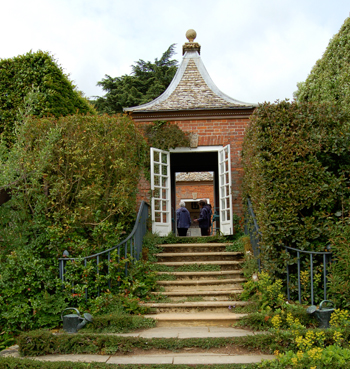 And, here is a shot of the original pavillion at Hidcote.  After just visiting Hidcote, I was thrilled to see that we got the overall size and the slope of the roof just about right. However, it's a shame I didn't have the skills to "borrow" the stone steps and iron railings, as well! 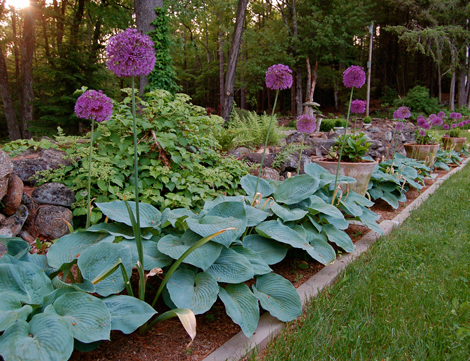 And here is my interpretation of a planting scheme borrowed from a visit to the garden of interior decorator Bunny Williams, in Connecticut.  It's a simple border of Hosta sieboldiana 'elegans' underplanted with Allium 'globemaster.'  The idea here is to have the blue hostas grow to a size that completely covers the yellow and tatty looking foliage that's inevitable when the alliums set their wonderful purple flower heads.  Ours is a new planting and the hostas are not quite large enough yet to do that job completely.  We have this simple border planted along a stone wall, opposite to a long line of old rhododendrons, at the west entrance to the garden. On top of the stone wall and also climbing a tree, we have planted two Hydrangea petiolaris.  Set within the hostas, we have placed three large clay pots from Campo de Fiore that contain plantings of our favorite Hydrangea macrophylla 'purple majesty,' that will bloom later and thus continue the purple and blue theme begun by the hosta-allium combination.  Below is a photo of a 'purple majesty' in full bloom just after we put in the hostas at the end of last season.  Note how much the hostas have grown in one year. 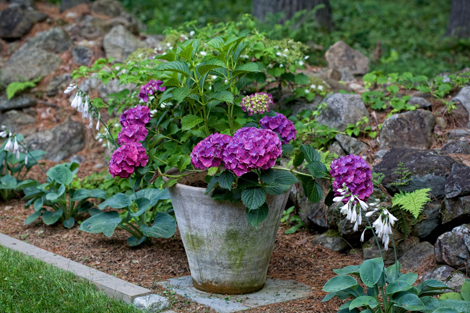 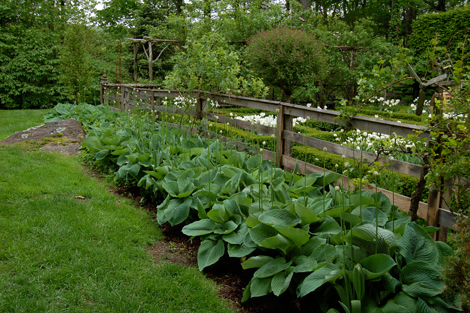 Above is the original planting I saw at the gardens of Bunny Williams.  Her hostas and alliums are planted along a rustic wooden fence that borders a beautiful parterre edged in boxwood and planted out with mostly white plants (you'll see more of this garden in future blog posts).  This photo was taken in mid-May before the alliums bloomed but note that the hostas have grown to a size that you don't see any allium foliage at all. 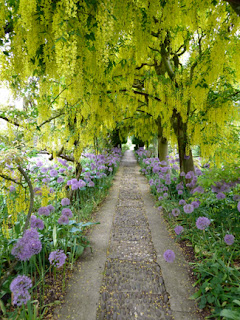 The hosta-allium combination is not a new one and, indeed, is quite the rage right now.  Who knows exactly where this planting scheme originated.  Perhaps it was an extension of Rosemary Verey's very famous "laburnum walk" at Barnsley House (shown at left), with the hostas being added as a way to mask the yellowing foliage of the alliums. Whatever its origin, the idea is certainly being passed around and re-interpreted and, like so many other "borrowed" aspects of gardening, almost always represents a most sincere form of flattery.
Posted by Juniperhillfarm at 9:13 AM