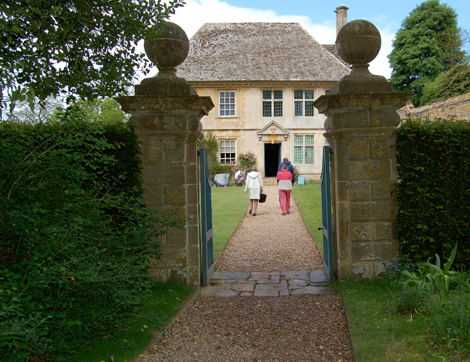 I suppose that because, from time to time, I have been accused of being one myself, I seem to have a particular affinity for eccentrics.  And if an eccentric also gardens, so much the better. Therefore it only seems proper that I should begin the series on recently visited English gardens with one that was created by a true English eccentric.

Charles Paget Wade was an architect, artist-craftsman, and poet who created a wonderful garden around his home, Snowshill Manor, located in the village of Snowshill, Gloucestershire, just about 10 miles from the famous garden at Hidcote.
The best descriptors I can think of to characterize the gardens and manor house at Snowshill are "ancient, settled, and quirky."  The house, built in the sixteenth century of local mellowed Cotswold stone, is perched high and looks out over the beautiful, rolling Cotswold hills.  From 1539 to the early 20th century, the manor house was occupied by a number of different owners.  It was purchased by Charles Wade in 1919 with money he inherited as heir to his family fortune, which was made largely from the sugar trade in the West Indies.
The gardens were laid out by Wade, in collaboration with the arts and crafts movement architect, M.H. Baillie Scott, between 1920 and 1923. They contain a few water features but are mainly designed as a series of terraces where plantings are shown off against walls, walkways, and outbuildings made of ancient stone. 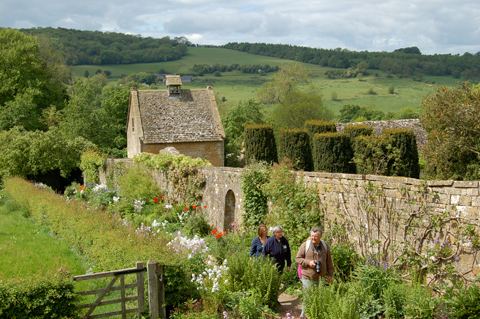 To say that Charles Wade was a collector of artifacts would be a dramatic understatement.  He was a fanatic about the arts and crafts movement and whenever possible during his travels would acquire any item he could lay his hands on that, for him, defined well conceived hand craftsmanship.  He eventually amassed a collection of over 22,000 items that occupy room after room and range from bicycles to toys, to clocks, to Japanese samurai armor.  Charles Wade had to be the inspiration for George Carlin's comedy routine about "stuff."  This guy acquired so much "stuff" that there was no longer any more room left in the huge manor house for he and his wife to live.  To accommodate his growing collection, Wade and his wife were eventually forced to take up residence in the Priest's House next door where they lived like humble servants in quarters about the size of a large closet (they don't make wives like that any more, by the way).  Today, in addition to viewing the gardens, visitors to Snowshill can tour the manor house to see this huge collection of handcrafted items and also take a peek inside the Priest's House where you can shake your head in amazement at Wade's chosen lifestyle but at the same time celebrate the eccentricity of the whole arrangement.
For more images from Snowshill Manor, CLICK HERE.

Posted by Juniperhillfarm at 8:29 AM