When I buy a new plant from the nursery, I always wonder what might be in store for it in the future; will I do something stupid that shortens its lifespan or, perhaps, will it be enveloped and displaced by native plants once this garden is given back to Mother Nature?  Plants that endure through the ages are rare and when they last for centuries, they are celebrated.

One such celebrated plant is The Great Vine, at Hampton Court Palace Gardens.  This 'Black Hombourg' grape was planted by the famous Lancelot 'Capability' Brown  in 1768 when he was surveyor to King George III, and it continues to produce an annual crop.  Brown began his professional career as the head gardener to Lord Cobham (1669-1749) at Stowe, in Buckinghamshire, and eventually became the most famous landscape designer of the eighteenth century.


The Great Vine was originally planted with its roots outside, but with its branches trained inside a glass house.  The girth of the trunk has continued to expand over the years; at the beginning of the nineteenth century, it measured about a foot in diameter and by the end of the century measured about four feet.  Today, the girth of the trunk measures a whopping 12 feet around the base.


The vine was first shown to the public in the 1840's when Queen Victoria opened the Palace Gardens to the public.  Today's yield from the vine averages about 600 pounds of black, sweet grapes that can be purchased by visitors to the garden in late summer and early autumn.


Another celebrated plant is the Ginkgo biloba (Maidenhair tree) which was planted at The Royal Botanic Gardens at Kew by a largely forgotten gardener, James Gordon (1708-80), around 1762. Gordon, a Scot, began his career as a head gardener to Lord Petre at Thorndon Hall, in Essex, and later established a very successful nursery in London.  He is credited with introducing the Ginkgo biloba to Britain, around 1754 and the specimen he gave to Kew is now listed among the 50 "Great British Trees."  Ginkgo bilobas represent a connection to our past that goes back well beyond the 1700's when Gordon brought the tree to Britain. Ginkgos are the only surviving members of a group of plants that co-existed with the dinosaurs, 180-200 million years ago and have only survived extinction through cultivation. 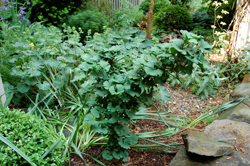 Although this little dwarf Ginkgo biloba that I planted last year will never get more than about four feet tall, I wish it a long and celebrated life!

Posted by Juniperhillfarm at 11:00 AM

Email ThisBlogThis!Share to TwitterShare to FacebookShare to Pinterest
Labels: Plants