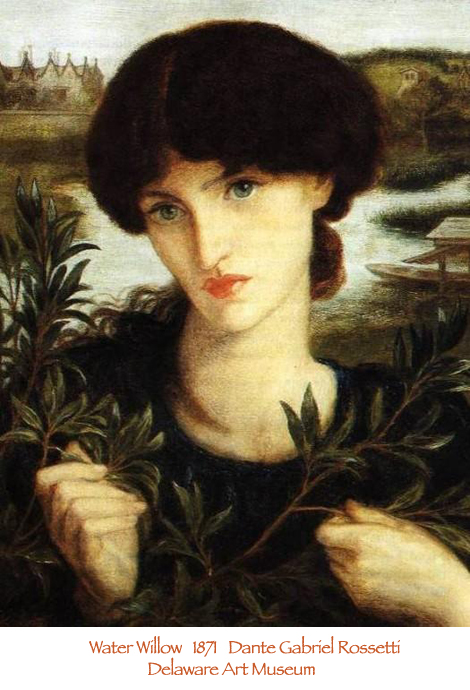 Dante Gabriel Rossetti was an English poet and artist who was one of the founders of the Pre-Raphaelite Brotherhood in 1848.  His work is said to be a major precursor to the Aesthetic movement which became prominent in Europe during the 19th century.  Rossetti's paintings were characterized by their sensuality and medieval revivalism.

Rossetti painted Water Willow in 1871.  The woman in the painting is Jane Morris, wife of William Morris, the founder of the Arts and Crafts movement. Although William Morris is most often associated with elements of interior design, his artistic vision extended to the exterior of buildings and their surroundings where he developed his own principles of garden design. He was a fierce advocate for the use of simple, native plants and his ideas greatly influenced other important partners in the Arts and Crafts movement such as Gertrude Jekyll and Edwin Lutyens.  Morris loved water and often used willow and the plants surrounding marshes and streams as motifs in his designs of wallpapers, textiles, and wood carvings.  It is perhaps ironic that his wife is clutching willow sprigs in this portrait.  It was painted at the height of a long passionate love affair she was having with the artist, Rossetti, who was a close friend of her husband.  Jane Morris would appear as a model in several of Rossetti's paintings.  Visible in the background of this painting are the Thames River, the Morris boathouse, and the gabled roofs of Kelmscott Manor, the Cotswold home of William Morris which is now visited by thousands of tourists each year. 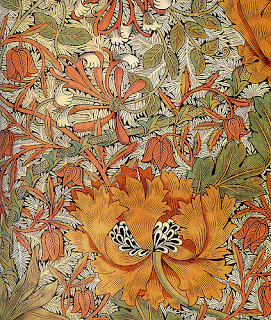 For an excellent resource on the way native plants influenced the designs of William Morris, see The Gardens of William Morris.  In this Morris wallpaper design at right, titled Honeysuckle, which was printed in 1876, Taxus (yew) forms the background for one of his most popular designs.  According to May Morris, in her biography of her father, ...honeysuckle will seem to be the most Morrisian in character of all his pattern-making in mid-life.  The crown imperial with its graceful top-knot, the great poppy whose leaves form an inner net, the honeysuckle, the fritillaries, the background of yew twigs, all these elements, looking as if they were copied straight from the garden, are brought together in a decoration for wall or window unique in the history of design past or present.

To see more from The Gallery, click here.
Posted by Juniperhillfarm at 12:08 PM