Keeping Up With The Pace Of Technology: QR Codes 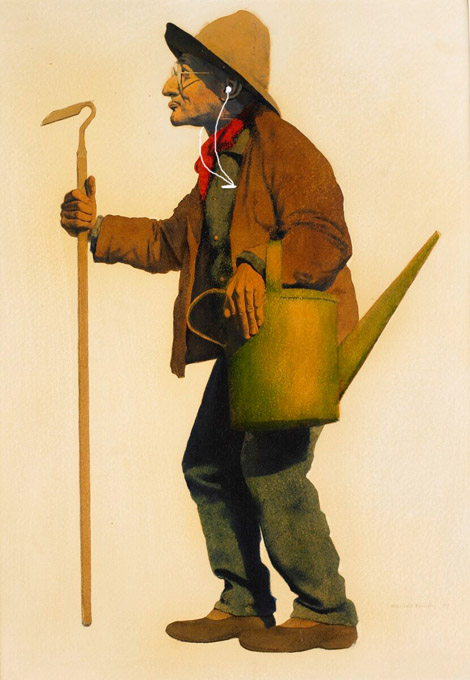 One of the things I like best about gardening is that it provides an escape from all the high-tech electronic buzz that usually fills my head during the day.  Between emails, text messages and what seems like constant googling, it's all too easy for me to fritter away my entire day tied to one electronic device or another.  Once I'm in the garden it doesn't take long before I undergo a real digital purgation, where my head is emptied of all those bits and bytes.  There isn't anything virtual about the garden.  Out there, an electronic reminder usually means I've weeded a little too close to the electric fence (ouch!) and a tweet means that there's a real bird following me around and not someone on Twitter. Isn't reality wonderful?

However, as much as I like to keep the two worlds of horticulture and technology separate and distinct for reasons related to my own sanity, there are a few cases where I permit them to intersect. This is chiefly because I'm lazy and always looking for ways to make my gardening life a little easier.  For example, not long ago I wrote about how my IPhone became one of my favorite new tools once I found out what it could do for me in the garden.  And now, there are QR codes which are not only very cool and appeal to the nerdy side of me, but also seem like they could have great potential in the world of gardening.

QR (Quick Response) codes are those little square images that are becoming more and more prevalent in magazine ads, in store windows, on business cards, etc.  You can think of a QR code in the same way you think of a bar-code, except bar-codes are tied to specific products whereas QR codes are tied to particular locations on the world-wide-web.  For example, at left is the QR code for the Notes From Juniper Hill blog that you're reading right now.

All you need to scan and read a QR code is a smart phone with a QR/Barcode reader app installed.  There are literally hundreds of these apps to choose from, many of them free.  The free one that I like and have installed on my IPhone is Red Laser.  If you don't have one installed on your smart phone yet, go ahead and check into your App Store and install one now.  Then give it a try on this QR code to the right which, as you'll see, will immediately take your smart phone to Tovah Martin's Plantswise Blog.

At this point you're probably saying..."well, that's pretty cool but how does it relate to gardening?"  Well, for one thing, many nurseries are beginning to place QR codes on their plant tags, as in this example at left from Proven Winners.  So, when you're shopping at your favorite local nursery and you want detailed information about a plant other than the standard stuff, like sun exposure, hardiness zone, etc., you can pull out your smart phone, scan the QR code, and get a wealth of information (even videos) about the plant before you mistakenly bring it home and then find out that there are only two people on the entire east coast who have been successful growing the bloody thing.  You can click on the image at left to see the kind of information that Proven Winners ties to their QR codes, including combos that go with the specific plant, growing tips, plant features and awards.

The nurseries also benefit from having QR codes on their plant tags because the codes are usually tied to their own websites and plant databases where they want their customers to be.  Also, because the new smart phones have GPS and location services, it's now possible for nurseries to generate QR codes with location tracking.  That is, nurseries can not only see when the code on a plant tag was scanned but they can also see what device was used to scan the code and where the person was when the code was scanned.  This not only gives them valuable marketing data about which of their plants are on the customer's radar but also allows them to determine where their plants are ending up.  Can you spell J-E-T-S-O-N-S?

This seems like a good spot to go on a little rant about a problem I see far too often with some suppliers:  There can be a downside to the customer when plant tags containing QR codes aren't used as they were intended.  For example, it makes no sense for nurseries and plant suppliers to add a QR code that simply points to their company website or literature that has nothing to do with the product.  That's a QR code that simply points to frustration.  The QR code must point to information that has real value to the customer. 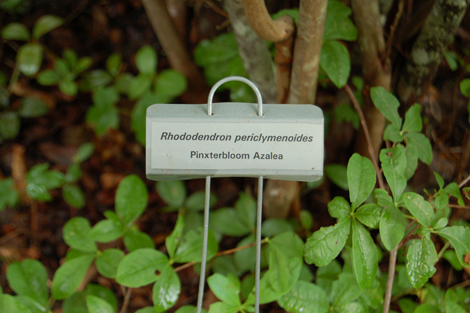 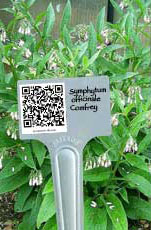 In addition to their applicability to nurseries, it's fairly easy to imagine QR codes making their way into large public or private gardens where plant labeling is used as an educational tool.  How many times have you visited a botanical garden, walked by a plant that you had never seen before, and wished you knew more about it beyond its botanical name written on a zinc label?  Now, it's possible to scan a QR code on the plant label and have more information than you need in an instant. And, you don't have to annoy the rest of the visitors in your crowd by standing in front of plants all day reading your smart phone.  Most of these QR scanners, like Red Laser, keep a record of your scans, so you can read them at a later time.  There are a number of manufacturers who now make QR code plant tags and back them up with their own plant databases.  And, for those gardens who supply plant lists for visitors, rather than labeling their plants, QR codes can be incorporated into those as well.

But wait!... as they yell in the TV ads...QR codes get even cooler because it's easy to make your own.  For example, here is a QR code I just made for my Stewartia pseudocamelia that I then tied to the University of Connecticut's plant database which provides a full profile for this wonderful tree.  Go ahead, try scanning it.

Because QR codes are treated just like any other image, you can print your QR codes, use them on a business card, put them on a coffee mug or even on a T-shirt if you'd like.  Or, in the case of my Stewartia pseudocamelia, I can put the QR code on a plant tag and stick it in front of the tree so that when the next person who walks through the garden asks me..."what's that tree?"--I can say..."do you have a smartphone?"  You get the point.  If you're a gardener who already uses plant tags in your garden, you're in for some fun.

Here's a quick and easy way to make your own QR codes:
1.  Copy the URL you'd like your QR code to point to.

2.  Go to the Google URL shortener.

3.  Paste the long URL that you just copied in the space provided, then click on "shorten URL."

4.  Once you get your shortened URL, click on "Details."  In the upper right of the screen, you'll see your QR code for that URL.

5.  You can then right click and save this image so you can print it or use it wherever you'd like.

For further reference, see this article on QR codes by Sally Benson from American Nurseryman.

Posted by Juniperhillfarm at 12:35 PM