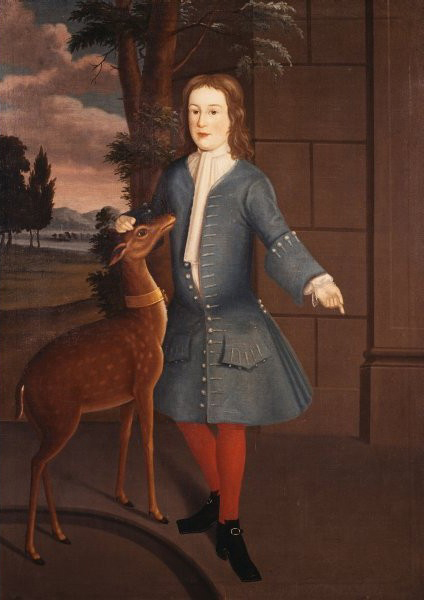 It's that time of year--when the grass has grown its last inch--to think about making the garden exclusive once again.  I hate doing it.  It goes against the grain. It's contrary to the very concept of openness and how a garden should be inclusive and welcoming.  I always feel constrained, even a little imprisoned, afterward. However, the flora here will soon become too tempting for the fauna (no pun intended), and so I can't put it off any longer.  It's time to erect the Bambi Barricade. 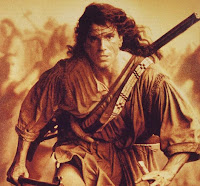 It wasn't that long ago when people were erecting fences to keep deer in, not out.  In colonial British America, deer parks became quite the thing since deer were both a source of venison and buckskin, and they were a lot easier to catch if they were in a confined area than if you had to chase them through the thick forest. Remember Daniel Day Lewis chasing that deer through the woods in the Last of The Mohicans? You had to be fit.  As most women who saw that film are usually quick to point out to us men... Daniel Day Lewis was in pretty good shape.  When our house here at Juniper Hill was being built, George Washington already had a deer park at Mount Vernon and there were more scattered around New England, such as the one at the Lyman Estate in Waltham, Massachussets. During this time, when the sheer quantity of natural resources here in the colonies was spinning heads among the British ruling class, it was quite popular for the gentry to demonstrate both their affection for (can you say pounds sterling?), and their dominion over nature and animals by having their children's portraits painted alongside native creatures of the new world; and deer were a favorite subject to appear with boys (as in the portrait above of the De Peyster boy and deer with collar).

In North America, from British colonial times forward, our relationship with deer has been mixed and varied.  Deer populations have both risen and plummeted over the years tracking changes in the land as well as in hunting laws that have alternatively protected them and placed them in great danger.  Deer were so scarce in New England in the mid-1800's because of deforestation that Henry David Thoreau would travel long distances just to get a glimpse of one.  Deer have come very close to the point of extinction at several points in our history and have also become as prevalent as crooked politicians in recent years. Unlike the fluctuations seen in the deer population, however, the general low regard that gardeners have had for deer has remained fairly constant over time.  As early as 1818 gardener, Rosalie Calvert (1778-1821) wrote from her home just outside Washington, DC...

"I haven’t been able to enjoy the tulips because the deer come and eat them every night. We have eleven of these beautiful animals, so tame that they come all around the house...However, they do a lot of damage to the young fruit trees, and I am afraid we shall have to kill all of them this fall."

That sounds a lot like the email I get from gardening friends in Connecticut almost every day!

Here in our northern part of New England, we are surrounded primarily by forest so, during most of the course of the year, the white-tailed deer (Odocoileus virginianus) have plenty of food to eat, they don't feel squeezed out by suburbia, and we are not bothered by them.  It's only when deep snow blankets the area and food becomes more scarce that they alter their normal traffic patterns and will encroach on the garden.

Now, let me say right here, before I get any hate mail or toxic Tweets, that I think deer are magnificent creatures.  Okay, so maybe they're a little pushy.  But fairly magnificent.  And I certainly don't begrudge them their food, even it it's an occasional yew or arborvitae that I have to replace ($ca-ching, ca-ching$). However, I don't especially appreciate them nibbling to the ground, in one night, hedging or topiary that it has taken years to shape and form.

Because of the size and geography of our garden, it's impossible to protect the whole thing.  And I wouldn't want it looking like a prison--or even a deer park--anyway.  So, taking a lesson from successful small militias everywhere, we concentrate on the largest area where we stand to lose the greatest number of established plantings should we come under attack; it's there that we put up our fortress.

Here's how we do it: 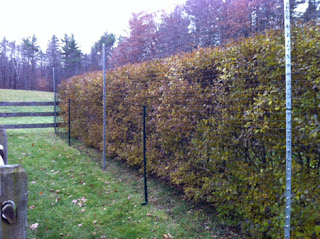 We erect a temporary barrier around the entire perimeter of the area using rolls of 8-foot high Tenax plastic deer control netting. The 1 3/4 x 1 3/4 mesh rolls are durable but light enough to be easily handled by one person; an important attribute for a gardener like me who is completely knackered by this point in the season and ready to move on to other hobbies like staring out the window from a comfortable leather chair.  A 100-ft roll weighs just 20 lbs.  The fence goes up at the end of the gardening season, usually sometime in November, and comes down when most of the snow has melted away and the garden opens again in the spring. It takes two of us about a half day to protect the garden; less time than it takes to
fill out an insurance form.

It's a simple procedure:

Step 1: We gather the few tools together that we need as we argue about how to best approach the task:

-A metal digging bar for starting the holes for the T-posts.
-T-post pounder.
-T-post puller.
-Scissors.
-A Step Ladder

Step 2:  We begin by driving 9-foot galvanized T-posts about 15-20 feet apart.  It's easier driving the T-posts if you first start the hole with a metal digging bar.  Other post systems are available (for example those from Brenner's Gardens) that require a post insert being driven into the ground, into which the upright post fits. You only install the inserts once and so this does eliminate driving posts every year.  However, we have found that with these systems there is the likelihood, in our pleistocene-like climate, of the inserts filling with water and freezing, or filling up with dirt throughout the course of the gardening season when the posts are removed unless they are capped.  We prefer the T-posts both for the ease with which they can be installed and removed and because of the clips that make it easy to attach the fencing (see next step).

Step 3: The fence is then rolled out and attached to the T-posts with simple 8" plastic cable ties (usually 3 or 4 per post) that are secured around the body of the posts.  The clips on the posts keep the cable ties, and the fence, from slipping up and down.

Step 4:  Occasionally, because of the terrain, the fencing can be loose around the bottom so it might be possible for an animal to get under. And so, a little more arguing goes on during this step about who doesn't have the fence stretched tight enough.  If we find the fence is still loose at the bottom after we've stretched it as tight as we can, we secure the bottom of these sections with one or two, 4-foot plastic "power posts" that you can simply step into the ground and use to attach the Tenax. Usually after a snowfall or two, the bottom of the fence will be frozen to the ground anyway and thus be plenty secure without any additional reinforcement. No arguments there.


Step 5:  Since the objective is is to keep the deer out of the garden, not ourselves, we try to remember to make a few doors at entrances to the garden by using small sections of fencing and two extra T-posts.  This allows us to get in and out of the garden over the winter and in the early spring.  We secure our doors made out of the fencing using the high-tech method of clipping the ends of the netting to the posts with clothes pins.

And that's about it!  So far,  Bambi has been content to spend the winters with Thumper rather than in our garden filling up on yew hedge--the creme de la creme of food as far as deer are concerned.  Which, I might point out, is supposed to be poisonous to animals.  So, what's up with that and why haven't the deer heard about it through their little deer poison control centers?

All of the fencing materials mentioned here are available through Wellscroft Fence Systems at www.wellscroft.com.

Thanks to americangardenhistory.blogspot.com for resources on the early American history of deer parks.

Posted by Juniperhillfarm at 12:07 PM