Who are these people and why are they in my garden? 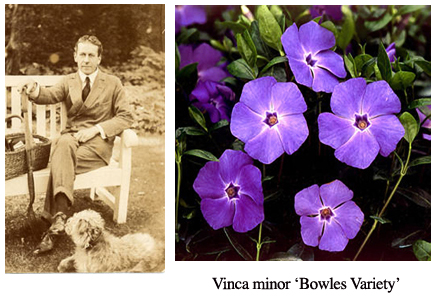 Edward Augustus Bowles (1865-1954)
A self-taught gardener, botanist, botanical artist, garden writer and plant hunter, E. A. Bowles was the author of many books, scholarly articles and scientific papers. He received the Victoria Medal of Honor from the Royal Horticultural Society in 1916.  Over 40 plants are named for him that are still available today.

A prominent member of the Royal Horticultural Society, Ellen Willmott was one of only two women to have received the Victoria Medal of Honor, in 1897.  She funded plant hunting expeditions to China and the Middle East and at one point employed over 100 gardeners in her own garden. She was known as a demanding employer who would sack a gardener who allowed a single weed to grow in one of her borders.  She is thought to have cultivated more than 100,000 different species of plants but perhaps is best known for the legend that she would surreptitiously spread the seeds of Eryngium Giganteum in any garden she visited;  today Eryngium Giganteum is also known as Miss Willmott's Ghost.

Posted by Juniperhillfarm at 2:50 PM