In addition to the streams and rivers, which are on the rise here now because of the melting snow, the other thing that begins to run rapidly this time of year in New Hampshire and Vermont is the sap--maple sap, that is.  It started to run here in our neck of the woods about three days ago.

There is never any guarantee of how long the sap run will last, or how it might fluctuate during the course of maple sugaring season.  It's possible for a farmer on one side of town to have a great sugaring year while his neighbor, on the other side of town, barely captures a trickle.  The flow of sap is all tied to the temperature of the days as they relate to the nights, the altitude where your stand of maple tress decided to set down their roots, and a hundred-and-one mostly superstitious reasons that farmers have been making mental notes about for generation after generation. 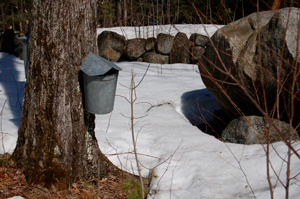 The plant that makes maple syrup possible is Acer saccharum, the sugar maple.  It's an extremely shade tolerant tree and it often grows in "stands" or large groups, also referred to as a "sugar bush."  Sugar maples are usually tapped beginning between 30 and 40 years of age.  The average maple will produce around 12 gallons of sap per season but, as the locals will be quick to point out, averages tend to be a little east of the truth and west of a lie.

In our little village there are a lot of sugar shacks per capita.  There are certainly more sugar shacks than there are places to sell syrup; we have exactly one store.  The sugar shacks range in size from some pretty large operations (one has even won the coveted "best syrup in New Hampshire" award) to some very small "sheds" that can barely accommodate a single person.  And, I'm not even counting any of the family hobby stuff that happens on top of the kitchen stove or over a hot bonfire on a Saturday afternoon.

At one time, everyone used tin buckets and metal taps to collect their sap. Lines of beautiful maple trees, all with tin sap buckets hanging off them, certainly created wonderful little vignettes for artists and photographers.  The trouble was, the artists and photographers weren't the ones doing the backbreaking work it took to collect the sap by hand and so the farmers soon wised up, forgot about how pretty it all looked, and began utilizing the force of gravity and the convenience of modern plastic.  Today, the larger operations use plastic tubing almost exclusively.  The trees are tapped and the sap runs downhill toward a giant collecting tank which is then hauled away periodically by trucks to the sugar shack for processing into syrup.

It's true, however, that many small farmers, like Chuck Hardwick in our town, still do it the old-fashioned, picturesque way.  Chuck puts out about 300-400 sap buckets every year and relies on his wife, son, and anyone who wants an authentic rural experience to help him out.  And, there are still some farmers around here who take  "old-fashioned" to the extreme and use teams of oxen or horses to haul the collected sap to the sugar house.

Although maple sugaring is hard work, it fails to classify as a sustained aerobic activity. That's because there's a lot of hard physical labor but then there's a lot of sitting around. It's the sitting around part that's so attractive. After you've been out in the cold collecting gallons and gallons of sap (it takes 40-50 gallons of sap to make just one gallon of syrup) you get to come back to the sugar shack and enter a warm, steam-filled environment that smells a little like the inside of your favorite candy bar.  There, you alternate between periods of stoking the fire, stirring the sap, and chewing the fat.  There are no phones, computers or TV, only the fire blazing away in the evaporator, the steam coming off the boil, a few chairs, and a chance to sit and have a real conversation for a change.

This weekend, March 19th and 20th, is New Hampshire Maple Producers open house weekend where sugar houses all over the state will be open to the public.  For more details, click here.
Two books about maple sugaring that are worth tracking down and reading are Noel Perrin's, Amateur Sugar Maker (Univ. Press of New England) and Helen and Scott Nearing's, The Maple Sugar Book (Chelsea Green).
Posted by Juniperhillfarm at 10:49 AM