For most of us, who struggle every day to better define our gardens, the art and practice of garden design can sometimes seem very arcane and beyond our reach.  And, as you read more and more books on the subject, you get the feeling that many garden designers are content to allow us to continue to suffer under this delusion. One who isn't, is Gordon Hayward.  It's very clear that his single professional mission in life, in his practice with his clients, in the books that he writes, and in the lectures that he gives, is to impart knowledge, not stand guard over it.  Education is the golden thread that runs through all of his work.


First and foremost, Gordon Hayward is a teacher.  Those are his roots.  Prior to his career as a garden designer, he was a high-school English teacher for fifteen years.  He knows how to communicate complex ideas (sometimes to students who aren't paying attention) and he's not afraid to take the time to educate his clients and then, when the time is right, relinquish the power that goes along with knowledge, and turn things over to them.  One of Gordon's favorite phrases is..."you can do this!."

When Gordon tackles a gardening project for a client, he begins inside the house, not outside.  For him, it's crucial that the house and garden relate. According to Gordon, "your house is the center of your garden.  The moment you fully understand the implications of that statement, designing your garden will become a more manageable and rewarding task."  Gordon believes that if you ignore this elementary precept of garden design, you'll end up with a garden that feels isolated and unattached; it's important that the doors of your house begin to define your garden pathways, that the windows serve as vantage points for viewing the garden, and that the shape, proportions, and even the materials of your house contribute to the final look and feel of your garden. And, extending this one step further, he stresses the importance of having the garden itself fit into the surrounding landscape and develop its own sense of place.

I remember the first time I met Gordon Hayward.  We were on a garden tour that he was leading and it was at an early stage in the development of our own garden.  We had reached a point in the evolution of our garden where we knew we needed some professional help to take us to the next level.   On this particular tour of a garden that he had designed, Gordon began to dissect all the reasons why this was done or that was done.  He talked about why there was an axis here and not there; why, in this particular site, the width of the perennial bed adjacent to the house had to equal the height of the house; why a garden ornament worked over there, but not over here; why a parterre had to go exactly in that spot because of the view from the window of the house; and why a red, rather than a green, Japanese Maple would instantly draw the visitor's eye to a spot in the garden he wanted to emphasize.  In short, it was a two-hour crash course in garden design and I immediately knew that this was the guy we needed.
The first thing one notices about Gordon is his size.  At six-feet, five-inches, he tends to stand out in a crowd.  Beyond the physical characteristics, however, he is deceptively soft-spoken with one of those personalities that immediately puts you at ease.  And, he's a great storyteller.  But don't let that fool you because underlying that easy manner, there's a dynamo at work.  He is a fanatical planner and organizer who has the ability to juggle multiple projects but yet has no trouble focusing on the smallest of details.  In addition to designing gardens all over the country, he is the author of over ten books and countless articles on gardening and garden design, has been a contributing editor for Fine Gardening magazine and is now a contributing editor for Organic Gardening magazine.  He also maintains a lecture schedule all over the country that would make someone in their twenties gasp for air.  And, as if that's not enough, he and his wife Mary, almost single-handedly maintain a one-and one-half- acre garden at their home in rural Vermont that's recognized as one of the finest private gardens in the country.
Gordon and Mary Hayward moved to their 200-year-old farmhouse in Vermont in 1983.  Back then, according to Gordon, they moved into a house where..."the windows rattled in the wind...the walls held no insulation, and we had to replace all of the wiring and plumbing."  And, as for starting a garden,  Gordon says that one of the first things that had to happen was "the removal of an unsightly trio: a yellow Toyota Corolla, the nearby hulk of a Volkswagen bus, and a Nash Metropolitan complete with maple saplings growing through it."  Oh, and there were the yards and yards of carpeting buried 6 inches in the soil!  Gordon says that "in those early days, design issues took a backseat to the cleanup:  rotten barn siding, rusting metal roof panels, ...tires, wheels, axles...broken glass and bottles that, twenty years later, we're still finding."  Gordon remembers that when his mother first visited the property, "she burst into tears."  To visit the Hayward home and garden today, one would never imagine such rustic and humble beginnings.

From the start, Gordon and Mary wanted to create a garden that would honor both of their heritages. Gordon grew up on a family orchard, in Connecticut and Mary on a farm in the Cotswold hills of England.  Today, the Hayward garden might best be described as a hybrid Old England-New England garden; a garden that blends the best elements from both sides of the Atlantic.  For example, one of the first sections of the garden on the itinerary is the Crab Apple Orchard, which pays homage to Gordon's childhood.  Then, there are the magnificent 90' Long Borders that culminate in an oak gazebo and echo the famous red borders at Hidcote Garden, which was located right across the field from where Mary grew up in England and a place where she worked as a teenager.

Until her recent retirement, Mary was also a teacher.  Gordon often refers to her as his muse.  She is a whirlwind, to be sure, spending every possible day in the garden.  While Gordon is writing and lecturing, she keeps the garden humming. She has been growing things since childhood, is an expert plantswoman and, like Gordon, is a born educator who seizes every opportunity to convey all the joy and satisfaction that can come through creating beautiful garden spaces.  And, she is practical and down-to-earth in her approach to gardening.  She believes that it's not enough to simply create gardens.  One also has to keep them running.  To that end, she and Gordon have written Tending Your Garden: A Year-Round Guide to Garden Maintenance (Norton, 2007).  Based on the practical techniques they use in their own garden, it's one of the most useful gardening books to come along in years. 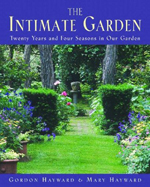 Also together, Gordon and Mary have chronicled the development of their Vermont garden in The Intimate Garden: Twenty Years and Four Seasons in Our Garden (Norton, 2005).  Although sumptuously photographed by Richard Brown, this is no "look what we did book."  Instead it's designed to offer practical design advice on how to make an inviting garden on your own property, using the Hayward's beautiful garden and their time-tested design techniques as examples.
Gordon's latest book, Art and The Gardener: Fine Painting as Inspiration for Garden Design (Gibbs-Smith, 2008), has been described as a radical departure from his other books on garden design.  However, in exploring the visual language that garden designers share with other artists, and trying to interpret these areas of intersection for the reader, one could also argue that this latest work represents a continuation of the Hayward tradition of arming home gardeners with the knowledge they need to create more beautiful gardening spaces around their own homes.

Both Gordon and Mary Hayward have been inspirational in the development of our gardens here at Juniper Hill Farm.  They have not only contributed design ideas but, through their writings and lectures, and visits to their gardens, we have learned both conceptual and practical lessons that will last a lifetime and have helped us shape the direction of our gardens here as they continue to evolve over the years.  If you haven't done so already, I would highly recommend you get ahold of a copy of one of their books.  And,  If you're lucky, you will be able to catch Gordon at one of his lectures around the country.  For a full lecture schedule you can click here.
This year, for the first time, the Haywards will be offering a traditional English tea and private tour of their gardens, in Westminster West, Vermont (for groups no larger than 8 people) from June through mid-October. Also, their gardens will be open to the public on June 25th and 26th to benefit Westminster Cares, and on August 6th as part of the Garden Conservancy's Open Days program.  For information on the teas and private tours, you can phone 802-387-4766.  You can get more details on the other events by clicking on these Westminster Cares and Garden Conservancy links, or on Hayward Gardens.  Whether you read one of their books or pay a visit to their garden, you can be sure you'll learn a lot.
Posted by Juniperhillfarm at 9:15 PM