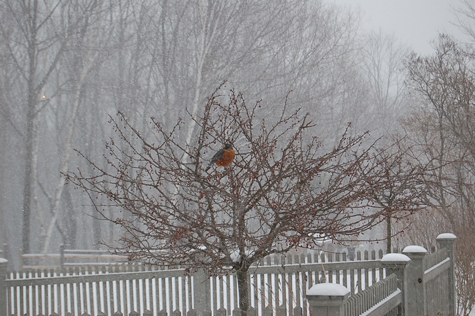 Here at Juniper Hill, one of the surest signs that Spring is on its way is when the robins invade the Tina Sargent crabapples (Malus sargentii 'Tina').  We haven't seen the robins yet this year, but we're waiting.


The photo of this "advance scout" for the main flock was taken a few years ago, on March 22, during one of those "you thought you were done with me" spring snowstorms.  Except for the robins, I'm not sure who loves these trees more than I do.  The robins love them for their small 1/4 inch fruit that, once discovered, is stripped in the blink of an eye.  I love them for their gorgeous white flowers and their petite size.  They make perfect specimen trees to frame openings, or as focal points to be enjoyed from a favorite window.  I use a pair of them as specimens to delineate the corners of the entrance to our little fenced courtyard garden where we grow herbs and lettuce.

Most crabapples are hybrids of both American and more cold hardy Siberian strains.  The Sargent crabapple is unique in that it is a true species native to Japan.  It was first imported in 1892 by Charles Sprague Sargent, long time Director of Harvard's Arnold Arboretum.  Malus sargentii has a very loose growing habit, looking more shrub-like than a tree.  Malus sargentii 'Tina' is a dwarf form of Malus sargentii that is often grown as a standard.  It seldom reaches more than 6 feet high.  Pruning a 'Tina' can be a little like playing with a Rubiks Cube since its branches want to grow toward every direction on the compass!  However, with a little practice, it is possible to keep the the tree pruned so that it maintains a relatively tight "head" and doesn't look too wild or top heavy. 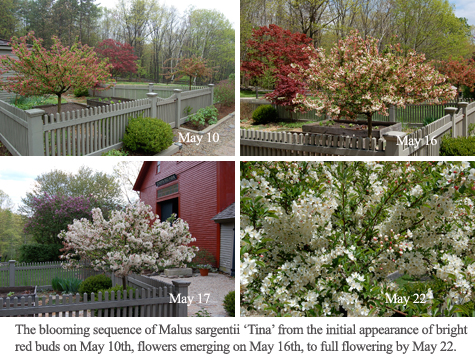 In addition to anchoring the corners of the courtyard garden, I love the layering effect that the Tinas provide in the early Spring when the deep red of their flower buds plays perfectly with the deep crimsons of the nearby Japanese Maples. Malus sargentii's are among some of the most profuse blooming crabapples, although very heavy blooming occurs only every other year.  The flowers are snow white and they provide great contrast here in the courtyard garden when their bloom coincides with the flowering of the ancient lilacs by the barn and the Tinkerbell lilac hedge (Syringa x 'tinkerbell') that encloses the courtyard. 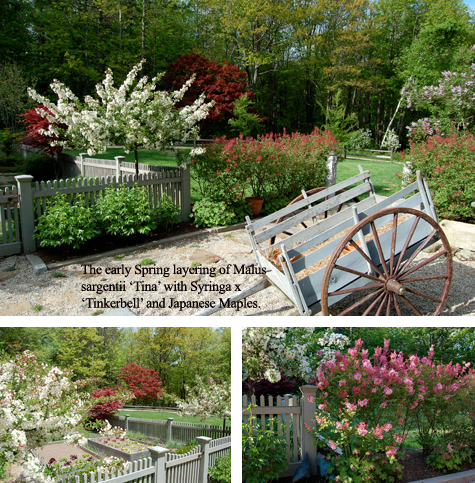 We planted our Tina Sargents about six years ago as already mature B&B trees. They require adequate moisture during the first growing season and should be pruned immediately after flowering, although they may need a winter touch up pruning as well.  Aside from that, they require little care and are especially disease resistant, as crabapples go.  I can't imagine our little courtyard garden without these beauties.
Posted by Juniperhillfarm at 9:20 PM

Email ThisBlogThis!Share to TwitterShare to FacebookShare to Pinterest
Labels: Plants, The Featured Plant