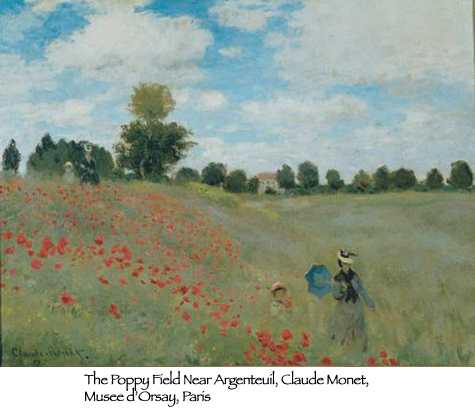 From: Brettell, Richard. French Impressionists. Chicago: The Art Institute of Chicago and New York: Harry N. Abrams, 1987, p. 83.
Since the early 1870s, Claude Monet had made multiple compositions of the same subject; a group of paintings representing the Saint-Lazare railroad station in Paris was exhibited at the Impressionist exhibition of 1877. However, there is little evidence that he intentionally worked in series until the years 1889-90.

Virtually all of Monet’s paintings in the summer and autumn of 1890 were painted near his home in Giverny, where he began a serious investigation of the agricultural season with groups of canvases devoted to the fields as they ripened and were harvested. Field of Poppies is an example of Monet’s conscious attempts to experiment with this idea. In the poppy field, Monet chose an extremely difficult and limited subject for a series. The intense greens, reds, and oranges of the fields are affected very little by different atmospheric conditions, and Monet consequently searched for variety in the skies and the shadows in the trees. He completed only three of the four paintings he intended to comprise the series; and, unfortunately, they have never been exhibited together, making it difficult to assess the painter’s serial aims or his success in achieving them.
The poppy group was followed by another series of five paintings of ripening wheat and these, in turn, were succeeded by Monet’s first major series, the haystacks. Monet became obsessed with the shape and sculptural quality of the haystack and with the dramatic possibilities of light and shade inherent in its form. Perhaps that was the reason he made many more paintings of haystacks than he did of wild poppy fields and also why he chose to exhibit only one of the poppy paintings in his exhibition at Paul Durand-Ruel’s gallery in 1891, when his extraordinary series of haystack paintings was unveiled.
In all of his poppy-field compositions, Monet explored the interplay between the vivid colors of the field and brilliant daylight. Nonetheless, the artist avoided overwhelming these canvases with his intense color palette in order to express at the same time the spacious vista of the landscape. In these and countless other compositions, Monet celebrated the flowering of the French countryside. While poppies are regarded by farmers more as a scourge than a blessing, since they intrude on crop lands, for Monet, the passionate lover of gardens, they were clearly an expression of nature as the supreme gardener. Monet’s friend, the politician and writer Georges Clemenceau, was with the painter in the summer of 1890 when he worked on the poppy series, and he wrote about it: "From this field of poppies, bordered by its three poplars, comes a [new] epoch in our history for sensation and the expression of things."
Posted by Juniperhillfarm at 4:47 PM

Email ThisBlogThis!Share to TwitterShare to FacebookShare to Pinterest
Labels: Monet, The Gallery