Thinking Outside The Boxwood 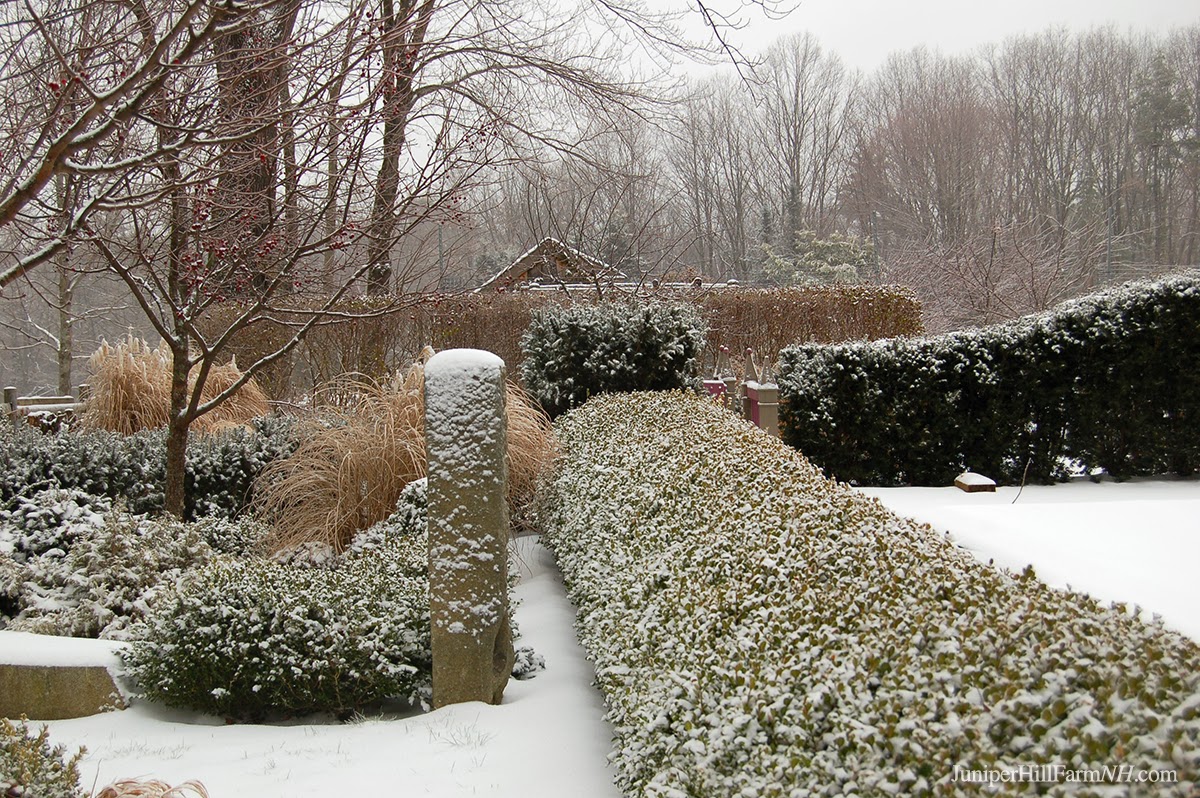 At the beginning of every winter you can find me dragging heavy wooden teepees out of the barn to protect my most vulnerable plants.  It's a winter garden chore I look forward to about as much as I do the return of the black flies in the spring.

We originally designed much of our garden here at Juniper Hill for winter interest and one way we accomplished this was to install an abundance of evergreen hedges and boxwoods.  The deer that have been known to raid and plunder our garden over the years all seem eternally grateful for the decision to install the hedges.  Their keen interest in this particular design element worries me constantly.  Even though we put up protective deer fencing every winter, I spend countless hours inspecting yews and arborvitaes for signs of nibbling.


The boxwoods, on the other hand, are a lot less worrisome in that regard because, to a deer, they're about as appealing as a plate full of peas are to a young child.  That is, they have to be starving before they'll eat them.  Yet, even though the boxwoods generally escape the notice of marauding deer, they are not worry free.  I have always been a gardener who has fumbled his way along the old gardening path and years ago I made the mistake of planting a number of my precious boxwoods in very vulnerable spots, like very close to the roof line.  Which, of course, means I now have the boxwoods to worry about in addition to the hedges. The concern is not that they'll be eaten but that they'll be squashed. Gardening is fraught with worry. 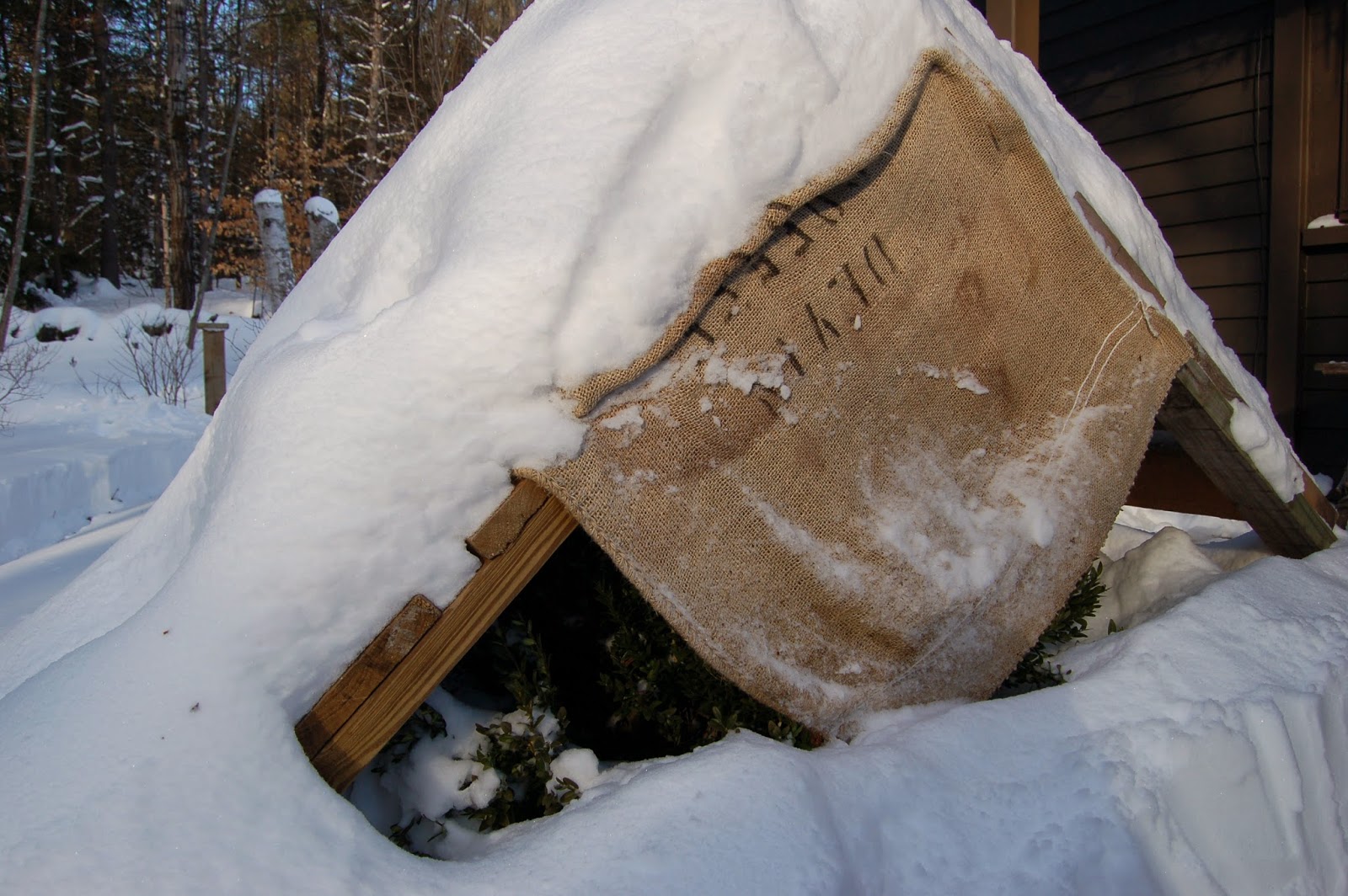 In New Hampshire, a planting faux pau like placing a plant too close to the roof line is what locals would politely call a flatlander's folly.  Anywhere else it would just be called dumb.  You see, we get a ton of ice and snow here and the roof is the first place it lands on the way to the ground.  So, for the past ten years or more, if I expected to see those precious boxwoods that I planted near the foundation of the house emerge in one piece in the spring, I was required to protect them from being crushed to death by snow falling off the roof in the winter.  Traditionalist that I am, I have always chosen to protect them in the traditional manner by building wooden structures that at various times could resemble Lakota teepees, wooden coffins, slatted drain boards, hinged Adirondack lean-tos, Swedish slogbods, or even the Great Pyramid at Giza.  The problem with this approach was that the boxwoods continued to do what small shrubs normally do, which is to keep growing.  This, of course, necessitated similar growth rates in the wooden structures.  I was constantly modifying or rebuilding my wooden plant protectors to accommodate growing plants of varying shapes and the structures kept getting larger and larger.  The end result was that our barn and garage soon filled up with an infinite variety of very large, heavy, and cumbersome wooden thingamajigs that for many months of the year served no purpose other than to take up space and perhaps offer the occasional roosting spot for a chicken.  Well, this year I just couldn't face hauling them out of the barn one more time.  I thought there had to be a better way.  And, I had an idea. 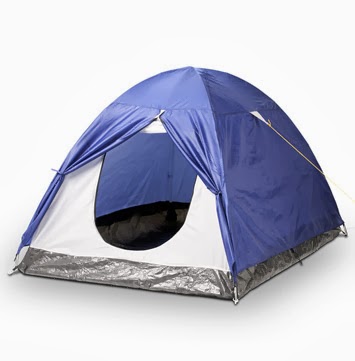 So it was that I embarked on my experiment of protecting vulnerable plants in the same way that tent manufacturers protect vulnerable campers.  I can see that puzzled look on your face.  Let me explain...

I'll admit, I'm no expert on camping.  My idea of roughing it is a mediocre room at the Four Seasons.  However, I've looked through enough L. L. Bean catalogs to know that the modern dome tent is a relatively simple structure consisting of a fabric stretched over lightweight, flexible poles that cross each other at some point along their length and thus provide rigidity.  This is the very concept that protects the camper's head from debris that might fall out of the sky, like pine cones or space junk.  I thought, if tents designed like this worked for protecting people, why wouldn't a version work for my boxwoods?  Or, for that matter, any other plant placed in a vulnerable position against the foundation of a house.  Which, I might add, accounts for about 90% of the plants in most American yards and gardens.  I would certainly like the "lightweight" part; a lot less grunting and cursing at the start of every winter.  And, storage would never be an issue.  But would it offer enough protection?  I decided it was worth a try. So, here's what I did... 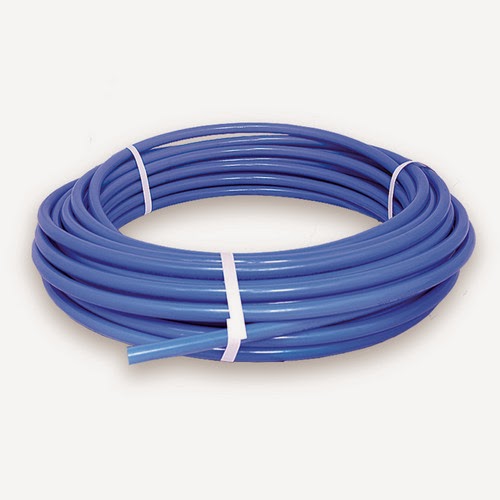 I purchased some one-half inch flexible polyethylene tubing (PEX).  This is the stuff commonly used by plumbers to get water running to and fro in your home.  Assuming, that is, that they haven't left it at the shop and actually have some on their truck when they show up at your house, which they almost never do.  If you have a lot of plants to do, you can buy this in rolls of 100 feet for between $25 and $30.  I bought mine in 10-foot sections. 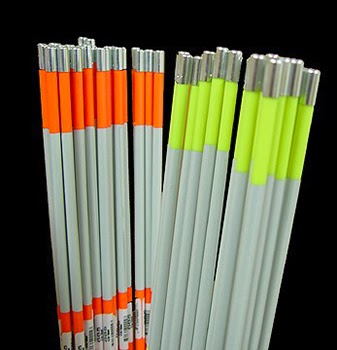 I also bought several 6-ft tall, 5/16" diameter fiberglass driveway markers that sell at most hardware stores for between $1.75 and $3.00 apiece.  These are the little fiberglass poles with the florescent ends that warn the snow plow guy that he's about to plow up your lawn instead of your driveway.  They work great until about the third snowstorm when they get plowed up right along with the lawn.  To round out the materials list, I also needed a pack of 6-inch plastic zip ties (packs of 100 are under $10) and a 4-foot wide roll of burlap (available at your local nursery supply or garden center).

The first thing I did was cut each of the 6-ft fiberglass driveway markers into four 18" pieces. I positioned the 18" rods at four diagonal corners at the base of the plant and drove them in with a hammer so that about 3" of the rod was left exposed above the ground.  The PEX tubing would serve the same purpose as the hoops in a tent and so I bent them over the shrub that I wanted to cover and cut them to length.   I used two pieces of PEX per plant (three pieces would probably make the structure even more rigid) and simply slid the ends of the 1/2" diameter PEX right over the 3-inches of fiberglass driveway marker that was left exposed above ground (see photo above). 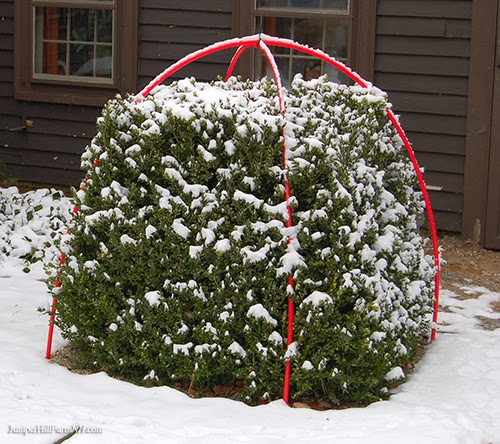 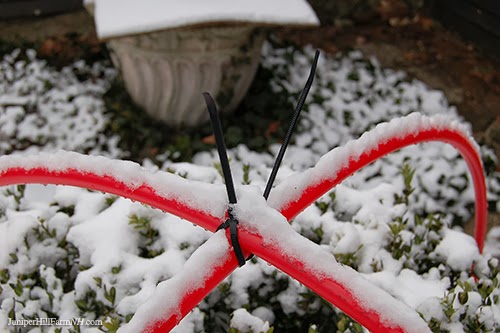 At the top of the plant, where the two pieces of PEX intersected, I secured them together using two plastic zip ties. 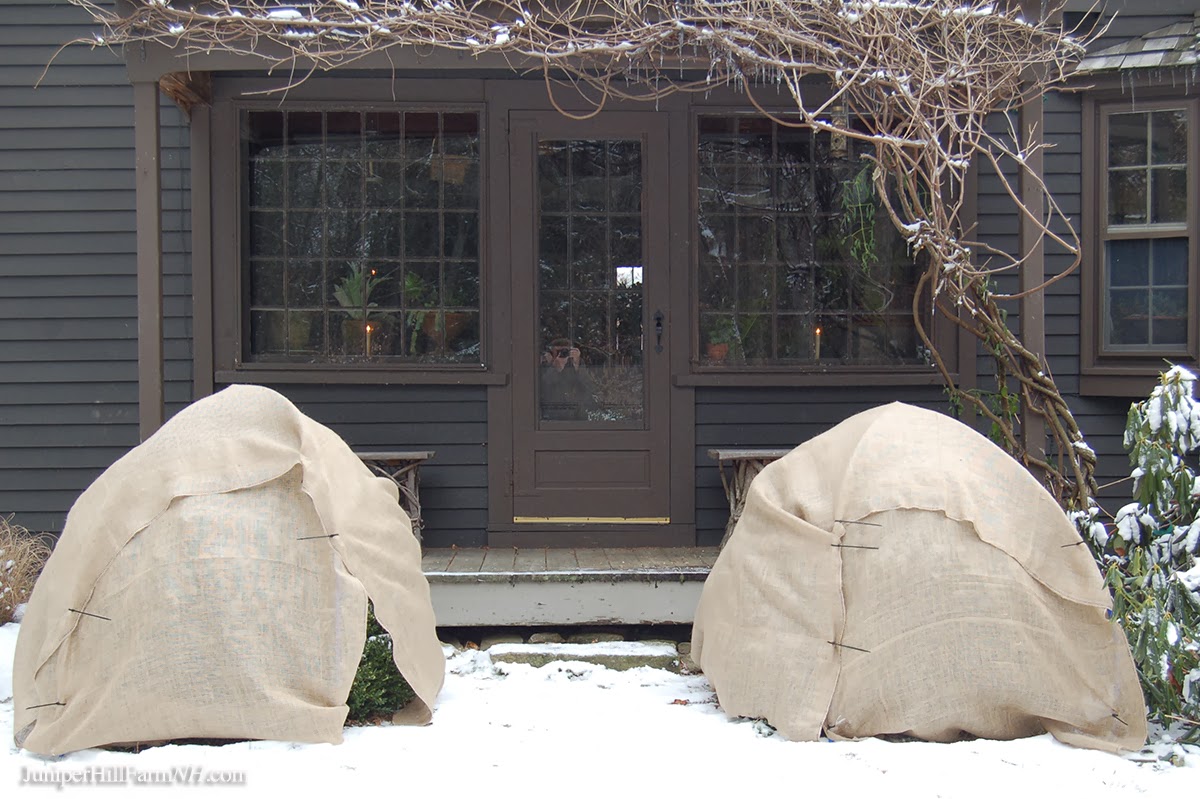 I then stretched burlap over the entire frame and secured it at a number of points along the length of the PEX tubing with the plastic zip ties.  Quick and easy.  On larger plants, like the Newport Blue boxwoods shown in the photo above, I had to overlap two strips of 4-ft wide burlap in order to cover the entire plant. 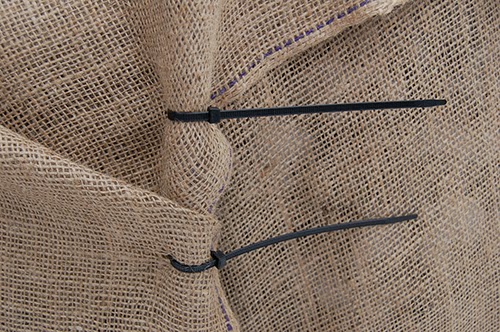 The plastic zip ties worked well to "stitch up"  the seam as their pointy ends slipped right through the burlap, without any need to punch a hole. 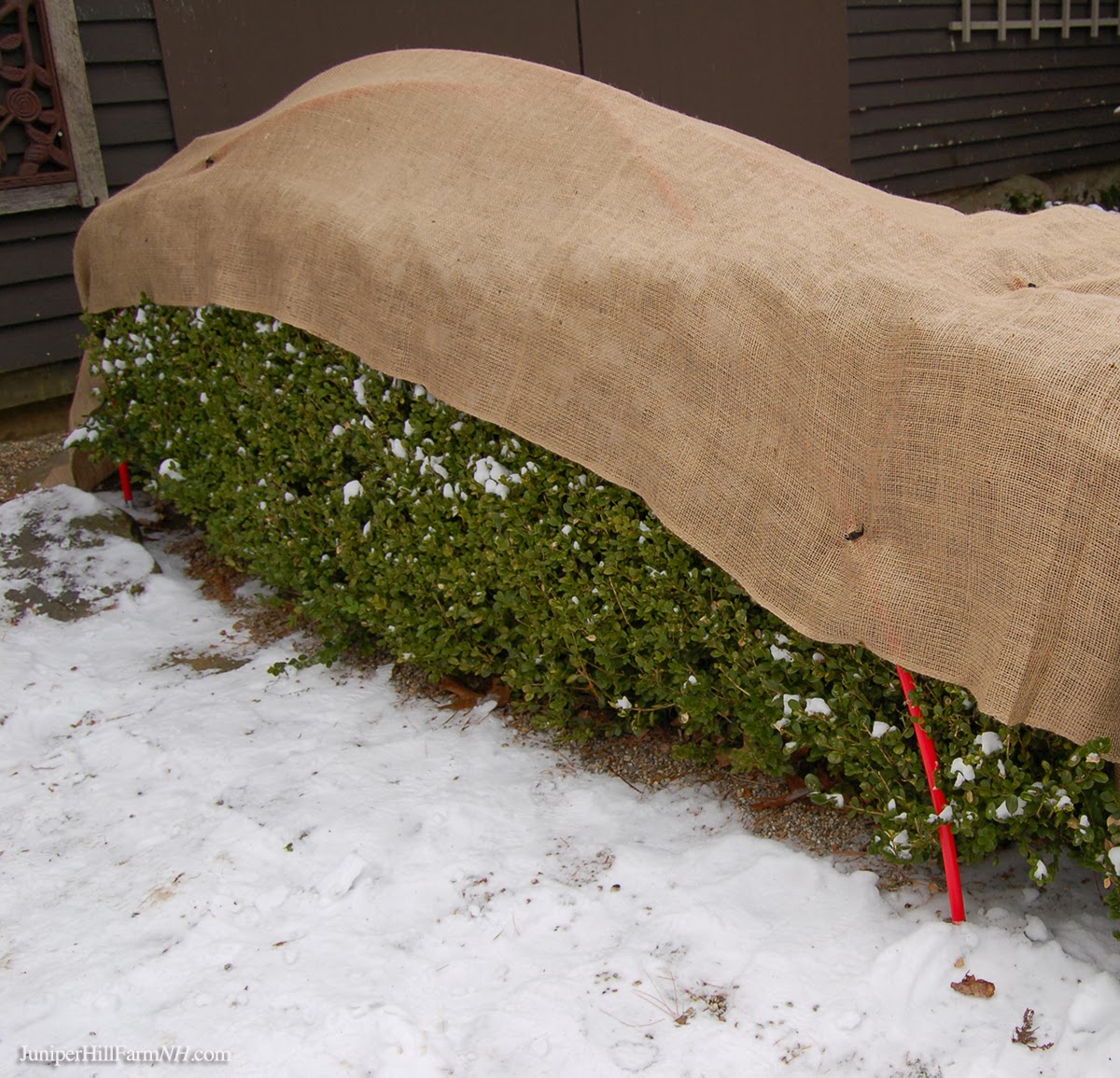 At right is a photo of a small boxwood hedge at a vulnerable spot under the roofline, protected by longer sections of the PEX tubing overlapped with burlap. 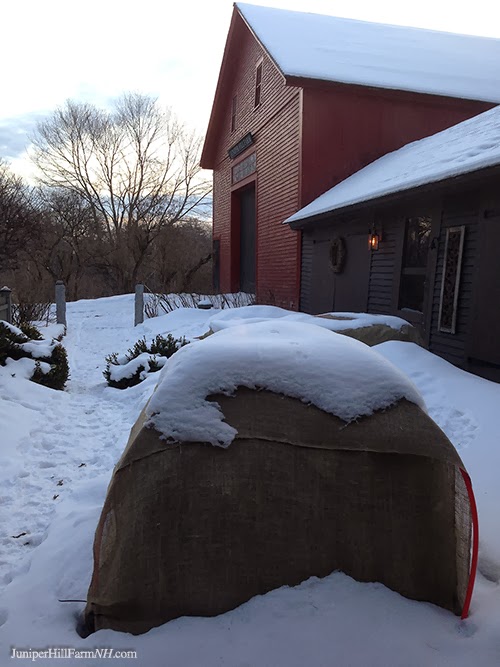 The PEX tubing is stiff but very flexible providing the same lightweight rigid frame as the modern dome tent. 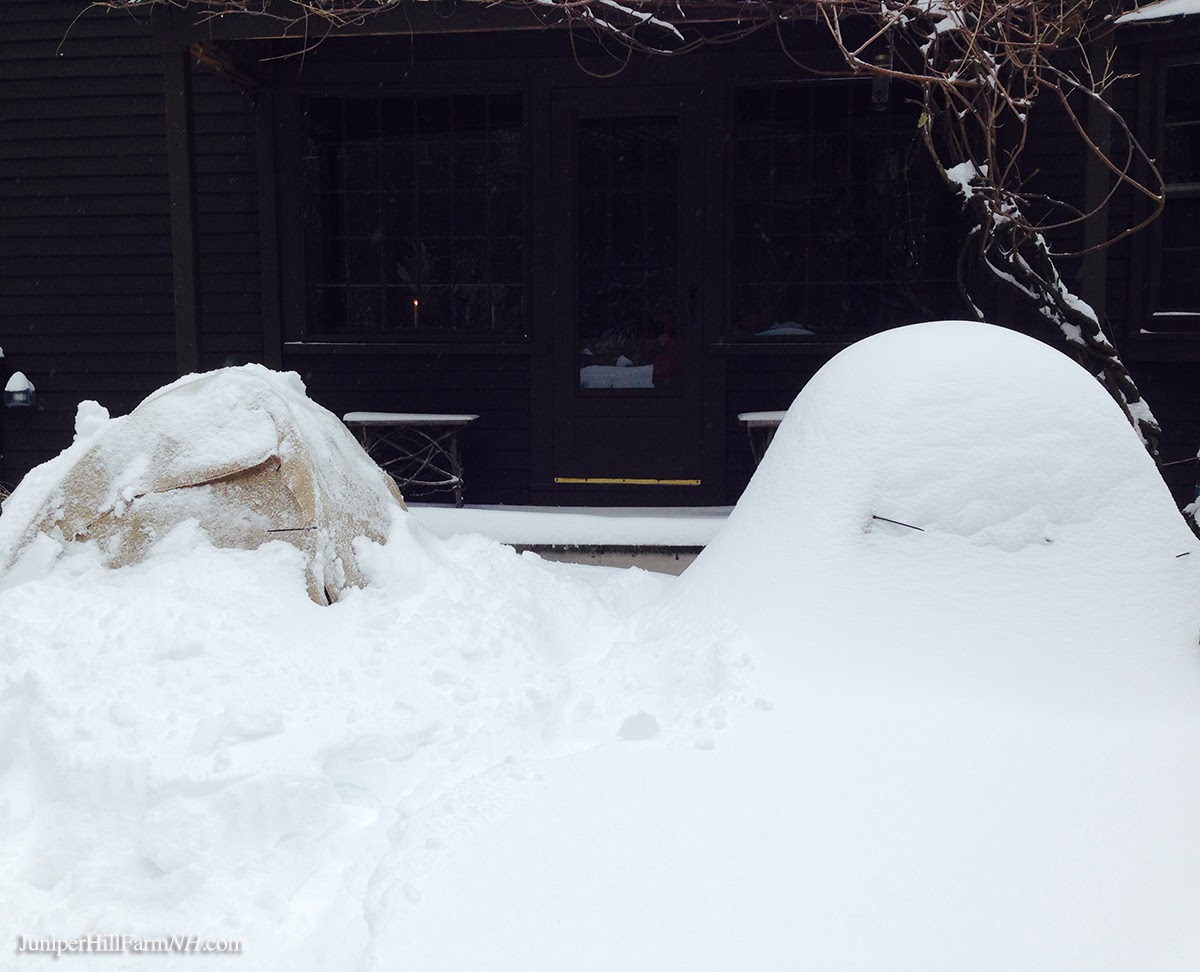 I called this an experiment because that's exactly what it is.  We are about half way through the long winter months here in our corner of New Hampshire and so far the tent-like structures have done a remarkable job.  Just like a dome tent, the tube frame has some spring to it so the snow is held away from the plants and it brushes off easily. We have had a few large snowstorms this winter and, thus far, the frames have been able to withstand the weight of the snow just fine.

The tent-like structures were quick and easy to erect and so light that I could carry all the materials I needed for many plants under one arm.  Contrast this with the two-person operation that was required to haul each one of the old wooden teepees from the barn and put them in place.  Dismantling the lightweight frames will also be a cinch and summer storage for the tubing and burlap will take up less space than a medium sized garden pot.

There are some years when winters become so harsh that the snow can pile up pretty high.  So high, in fact, that little corners of the garden that look like this in June... 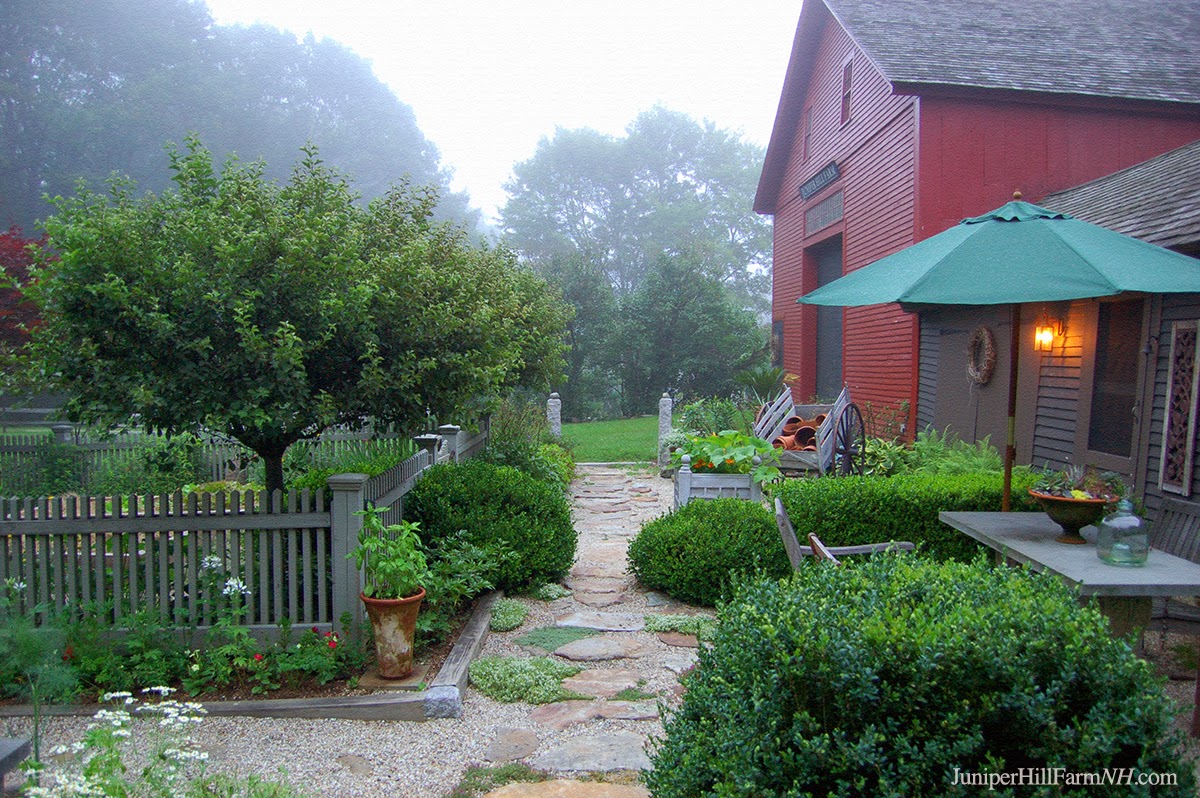 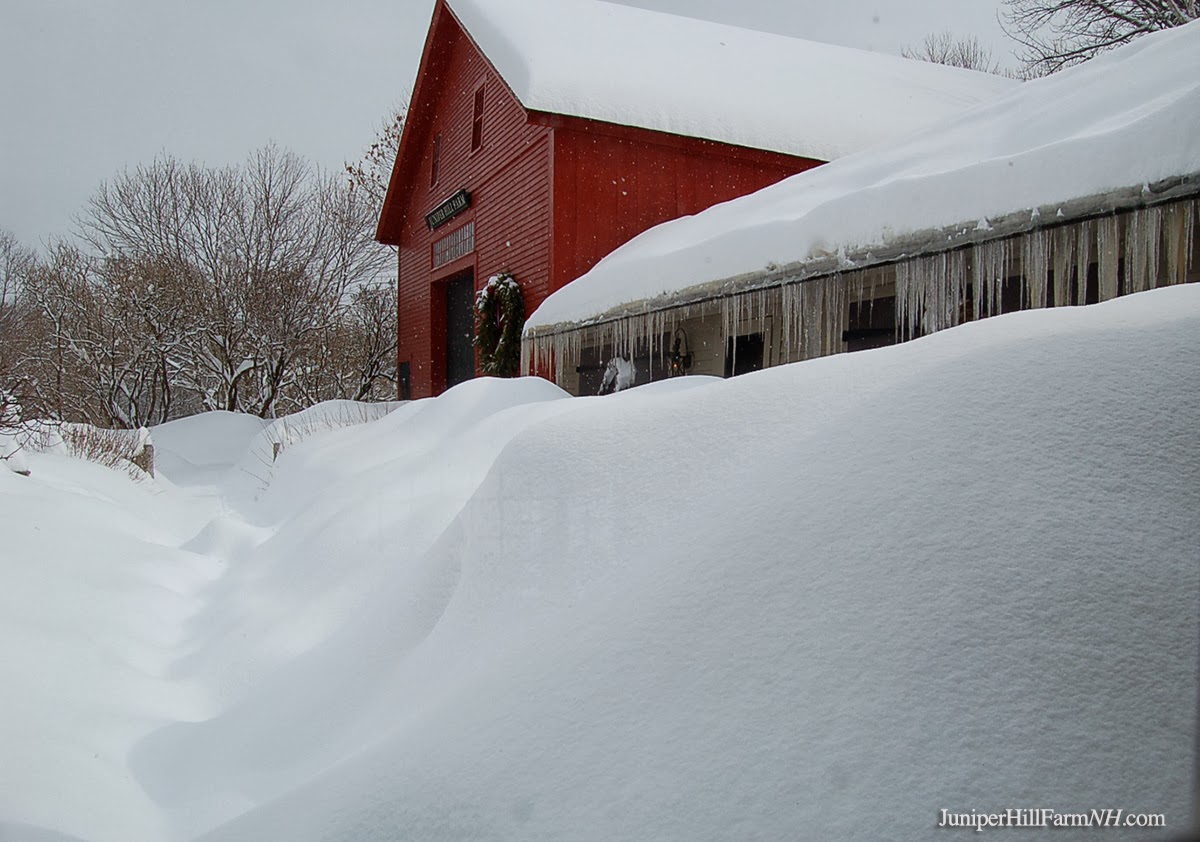 It is during those winters that my new, lightweight plant protectors will really be put to the test.  But I'll keep you posted, as they say.

Here's a mid-February update on the effectiveness of the dome structures.  As you can see in the comparison photos below, the snow has continued to pile up yet, even with a heavy load of snow on top and surrounding the boxwoods, the structures seem to be doing their job.  So far, so good! 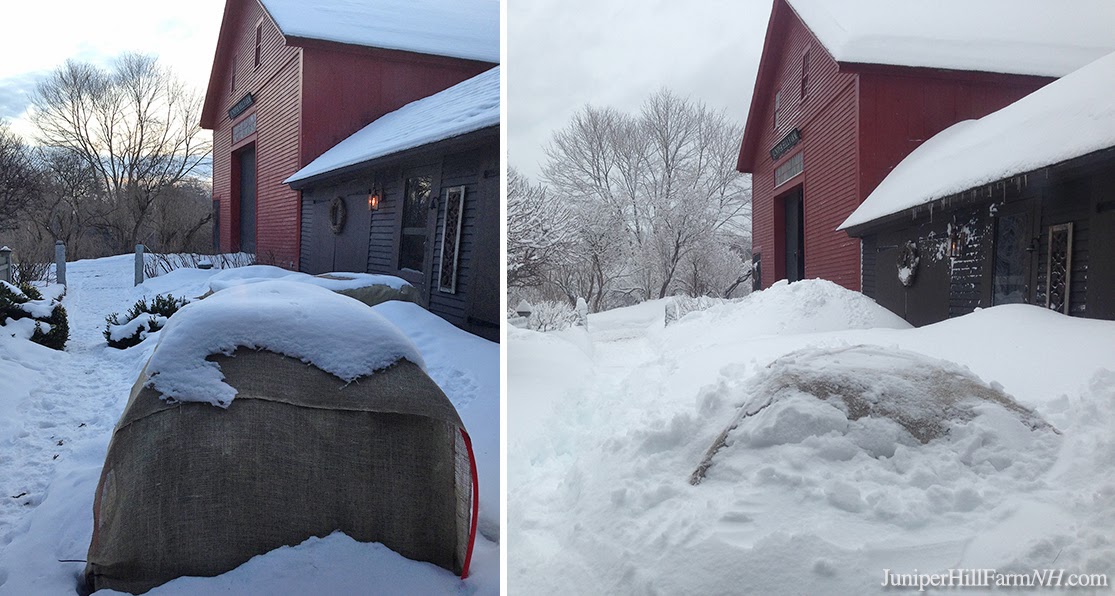 Posted by Juniperhillfarm at 10:38 AM