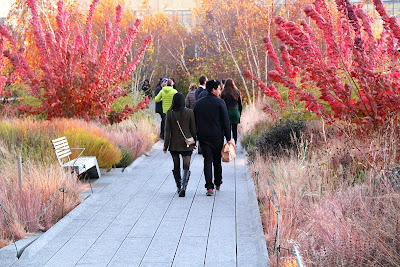 The garden’s power to transform experience was never made clearer to me than a late November week when Mary and I walked south down the full length of The High Line on New York City’s West Side.  After seeing MOMA during the morning, and having a superb brunch at Norma’s in the Hotel Parker Meridien, we set out for the High Line with our niece Rebecca and her mate Michael who live in London; they were visiting NYC for the first time.

We got a cab from 56th street to the corner of Tenth Avenue and 30th Street, the present northern limit of the completed High Line and over the course of roughly two sun-filled hours, we walked the length of the garden.

It was simply magical to be in a garden roughly 30 feet above the streets walking in full sun – not the shade thrown by 70 story skyscrapers on nearby 6th Avenue – with hundreds of other visitors.  That elevation provides the sensation that you are above the city, just that much removed from its tensions so that you and everyone relaxes, yet you are still very much in the city.  It’s a fruitful dichotomy made even stronger by the fact that this garden is planted literally within the matrix of abandoned train tracks. 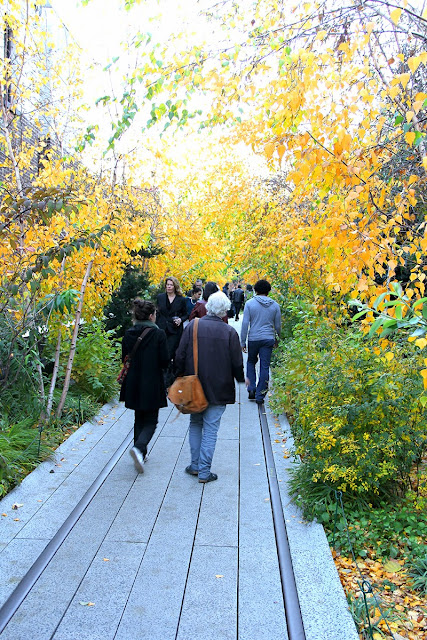 The narrow walkway surface is sometimes metal mesh but more often it’s peastone imbedded concrete.  Being narrow, it brings people walking north close to those walking south. Virtually everyone was talking - we heard Spanish, Dutch, German, French, Japanese and Russian being spoken - and virtually everyone was smiling.  But the designers have also provided calm setbacks here and there along  both sides of the stream that is the walkway. In many of these quiet eddies is an intimate single bench.  Along wider sections of the walkway were beautifully designed wooden benches.  People were texting, talking, checking their i-phones, writing, listening to music, people watching. 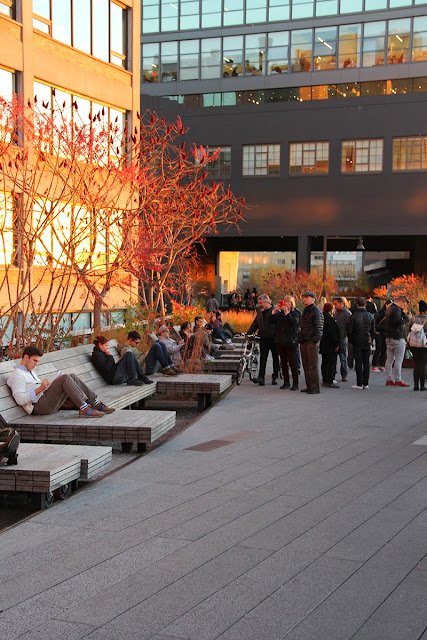 At one point, we four stepped off the main path into one of these intimate setbacks for four or six people so I could take a picture of several Amelanchier in their red fall foliage. I didn’t realize that I was inadvertently photographing a young cooing couple in the next setback some fifty feet away.  Rather than take offense, they started mugging for me. (That would never have happened in Central Park.) 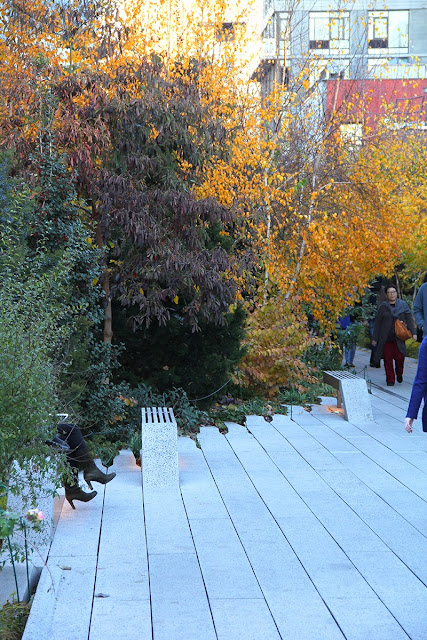 The walkway, which ranged from 10’ wide to perhaps 30’ wide as it passes under a hotel, is bordered on both sides with gardens that, even in late November, were alive with color and texture. Witch hazels blazed red against bright green Hinoki Cypress.  Amsonia had turned bright yellow next to the last blue of Raydon’s Favorite Aster.  Lespedeza was just finishing its bloom yet Persicaria ‘Firetail’ was still red, red, red.  Evergreen ferns popped up between massed Brunnera “Jack Frost.”  The leaves of Boston Ivy shone brilliant red against a building’s creamy-white stucco. The purple-red leaves of several Cotinus glowed like embers against the setting sun, while under them were the beige foliage of Prairie Dropseed grasses intermixed with the deep green basal leaves of Echinacea and evergreen Heucheras. The yellow leaves of six or eight year old birch trees arched so as to create a leafy tunnel of the walkway. No municipal gardening here. This is a true garden. (I spoke to one gardener who told me twenty people look after the garden during the day, ten more come on duty late afternoon. The garden is relaxed yet immaculate.) 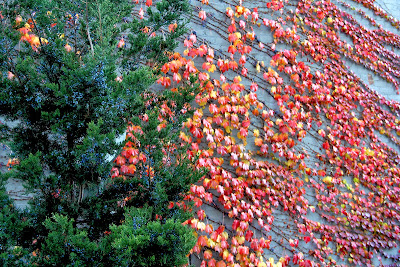 It transforms people. Walk the sidewalks of 5th Avenue and people step silent, eyes down, remote. On the High Line, people talk, stroll hand in hand, feel the warmth of the sun, look up or out or ahead, photographing one another, the garden and the cityscape, all the while feeling the easy pleasure of what to me felt like community. Every age group was there: babies in strollers, young parents, grandparents, older businessmen, even a very, very old black woman, standing, hunched, alone, doing her best to look up and just take it all in. 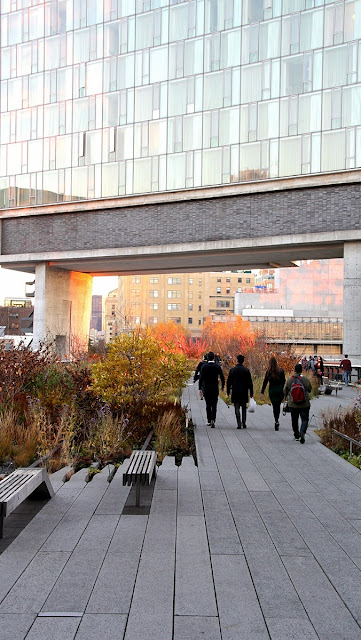 Real estate developers along the High Line clearly get the point. Sleek modern hotels and apartment buildings are going up here and there along the full length of the High Line, transforming the West Side. The High Line has such quiet, abundant energy that one real estate developer turned the noun “High Line” into a verb:  “High Line Your Business: 510 West 22nd Street” declares a huge advertising sign. Here and there you get views of the Hudson River and working tugboats. Other times you can see crosstown. 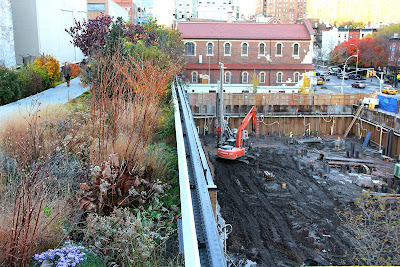 The sun was setting as we reached West 12th Street and then Gansevoort where we walked down the steps and back into street-level life, transformed by this garden. Mary made one of the most compelling observations as we left the High Line. The inspiration for Piet Oudolf’s planting scheme clearly came from the way nature had planted this garden before people even showed up. Native plants had settled in over decades of disuse to create a garden-like look. That “garden”, planted by wind and birds, is the basis for Oudolf’s design, one that is a gentle step up from nature. Visitors intuitively get the point. 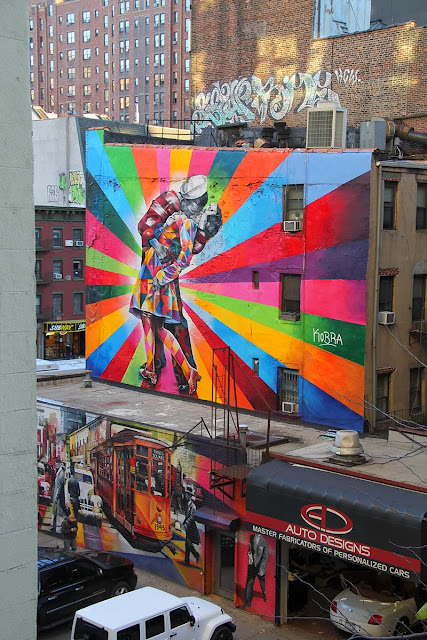 All photos by Gordon Hayward

For more info on the High Line click here. 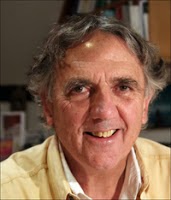 Gordon Hayward is an acclaimed garden designer and lecturer and the author of over ten books and countless articles on gardening and garden design. For more information on Gordon, you can click here or visit his website at  www.haywardgardens.com.

Posted by Juniperhillfarm at 4:29 PM