Thinking of You: A Walk Around the Garden and Some Plant-Triggered Memories 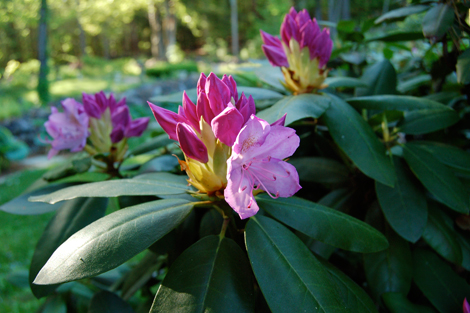 Things are beginning to flower all over the garden now, adding splashes of color here and there.  It's nice to see something other than solid green for a change.  It's the peak of rhododendron color for us this week.  Flower buds, like those in the photo above, have finally opened completely.  We inherited many of our ancient rhododendrons from Mrs. Parker, the previous owner who lived here for many years, and their bright and bold colors always remind us of her.  There is a huge mass of them completely lining the west side of the house that are such a deep pink that when viewed as a whole they appear almost cherry red. 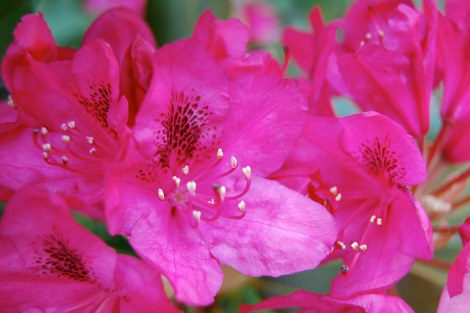 And then there are my favorites which are scattered around the property that have a much subtler pinkish tone. 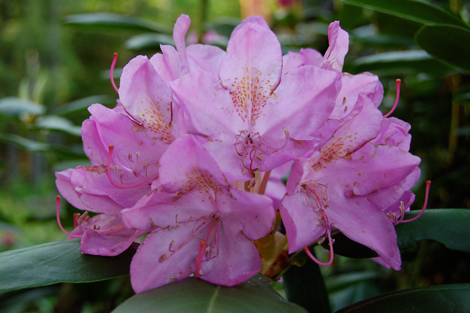 In addition to the rhodies, this place is also top heavy with lilacs.  There is no other plant that reminds me more of New England than the lilac.  We love their fragrance so much that we purposely try to extend their bloom season by planting varieties that flower at different times.  You can read an earlier post about this by clicking here.
Like every old New England farm, there are some ancient lilacs that grace the front entry of the house and surround the old barn and they are always the first lilac to flower. But we have also added some newer hybrids, like the more compact Syringa 'Tinkerbelle' shown in the photo below, which blooms later.  This small lilac hedge encloses a courtyard where we often sit in the morning to have coffee and, when the flowers are blooming, the fragrance is absolutely intoxicating! 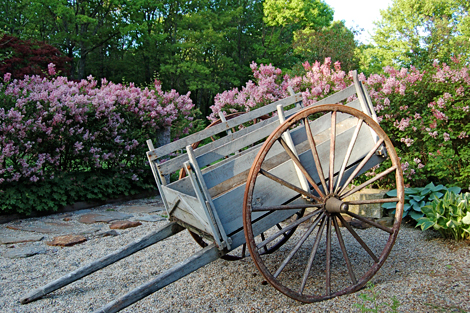 We are not the only ones who enjoy the lilacs.  The Tinkerbelles are also a favorite of the Eastern Tiger Swallowtail butterfly and during the past two weeks, when the flowers were at their peak, the shrubs were completely loaded with Swallowtails feeding on the nectar. 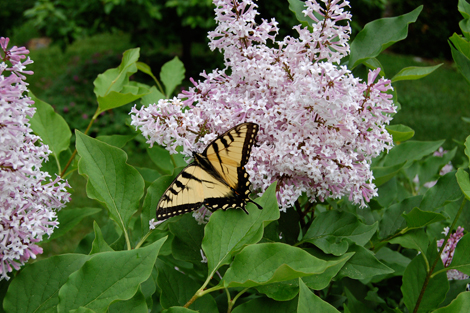 The Syringa Meyeri 'Palibins' which are standards and surround a more formal area are also blooming now.  These appear to be several weeks ahead of schedule this year, not even allowing us enough time to fill the urn that sits at the center of this garden. 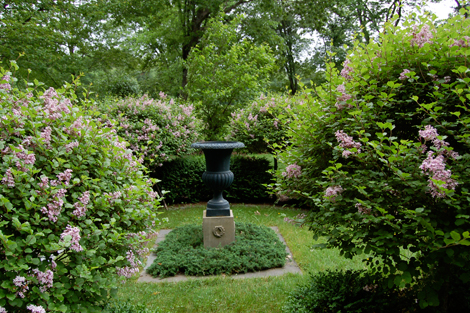 Just adjoining this area, along the split rail fence, are the long hedges of Miss Kim lilacs which are usually one of the last lilacs to bloom here.  Many of these are flowering now, as well. 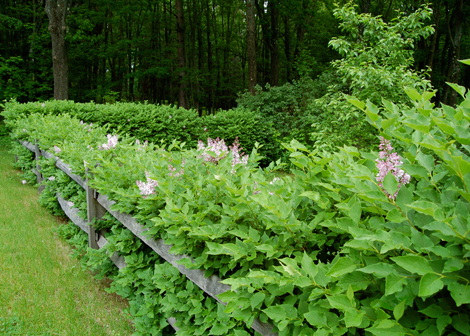 The Crimson Cloud Hawthorn trees that line the drive have just finished with their show of tapestry-like flowers (more on these trees in a post to follow)... 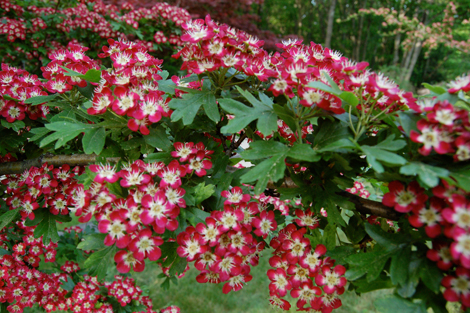 ...and the dogwoods are still in flower. 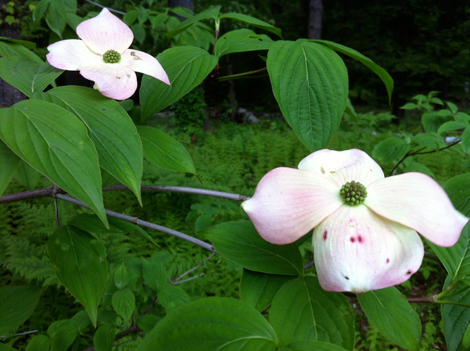 The wonderful flowers of Philadelphus coranarius (Mock Orange) are now beginning to spread their fragrance throughout the garden.  You can click here to read about this shrub and the pleasant childhood memories I always associate with the scent of this plant. 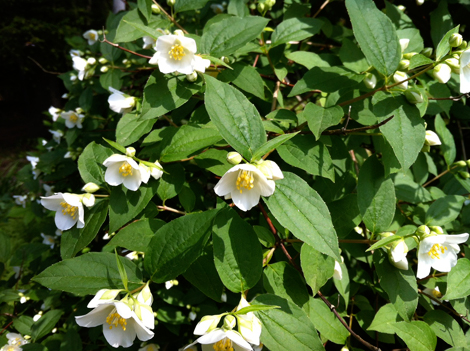 And speaking of memories...as I walked around the garden this morning, I couldn't help but think about all the things a garden can represent beyond just a mere collection of plants or the execution of a clever design.  I believe one of the most important functions a garden can serve is to trigger memories that take us back to a certain time and place in our lives, or to remind us of those connections with family and friends that form the real fabric of our existence.  There are so many plants in our own garden that have been gifts from friends and fellow gardeners that it's impossible to walk by them without thinking of the kindness and generosity of the people who gave them to us.  In addition to Mrs. Parker's rhododendrons mentioned above, right now there's a beautiful bearded iris in bloom that was given to us many years ago by friend and neighbor, Roger Swain.  I'm not sure exactly which bearded Iris it is, but every year at this time, when its buds have burst open, we practically announce to the world that..."Roger's iris is flowering!" And so, Roger's Iris has become its official botanical name around here. 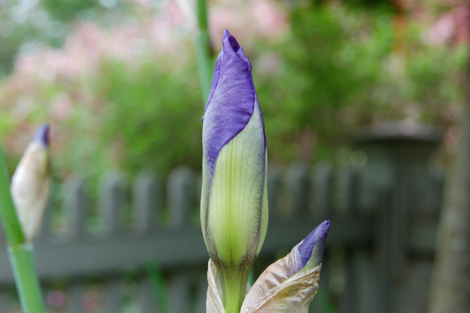 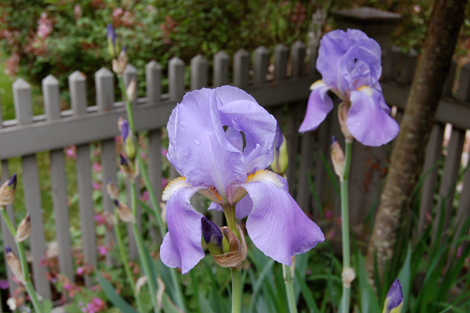 And, there is the plant that we officially refer to as The Neilley Hellebore that sits right by our front door and, for several years now, has provided some of the first flower color of the season; I don't know exactly which hellebore it is, but I do know it was a wonderful gift from Greg and Ellen Neilley and so it now bears their name. 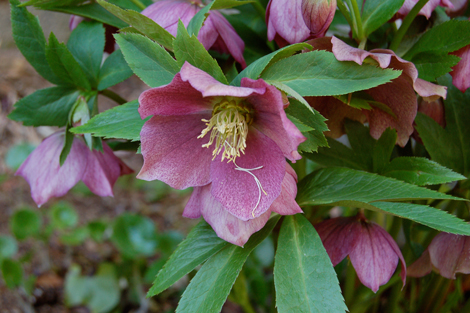 And in our newly constructed frog pool area, there are now some wonderful Quick Fire Hydrangeas, Ivory Halo Dogwoods, and a Aesculus parviflora given to us by good gardening friends Don and Lillian Stokes, as well as a treasured Blue Billow Hydrangea that we received from Lynden Miller.  The completion of this new pool would never have been possible without the help of many of our gardening friends and so it will always be a reminder of their kindness.  There will be more on its construction in a future post. 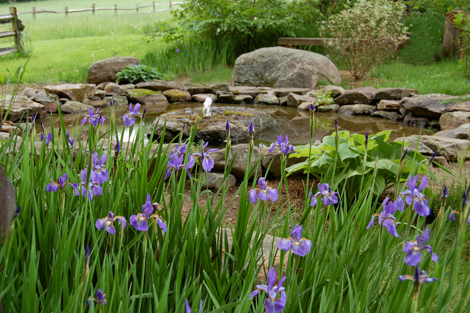 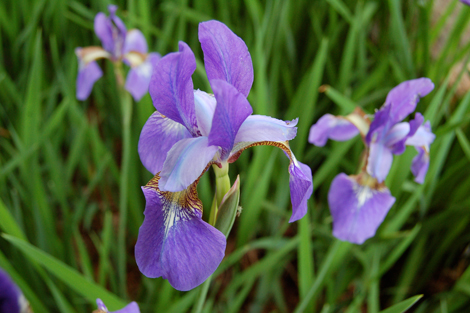 There is plant after plant scattered throughout the garden given to us by dear friend Maude Odgers and I can't walk by an Angelica Gigas in our garden without thinking of gardening buddy Michael Gordon, who gave us our first seedling of that majestic plant.  There are plants, as well as many design inspirations in the garden, that always make us think of our good friends Gordon and Mary Hayward.  There is a Calamagrostis brachytricha, a Phormium, and the Viburnum 'Mary Milton' shown below (which, I'm sure, had a spell cast over it because it flowered so young) that were gifts from dear friend and plant charmer, Tovah Martin. 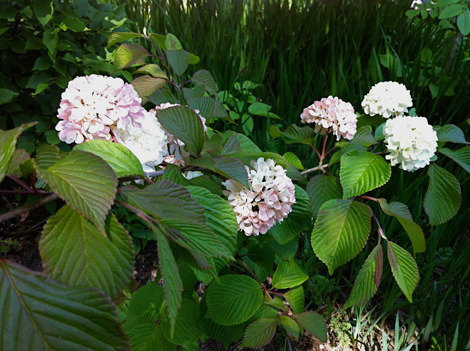 And, there are many plants rooted here now because friend and neighbor Shannon Turcott would often show up at the garden unannounced in her "Ponemah van" which was always loaded with horticultural goodies.  There have been bulbs from friend Jenny Lee Hughes and innumerable hostas and peonies from family and other gardening friends; plants that are known simply to us now by their givers name and that never fail to elicit many pleasant memories that remind us of the kindness and generosity of the gardening community. 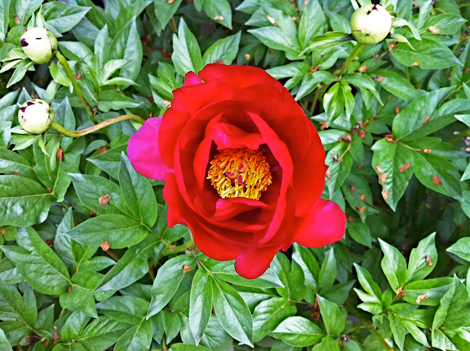 Henry Mitchell, who for many years wrote a gardening column for The Washington Post and could go on a pretty good garden rant when he wanted to, once said, "it's risky to give a gardener a plant unless you know he lusts for it.  Many gardeners would go wild with joy if you gave them a box bush, but many others would have no use for it."

Well, I can't say that I totally disagree with Henry.  However, I think the secret is to surround yourself with gardening friends who know what you lust after.  Based on all the wonderful plants that have shown up on my own doorstep, I think all of my friends have my lusts figured out.  And, that means they also know that I would be over the moon with a box bush!

Posted by Juniperhillfarm at 11:27 AM