Turning Over A New Leaf: How Senescence, Marcesence, and A Little Immaturity All Make For A Greener World 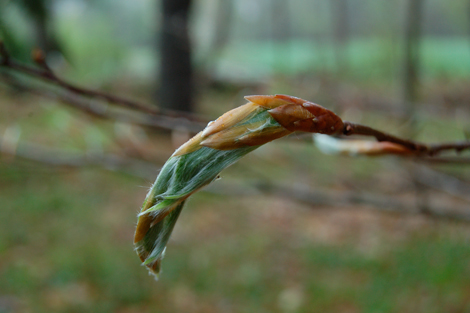 New England gardeners always feel a little behind the curve in the Spring.  When gardeners further south have already moved well beyond spring bulbs and ephemerals, our trees are just beginning to show signs of green.  Well, I'm happy to say that it feels like we are catching up just a little, as things are really leafing out here now.  And, some of the new, emerging foliage on the trees and shrubs can be quite striking.  You see many more different shades of leaf color this time of year than you will see at the height of summer when the leaves are mature; the variation in hues only being surpassed in the autumn.  Here in the New England forest, we are lucky to have such a diversity of tree and shrub species that provide an endless variety of leaf size, form and color.

Leaf size can not only vary from species to species, and from young leaves to more mature leaves, but it can also vary within the same tree.  Many trees have both smaller, so-called sun leaves and larger shade leaves.  In an effort to regulate surface exposure and photosynthesis, leaves that grow on the sunny side, or on the top of the crown of the tree, will be smaller, whereas those that grow on the shaded part, or north side, will be larger.

Leaf form and shape can help us identify the species of a tree. There are simple leaves, compound leaves and doubly compound leaves and within these major divisions there are many variations.  And, to help us narrow our identification even further, the arrangement of leaves on the twig of a tree can provide additional clues as to the species.  There can be opposing, alternating and whorled arrangements on the twig.  Leaf shape can also vary within the same species and even within the individual tree.  Japanese maples are an example of this, where an almost infinite number of leaf shapes can exist from shallowly to deeply cut.  It has been said that you could make a lifetime study of the different leaf forms from a single Japanese Maple tree and still not get through all the variations.

Leaf color is not only for the fall.  This time of year, there are the subtle green and ochre colors of the newly emerging leaves that contrast quite dramatically with the blazing reds and oranges that they will become in the autumn.  And, although many of us overlook them, there are the tan and russet leaves of the oaks and beeches that hang around for the winter.  These marcescent leaves, as they are called, make for one of the most interesting stories in the forest.

Trees lose their leaves through a process called abscission whereby chemicals and growth regulators seal off the area where the leaf is shed in order to protect the tree and conserve resources.  Think of abscission as a sort of management tool for the tree in dealing with its own senescence.  Deciduous trees do not lose all their leaves at once or just in the fall.  Some trees may have particularly strong abscission zones and hold onto their leaves going into the winter. When a tree holds onto its leaves throughout an entire winter, the new, emerging leaves that appear in the spring do not grow and push the old leaf off.  The new leaves emerge from leaf buds and don't touch the old leaf.

It is not completely understood why some species of trees hold onto their leaves for the winter while others don't.  Some have suggested that it may be an adaptation of the tree to protect the buds below the leaves from marauding deer and moose who find the taste of the still-clinging dead leaves unpalatable. Other scientists suggest that we are witnessing a yet incomplete evolution in some deciduous trees.  In other words, beech and oak trees, noted for holding their leaves well into winter, may not be completely finished evolving from evergreen trees, which were the first trees on the evolutionary time scale; they may represent a sort of middle ground.  The advantage of being evergreen, of course, is that the tree retains the ability of having it's leaves be photosynthetic for a longer period of time and avoids the loss of nutrients associated with dropped leaves.  What is pretty clear, however, is that leaf-holding in beech and oaks most often occurs in immature trees.

The organs and tissues produced by a young plant are different than those seen on the same plant when it is an adult.  This phenomenon is known as juvenility.  And in trees, for example, the branch structure in juvenile trees may be leaner and grow more upward, and leaves may be larger, thinner, or more irregular than those seen on the adult plant.  Some juvenile trees, like beeches for example, may not develop an effective abscission zone at all and thus will retain their leaves throughout the entire winter.

And, just to complicate things a little more, juvenility in trees doesn't necessarily refer to the age of the tree itself but rather to the plant tissue within the tree.  In trees, the change from juvenile to adult tissue takes place a certain distance from the ground and this distance varies from individual to individual.  This is why we will often see rather large, mature oaks and beeches retain their leaves throughout the winter on lower "juvenile portions" of the tree.

All of this arboreal mystery becomes even more perplexing when you try to apply theory to the real world.  For example, several years ago we purchased three Japanese maples (Acer palmatum 'Bloodgood') all of the same age and size, and from the same nursery.  We then planted them not more than 30 yards apart.  For the past two winters, two of these Japanese maples, behaving in the most mature manner, shed every one of their leaves in the fall--right along with the birches, ashes, and other maples--whereas the third tree, acting like some sort of juvenile delinquent, has held onto almost every leaf well into spring.  Go figure!

For a fascinating account of the amazing world of trees I recommend Seeing Trees: Discover The Extraordinary Secrets of Everyday Trees by Nancy Ross Hugo and Robert Llewellyn as well as The Trees In My Forest by Bernd Heinrich. Click on the images of the books below for more information and how to order. 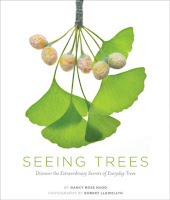 Posted by Juniperhillfarm at 10:11 AM