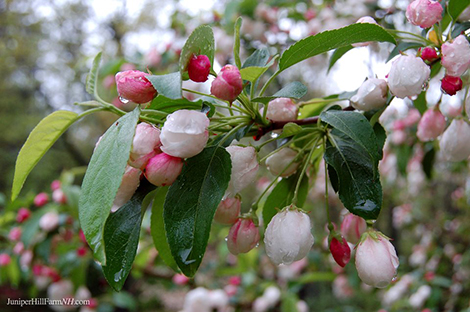 It's crabapple season here at Juniper Hill.  Crabapples are usually grown for their ornamental value, although they are often used as 'polinizers' in apple orchards.  Because of the plentiful blossoms on crabapples, they are particularly attractive to bees and many orchardists will intersperse a few crabapple trees among a row of orchard apples in order to encourage pollination.

The fruit of the crabapple is extremely sour to taste but this doesn't seem to bother the birds who find it to be especially palatable in the early spring when food is scarce and when many varieties of crabapples are still holding their fruit from the previous season.

In our gardens here, the pink and white blossoms of the crapapples provide the first real flower color of the season as they light up the landscape and get the bees stirring. 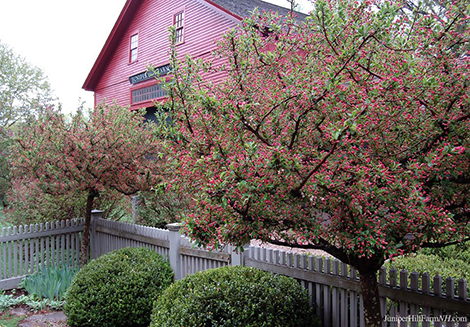 A photo of Two Malus sargentii 'Tina' in the courtyard garden, when they were absolutely loaded with buds and just about ready to pop! 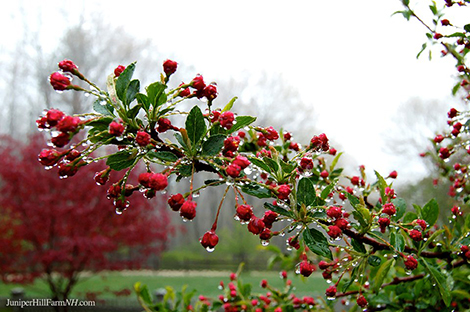 A closeup of the bright red buds of Malus sargentii 'Tina.' 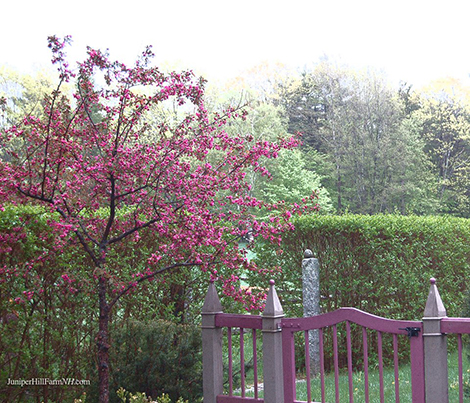 This is crabapple, Malus 'Adams' just beginning its flowering by the pink gate. 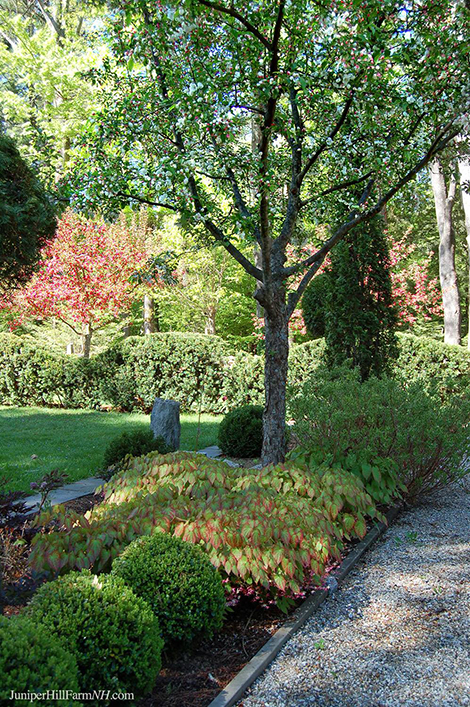 These Epimedium 'rubrum' are loving the dappled shade under this Malus 'Donald Wyman' along a path bordering the 'Zen Garden.'  Donald Wyman crabapples are relatively large, reaching maturity at 15-20' tall.  The tree was discovered as a chance seedling at the Arnold Arboretum around 1950 and named after Wyman, the horticulturist at Arnold Arboretum from 1936 until 1970. 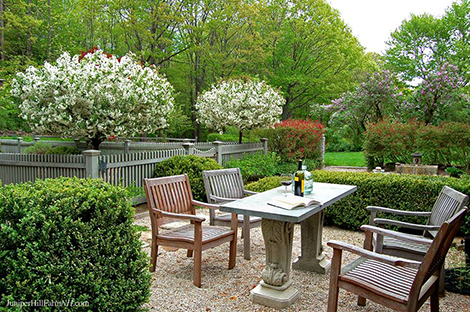 The Tina Sargent crabapples (Malus sargentii 'Tina') in the corners of the little courtyard garden are loaded with so many white flowers now that they look like popcorn balls.  Tina Sargents are 'Sargentii' crabapples grafted onto a rootstock.  Through annual pruning they can be kept small and compact as shown in the photo above.  Malus 'sargentii' are named after the Arnold Arboretum’s founding director, Charles S. Sargent, who first brought seeds of this species to the United States from Japan. 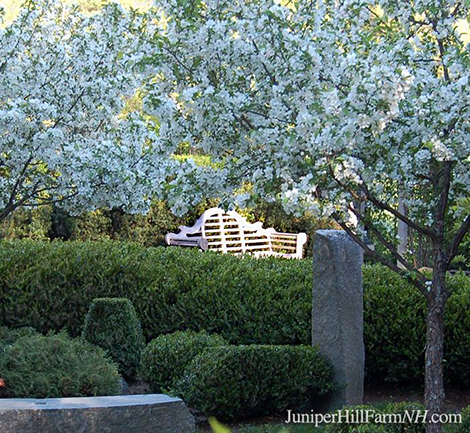 A garden bench is framed by the white flowers of two Malus 'Donald Wyman's'. 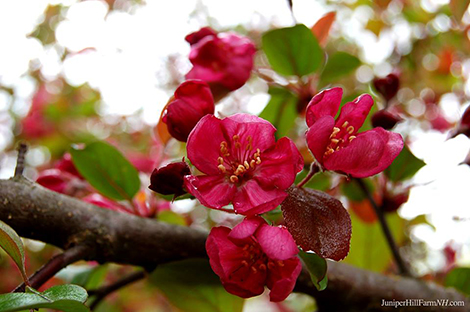 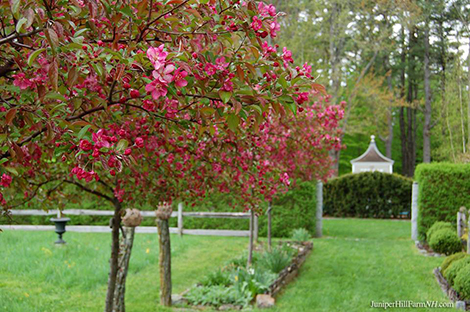 Perhaps our favorite of all the crabapples we have here is Malus 'Robinson.' We have stands of Robinsons lining two sides of the garden. Shown here are four lining the path at the north entrance. Right now, they have beautiful deep pink flowers that can be seen from just about all vantage points within the garden. However, their real appeal for us is their foliage which emerges purple in the young leaves and then turns a wonderful bronze-green, with red veining, for the rest of the growing season. 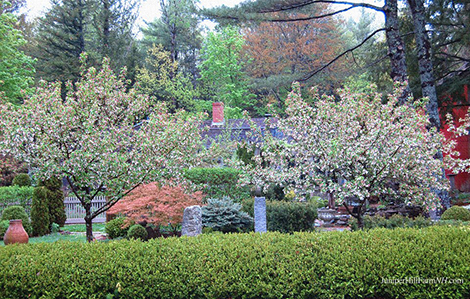 The light and shadows on these two Malus 'Donald Wyman's' give an impressionist feel to this part of the garden. 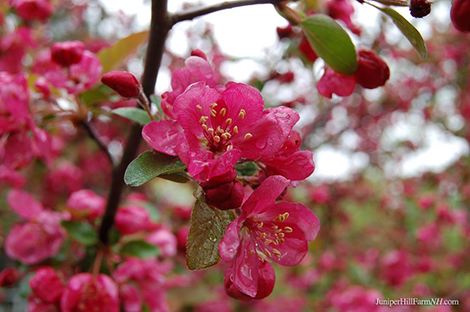 Malus 'Adams', with its deep pink flowers, was introduced about 1947 and named after Walter Adams of Adams Nursery in Westfield, Massachusetts. 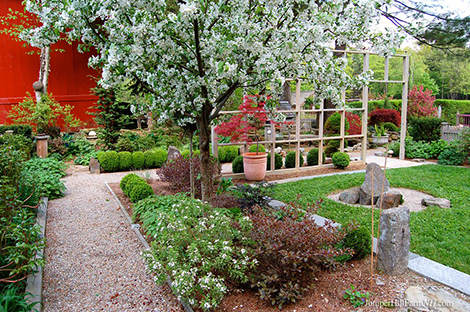 This 'Donald Wyman' crabapple is underplanted with the fragrant Daphne 'Carol Mackie' and sits near the intersection of two paths. 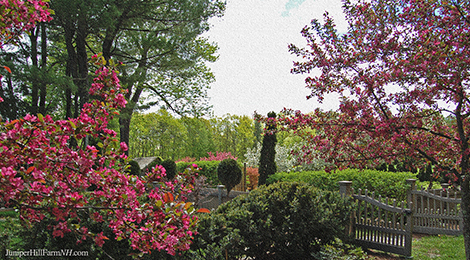 Looking across a section of the garden, it's clear to see how much color is contributed by flowering crabapples inn the spring. 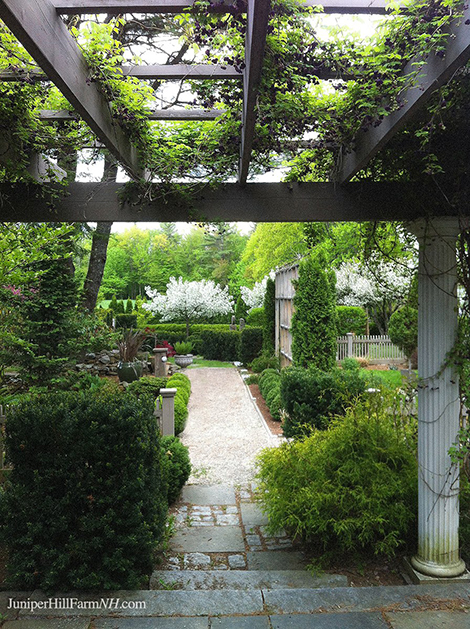 This white flowering 'Donald Wyman' provides a real focal point at the end of the path from the terrace. 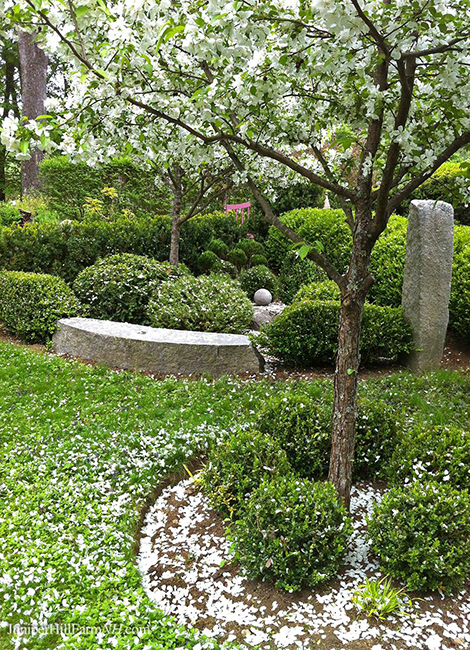 This is not a snowstorm in May but several of our crabapples shedding their bright white flowers.

Posted by Juniperhillfarm at 11:28 AM